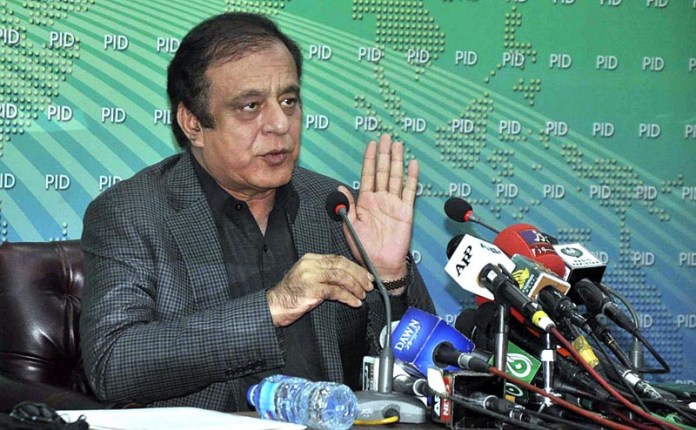 ISLAMABAD: Minister for Information and Broadcasting Senator Shibli Faraz Saturday said the candidates of Pakistan Tehreek i Insaf (PTI) would win the election of Gilgit Baltistan assembly as the opposition had accepted its defeat.

Addressing a press conference here, he thanked the people of Gilgit Baltistan for actively participating in the election campaign in a peaceful manner and for welcoming and responding to the message of the leaders and candidates of Pakistan Tehreek i Insaf.

The enthusiastic response showed that people of Gilgit Baltistan had given their decision in favour of PTI, he added.

He said the people of northern areas had historic participation in the campaign expressing their desire to practically take part in the development of Gilgit Baltistan.

The minister said the political parties which ruled in Gilgit Baltistan in the past did nothing for the prosperity of people.

Pakistan Muslim League (N) forgot that in its tenure it completely ignored the citizens in Gilgit Baltistan, he reminded.

The tenure of PMLN government ended recently and people now wanted to know what it will do for the people in the future, he continued.

The people of Gilgit Baltistan had expressed their love for Prime Minister Imran Khan and the candidates of PTI would win the upcoming elections, he added.

He asked the media to fully cover the election campaign for the GB assembly to be held on Sunday.

PTI was a party which struggled for free and transparent elections in the past and even staged a long sit in for this purpose, he noted.

He said PTI led the efforts for legislation for transparent elections and forced PML-N to carry out electoral reforms.

He said that a special electoral committee was formed for reforms to ensure transparent election process.

The opposition accepted the only election they win otherwise they create drama of rigging, he added.

Speaking about opposition parties, he said that these people were not democratic and even their attitude was also not democratic. He said that a political party was asking a specific institution for help to send the elected government to home.

He said a political party which claimed itself a democratic party wanted to insult the public mandate unconstitutionally. He said that PML-N was heredity party and the so called claim to be democratic was fake.

He said that Prime Minister Imran Khan is the future of Pakistan.

Discussing the economic situation of the country, the minister said that the country was on the right path and good news is coming and more good news would appear in near future.

The minister said that even during Covid-19 pandemic our economic situation showed significant improvement.

He said that petroleum prices were being decreased, adding that industries and currency was showing improvement as well. He said that the inflation also on decline and prices of various commodities would be further decreased.

The minister strongly condemned the Indian violations on Line of Control (LoC). He said the government would raise voice at international forums against the violations by the Indian armed forces.

He also felicitated the Hindu community on special occasion of Diwali.