MALAKAND: PML-N vice-president Maryam Nawaz said on Friday that the fake government of a joker was suppressed under Nawaz Sharif’s narrative and his one speech snatched the rulers’ sleep. 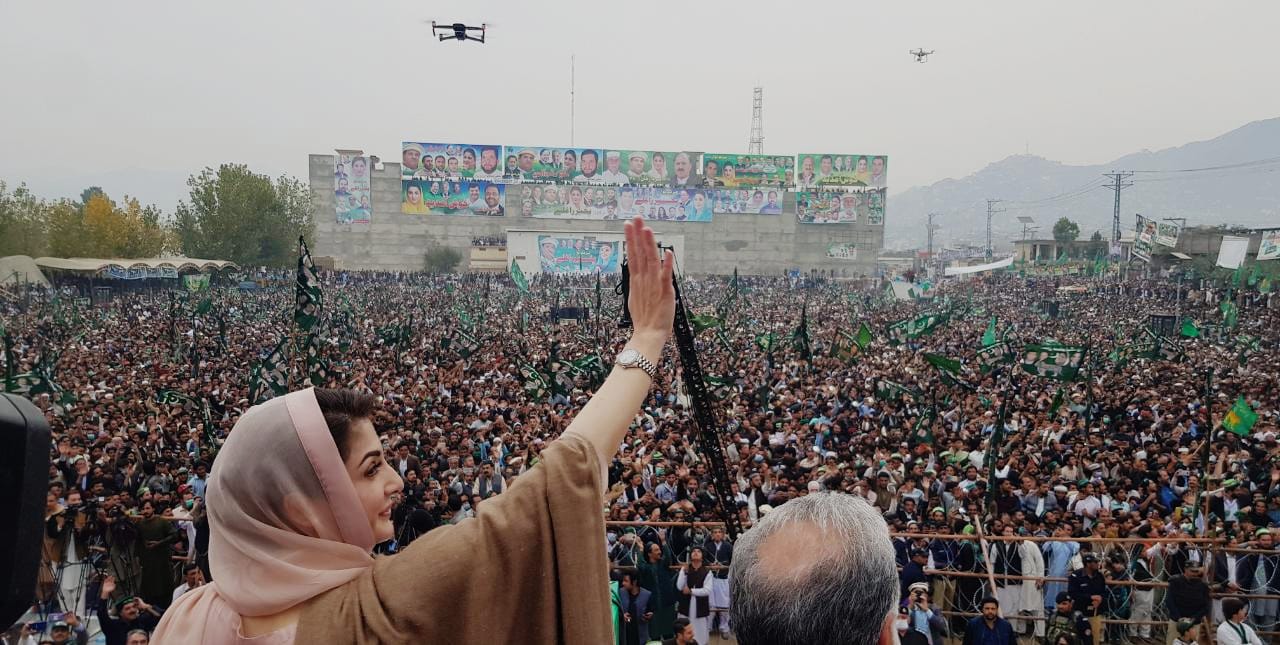 She said that those who named the Metro Bus Services of Lahore and Islamabad “Jangla bus services” constructed the Rs8 billion worth BRT project in Peshawar with a huge cost of Rs124 billion. “Despite spending huge funds on the BRT, it is still incomplete. The buses of BRT seem as helpless as the selected prime minister,” she said, adding that the defected buses of the BRT were a slap on the face of the selected Prime Minister.

She said that the only solution to all the problems of the country was to send the selected government back home and held transparent and fair elections in the country.

“We don’t want to clash with the state institutions but the institutions must not clash with the public too. In Gilgit Baltistan they earlier decided to offer only two or three seats in the upcoming general elections but when they saw the huge number of people in our public meetings, they changed their decision and decided to give seven or eight seats to PML-N,” she said.

“I want to make it clear that if you try to rig the elections you will repent and if you do not rig you will also repent because PML-N will win the upcoming elections in Gilgit Baltistan,” she claimed and said that the country was echoing with the narrative of Nawaz Sharif: honour the vote and do not make a state above the state,” she said and added that it was the duty of everyone to join the narrative of Mian Nawaz Sharif which was the narrative of Quaid e Azam and the narrative of strengthening democracy.

She said that it was such a low character government that they installed hidden cameras in her jail cell and washroom. “I want to tell them to install cameras in NAB so that the nation learns its reality,” she said.

The fake rulers do not know how to give respect to women and this is why they arrest a daughter in front of her father and then tell lies that they respect women.

“When they broke the door of my room in Karachi, they forgot the sanctity of a woman. I am the daughter of Pakistan. Do you want the daughter of the country to be disrespected in such a way?” she said, asking whether it was not the lowest moral standard by people and added that if she was the premier and someone had broken the door of a woman’s room she would resign immediately.

She said that the puppet Prime Minister even did not know about the incident and those who ran the government did not bother to tell him about it.

She censured the statement of the federal interior minister Ejaz Shah regarding ANP and said that it hurt the feelings of families who extended sacrifices for the country.

She said that the fake rulers of Khyber Pakhtunkhwa must learn about the public meeting from today’s huge gathering of people. “Those who conducted a government public meeting must see the sea of people here in the real public meeting,” she said.

“Where is that person who would repeatedly announce that the PTI government would throw 200 billion US dollars on the face of the IMF after Imran Khan would become Prime Minister,” she mocked, adding that the IMF was slapping the government daily.

She said that the PTI government in KP failed to establish a single Forensic laboratory and the tests were sent to the Forensic laboratories in Punjab when an incident happened in KP. “The accountability commission was closed when all the thieves were found in the government’s camp,” she said and questioned about the Malam Jabba scandal that had happened about it.

She thanked the people of Swat for coming in a huge number to welcome her which proved that Pashtuns knew how to give respect to their daughters and sisters.

She expressed her grief over the sad demise of Waqar Seth Chief Justice Peshawar High Court Justice Waqar Ahmed Seth and special prayers were offered for him. “Today the country lost a brave and a fair justice but he will be remembered in history forever,” she said.