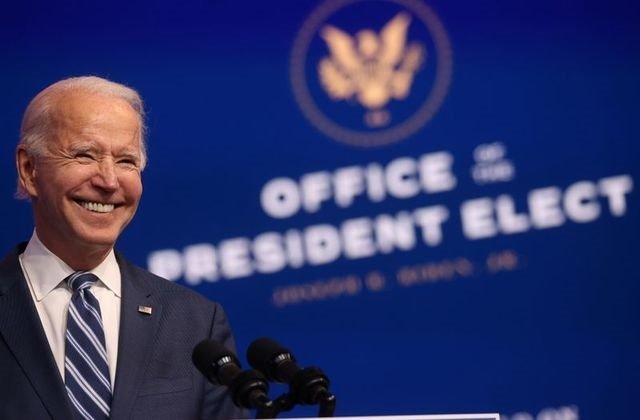 President-elect Joe Biden cemented his electoral victory by capturing the battleground state of Arizona late on Thursday, but the transition to his administration remains in political stasis as President Donald Trump refuses to accept defeat.

Biden was projected to win Arizona after more than a week of vote counting, Edison Research said. He becomes only the second Democratic presidential candidate in seven decades to win the traditionally Republican state.

Biden’s win in Arizona gives the Democrat 290 electoral votes in the state-by-state Electoral College that determines the winner, more than the 270 needed to claim victory. Biden is also winning the popular vote by more than 5.3 million votes, or 3.4 percentage points.

With only a few states still counting votes, the electoral math is daunting for Trump, who has claimed without evidence that the election was marred by widespread fraud.

In order to erase Biden’s advantage, Trump, a Republican, would have to overtake the Democrat’s lead in at least three of the competitive swing states.

The Trump campaign has filed lawsuits challenging the vote counts in numerous states, although some have already been thrown out by judges. Legal experts have said the litigation stands little chance of altering the outcome, and state election officials have said they see no evidence of serious irregularities or fraud.

Trump’s refusal to accept the result of the Nov 3 election has stalled the process of transitioning to a new administration. The federal agency that normally would release funding to an incoming president-elect, the General Services Administration, has not yet recognised Biden as the winner.

His pick for White House chief of staff, Ron Klain, told MSNBC on Thursday that receiving transition funding is important given the US government will roll out a coronavirus vaccination campaign early next year.

“The sooner we can get our transition experts into meetings with the folks who are planning a vaccination campaign, the more seamless the transition to a Biden presidency from a Trump presidency can be,” Klain said.

Biden was set to meet with transition advisers again on Friday as he maps out his approach to the pandemic and prepares to name his top appointees, including cabinet members.

BRIEFINGS FOR BIDEN
Most Republicans have publicly endorsed Trump’s right to pursue court challenges and declined to recognise Biden as the winner. But more signs of dissension began emerging on Thursday.

Meanwhile, a number of Republican senators said the Trump administration should allow Biden to receive classified intelligence briefings, though they stopped short of explicitly calling him the winner.

The incoming commander-in-chief is typically given the briefings to ensure national security is not compromised during the transition.

“I don’t see it as a high-risk proposition. I just think it’s part of the transition. And, if in fact he does win in the end, I think they need to be able to hit the ground running,” Senator John Cornyn told reporters.

Democrats have assailed Trump, and the Republicans giving him cover, for undermining the country’s institutions. In an interview that will air on CBS’ “60 Minutes” on Sunday, former President Barack Obama said Republicans were walking a “dangerous path” by endorsing Trump’s baseless claims of voter fraud.

Biden has taken a measured approach, saying this week he viewed Trump’s claims as “embarrassing” but insisting he was not worried about the impact on his transition to the White House. His legal advisers have dismissed the Trump lawsuits as political theater.

The top Democrats in Congress, House Speaker Nancy Pelosi and Senate Minority Leader Chuck Schumer, on Thursday called on Republicans to accept Biden’s victory and work on crafting a relief package to address the effects of the pandemic, which has killed more than 241,000 in the United States.

A number of states and cities have begun implementing fresh public activity restrictions in the face of a huge nationwide resurgence in cases.