In a recent development in the Khanani & Kalia case, a special court in Lahore has granted bail to over twenty-five accused in the multi-billion-dollar money laundering scam.

249-A Cr.P.C gives the Magistrate the power to acquit accused at any stage of the case if, after hearing the prosecutor and the accused and for reasons to be recorded, he considers that the charge is groundless or that there is no probability of the accused being convicted of any offence. 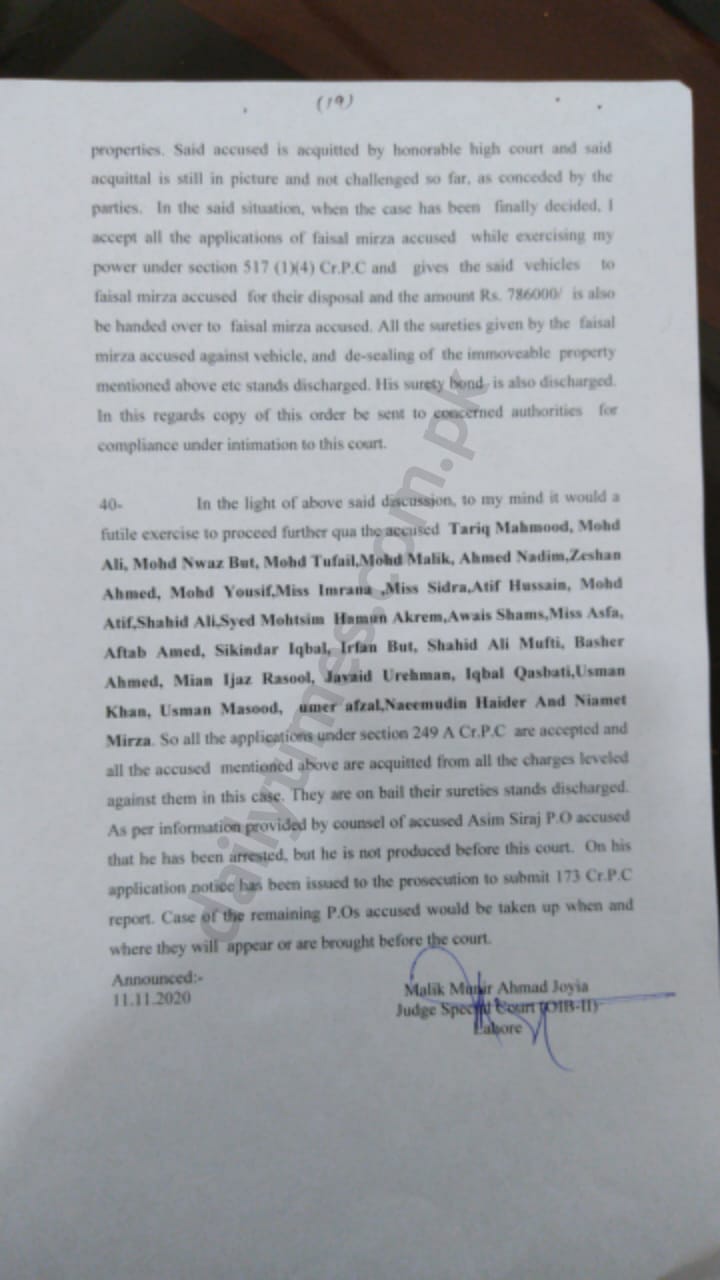 The counsel of another accused Asim Siraj provided the information of his arrest, however he was not produced before the court, upon which the court issued a notice to the prosecution to submit 173 Cr. P.C. report. The court order further declared that cases of the remaining P.Os accused would be taken up when and where they will appear before the court.

The 19-page long verdict mentioned that “main arguments of the counsel for all accused are that the case has been registered by the FIA authorities with malafide intentions to harass the petitioners; that 12 years have been passed and many times the predecessor judges have wrote a letter to DG FIA and concerned authorities to produce the witness but they have failed to produce witness and which they produced, have denied the occurrence; that the trial is being conducted since 12 years approximately but all in vain; that no incriminating evidence has been produced by the prosecution; that till now 47 pws have been recorded by the complainant party but no incriminating material has been produced; that there is no possibility of conviction of the petitioners; that section 5 (2)47 PCA does not attract in the matter because all the accused private person and their firm is a government functionary nor the said firm has caused any legal injury or illegal practice to the state, therefor charges against the accused carries no legal weight, resultantly the charge against the accused becomes groundless.”

FIA arrested Javed Khanani and Munaf Kalia in November 2008, after a report against one of their franchises in Gujranwala unveiled a massive scale money laundering system being run by the company Khanani & Kalia International (KKI). Hanif Kalia, Munaf’s elder brother and the group chairman of the company was arrested a month later, while two other directors Altaf Khanani and Owais Kalia, who lived abroad, could not be apprehended.

US Drug Enforcement Administration arrested Altaf Kalia, one of the world’s most-wanted fraudsters, who has reportedly been involved in money laundering for drug traffickers and terrorist groups, in Panama in September 2015. He was sent to the US where he was sentenced to 68 months in prison.

Khanani & Kalia International (KKI) was banned by the Pakistani government. Multiple money-laundering cases were filed against the company in Karachi, Lahore and Abbottabad, and several persons were booked under the accusation.

Recently, a probe of confidential US Treasury documents led by the International Consortium of Investigative Journalists (ICIJ), known as the FinCEN Files, claimed that Khanani’s network illegally transferred an estimated $14 billion to $16 billion annually for drug cartels and terrorist organizations.