Government, opposition continue to push limits despite calls for negotiations 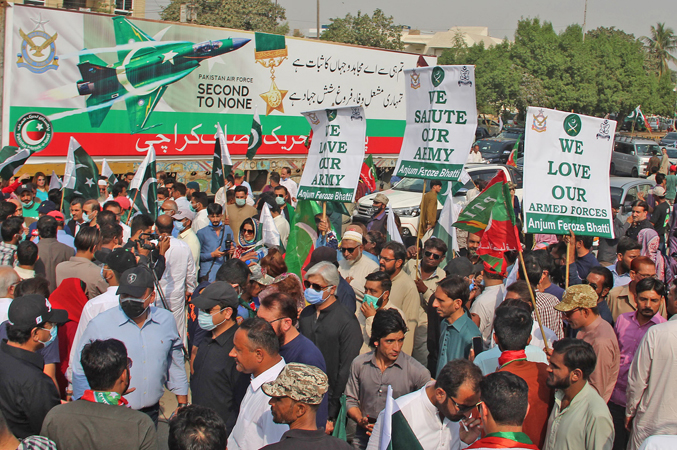 The 11-party Pakistan Democratic Movement’s (PDM’s) initial protest rallies, in Gujranwala, Karachi and Quetta, have cemented its position as a legitimate opposition force and put the spotlight on the government just when the ruling party is struggling to keep a lid on growing public discontent because of rising inflation as well as unemployment.

Since the next rally is scheduled for 22 November 2020 in Peshawar, which gives the government three weeks to come up with a workable strategy, political analysts and trade bodies are urging it to take steps to de-escalate the situation by opening negotiations with the protesting opposition.

But neither side seems willing to back down just yet. The opposition is in no mood to talk because it is sure of toppling the government and the prime minister has simply ruled out any negotiations. “We are very confident that we will be successful,” said Azma Bukhari, PML-N Punjab information secretary, also a four-time Member of Provincial Assembly (MPA) and close confidant of party Vice President Maryam Nawaz Sharif.

“This government has lost the trust of the people because of the way it has mishandled the economy and foreign relations, and it has now become dangerous for Pakistan.”

But despite the increasing number of people that throng to these rallies, the Pakistan Tehreek e Insaf (PTI) government continues to dismiss these outings as irrelevant. “Let’s be clear about one thing; governments do not fall because of such protests,” said Raja Basharat, Punjab Minister for Law and Parliamentary Affairs. “Plus their narrative is very weak since they are not protesting because the people are suffering but because they want to come back to power.” This isn’t the first anti-government alliance in the country’s history, of course, and none of the earlier ones – Movement for Restoration of Democracy (MRD) against the Zia regime, Alliance for Restoration of Democracy (ARD) against Musharraf’s government, and Pakistan National Alliance (PNA), meant to bring down Zulfi Bhutto’s administration – succeeded in achieving the principal aim of removing the government of the day.

“This time will be different because the government will now have to stand against the people in order to stay in office,” added Azma. This, she said, was because things had deteriorated to the extent that most people in the country were struggling to afford even basic necessities of life, including staple food. The prime minister promises every week to use all the state’s might to punish those responsible for what he calls the “artificial price hike,” yet nothing happens and ordinary people continue to suffer.

“When people turn against you, nothing can protect your government,” she said.

So far government officials have gone only so far as to admit that the protests are a minor irritant, because “when we have to ensure fool-proof security for such events, and considering the fact that they can help spread the coronavirus very fast just when the government is trying to prevent a second wave, it naturally leaves less time for more important things like development projects,” the law minister said. But lately they have begun accepting that economic hardships might be a bigger reason for people to attend opposition rallies than sympathy for the opposition or its narrative.

“Some people may well go to the protests because of the economic situation, but that does not mean that they agree with PDM’s position,” he added. The government is aware of this, which is why the prime minister ordered the establishment of Sahulat Bazars to provide subsidised sugar and wheat flour to people. “And as far as their narrative is concerned, my 40-year experience of politics tells me that it is not going to sell in Punjab.”

He represents the Pindi Division, where “every third person is either related to a soldier or a martyr,” and their anti-establishment position will find no traction there. Economic problems faced by the common man, and the government’s utter inability to control prices, have also led the country’s prominent political analysts to see a difficult time ahead for the government, especially if the protests continue to build momentum. “So far these protests are attracting party workers,” said Sohail Warraich, veteran journalist and political commentator. “But if PDM rallies continue at this pace till November-December, which seems very likely, then they would also draw people that are fed up with unemployment, high prices, etc.” That is why he believes the government should turn its attention towards providing relief to the people while also taking steps to start negotiations with the opposition.

Otherwise, a deepening confrontation will only divert the government’s attention away from important tasks and the resulting political uncertainty will hurt the economy. That, in turn, is why trade and investment bodies have urged all stakeholders stop fighting and start talking.

“The government should also not fall in the trap of showing strength by staging counter rallies,” Warraich went on, adding that “it will only further raise the political temperature, which is not good for the country.” Resorting to arresting opposition workers, like the government did after the Gujranwala rally, will only play into the hands of PDM because they would naturally want to drag the protests on at least till the March Senate elections. Yet it might already be too late to try for a thaw because there’s nothing to show that the opposition would be interested in talking anymore, considering the type of response they have got so far from the public. “I visited the entire central Punjab region to mobilise workers before the Gujranwala rally and I have never seen such aggression in the people in my 23-year experience as a politician,” said Sardar Awais Laghari, Punjab general secretary of PML-N.