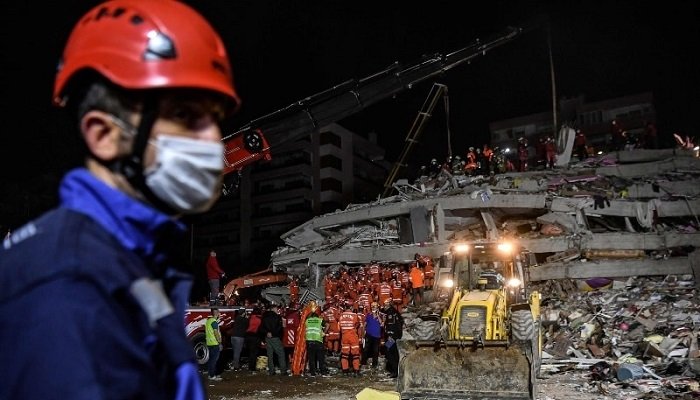 IZMIR: The death toll from Friday’s catastrophic earthquake – that jolted the country’s Aegean coast and Greek islands – rose to 51 on Sunday as rescue officials continue their search operations.

However, miraculously, a 70-year-old man was pulled from the rubble of a flattened building in western Turkey early on Sunday after being buried under the debris for 33 hours.

The man, identified as Ahmet Citim, was rescued from the rubble of the residential “Riza Bey” building, one of the 20 residencies that collapsed during the earthquake.

Officials said 20 buildings were destroyed in Izmir’s Bayrakli district which was in the process of urban transformation due to lack of earthquake resistance.

Turkey is crossed by fault lines and is prone to earthquakes. In 1999, two powerful quakes killed 18,000 people in northwestern Turkey.

The Friday earthquake, which the Istanbul-based Kandilli Institute said had a magnitude of 6.9, was centered in the Aegean Sea, northeast of Samos.

President Tayyip Erdogan said 885 people had been injured, 15 of them critically.

‘I will play violin for you’
Sixteen-year-old Inci Okan was trapped under the rubble of the same 8-story building as the elderly man before being rescued 17 hours after the strong quake, along with her dog Fistik (Pistachio).

Emergency worker Dogan had held the girl’s hand while rescue teams removed the debris above her.

“I am very happy. Thankfully my father was not at home. My father couldn’t fit there. He would hurt his head. I am tiny. I am short so I squeezed in and that’s how I was rescued. We stayed home with my dog. Both of us are well,” Okan said from her hospital bed.

Okan promised to play the violin for Dogan after being discharged from the hospital.

“I will play the violin for you, I promise.”