PML (N) and Pakistan: Caught in a Bad Romance 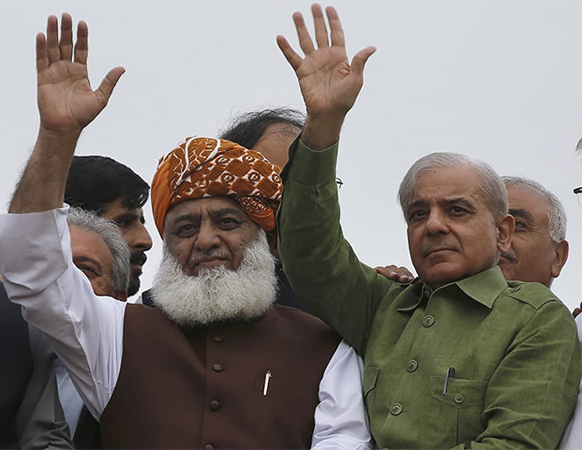 The behaviors of the individual involved characterize a toxic relationship. Primarily it is a relationship where the toxic partner physically and emotionally damages the other companion, often the sincere one. Usually, the parties involved don’t realize that they are in an unhealthy relationship until the damage done altogether, and they are finally out of it. A healthy relationship is supportive and nourishing, whereas a dysfunctional relationship is poisonous and malicious. It adversely affects an individual’s self-esteem, will to carry on, and trust in one and another.

Moreover, it is hard to accept that the relationship is toxic, and must end, which increases the agony experienced during it. Toxic relationships are not exclusive to the emotional attachment between individuals. History has witnessed it between leaders and their followers, which reshaped nations’ history and reshaped the world in many cases.

Presently Pakistan is experiencing one such bad relationship between PML (N) and its followers. Mian Muhammad Nawaz Sharif is the longest-serving prime minister of Pakistan, who was elected for three non-consecutive terms. Sharif has served a total of more than nine-year as the prime minister of the country. He enjoys people’s love and attention as the head of one of the largest political party PML (N). Pakistan’s formal prime minister was serving a prison sentence against corruption charges when he had to leave for the UK to treat his unexplained, strange and alarming medical condition. Currently, in the UK, Nawaz Sharif is proactively running an opposition campaign, with the support of PDM under the leadership of Maulana Fazal-ur-Rehman. Nawaz Sharif and PML (N) aim to gain a lot from this campaign and are willing to go to any limit to regain power. The present times have shown that the relationship between PML (N) and Pakistan’s people is toxic, venomous, and poisonous to its true meaning. The PML (N) abuses the follower’s love, attention, and respect for the leader for its gains, with no consideration for the country and its people.

It all reached its climax when on 28th October 2020, the former speaker of Pakistan National Assembly and a PML (N) leader Sardar Ayaz Sadiq issued a ticket to victory for the BJP government in the Bihar Legislative Assembly election currently commencing (28th October to 7th November). He twisted the facts relating to Wing Commander Abhinandan Varthaman, the Indian Air force fighter pilot held captive in Pakistan for 60 hours after his aircraft was shot down during the 2019 Pakistan-India standoff. The party is seemingly willing to compromise Pakistan’s integrity and honor for the petty self-gains. One of the main features of a dysfunctional relationship is that it is practically impossible to qualify on the scale of accomplishment. Even the most captivating achievement can easily be presented as a sour in the eye like done in this case. An honor won hard is put forward to the world as a moment of embracement for the nation on a prestigious platform. Not only that, it has given a new life to the Indian army, which has been humiliated on multiple fronts in recent times, let it be February 2019 or 2020 India China standoff. It is not the first time that national integrity has been compromised by the PML (N) leadership. Dawn leaks and 2018 Cyril Almeida interview of Nawaz Sharif are still echoing in the recent past as opportunistic ventures trading off the country’s honor and integrity. With every new day, there is a continuous abuse of national integrity and glory at the hand of PML (N), with end unknown.

Nawaz Sharif emerged as the most decisive leader in the country when he won the 2013 election with 16 more votes than a 2/3 majority. It was a time when he could have done wonders for the country, but sadly it was not how the story turns. Nawaz Sharif has misused the nation’s resources, people, opportunities, and geopolitical positions for his advantage, which is reflected by the multifold increase in the personal and family wealth. Sadly, this abuse is continuous and spontaneous, without an iota of shame or consideration. The PDM platform uses all the fair and unfair arguments, which can serve their purpose, and it seems that they cannot stop abusing.

The controlling relationship lacks accountability. The pernicious ally enjoys unjust privileges in a relationship. He/she is not accountable for his/her actions. Moreover, virulent partners make the other companion believe that he/she deserves to be in such a compromised condition. PML (N), Nawaz Sharif, and his family believe that he deserves to rule the country. They are not answerable as they are the ruling family, as they like to address themselves. Pakistan’s economy has gradually declined during the last 35 years, but no one can dare to ask them what happened and how? How the country fell to the depths of poverty, both financially and morally? How the country went down the drain? On the other hand, the personal wealth of national leaders continues to proliferate. The details are all lost in the black holes of accusations and illogical arguments.

The noxious individual in the relationship aims to isolate the other party by pushing away all the well-wishers, mainly who can protect the companion in any way. PDM shows a severe dislike for the vital institution in the country, such as Pakistan’s military. PDM is instigating a divide between the ranks and the army. They want to split and ruin the Pakistan army as it is the backbone of the country. The aggressive neighbors, the geopolitical state, and the clash of titans (China and the USA) have increased the government’s challenges. In this situation, confronting the Pakistan army is not a favor. At present, facing the army may lead to weakening Pakistan as such. The PML (N) wants to again manipulate the situation in their favor and is willing to compromise the country’s well-being, present, and future.

For a detrimental individual, ending an abusive relationship is very difficult. They drag the relation and focus on hurting the other side to the maximum. They ally with the enemies, reveal secrets, and abuse the accomplice emotionally. This is what we are witnessing from the PDM platform commonly and PML (N), primarily without any exaggeration. Presently the politics of desperation is on its top. From CPEC to Baluchistan, aspects which are valuable to the country, our friends and foes abroad are discussed ruthlessly. The opposition aims to gain the global establishment’s attention without considering its adverse impact on the people of Pakistan and our motherland. Pakistan is not a priority for these opposition political parties. They have ripped us off from the Asian tiger to beggars barely surviving. The country’s situation is nothing more than an opportunity to bargain and gain some advantage. There is not a single question answered, and the nation is expected to embrace the condition they are in as a blessing and Nawaz Sharif as their ultimate leader and a savior. The state secrets are being tabled to the foreign establishment mercilessly. National security issues are being discussed on these platforms and then bashed on the Indian national media. The situation is becoming more alarming with every passing day, and the PDM is raising the bar every time they hit the stage. They are willing to compromise Pakistan’s safety, security, and prosperity.

PML (N), Nawaz Sharif and his family expect the people to confront their army and make sacrifices to gain their desired advantage. The hereditary political parties have new leadership all set to take over. These young leaders are even more pitiless and stony-headed. They are impatient and want to have it all in no time. The shift towards a more aggressive approach is evident and expected to become more hostile. A radiant example is Maryam Nawaz showing solidarity with the terrorist and Baloch separatist openly under the umbrella of a missing person during the PDM third rally in Quetta. There is an argument that we should separate the leadership from PML (N). A leading political party should not be marginalized. For that, the party has to take the initiative and make the leader accountable. MQM, with the baggage of its past, has now parted away from Altaf Hussain. It was taken with skepticism, but it is commendable. On the other hand, PML (N) is the captive of the echo chamber, where they have to do the derange control after the virulent leadership speeches. So can we, on our own, differentiate the leadership voices from the party?

It is now fair to say that PML (N) and the people of Pakistan are caught in a bad romance. At this time, the people are lost in love for the party, and are listening and absorbing what is offered to them. Currently, the venom is at its peak, and the people fail to understand and realize how to react. They are in a state of limbo. Furthermore, the path opted by PML (N) can have a devastating impact on the people and the country. Time will reveal its toxicity when this codependent relationship will finally be over, and this breakup will eventually happen.