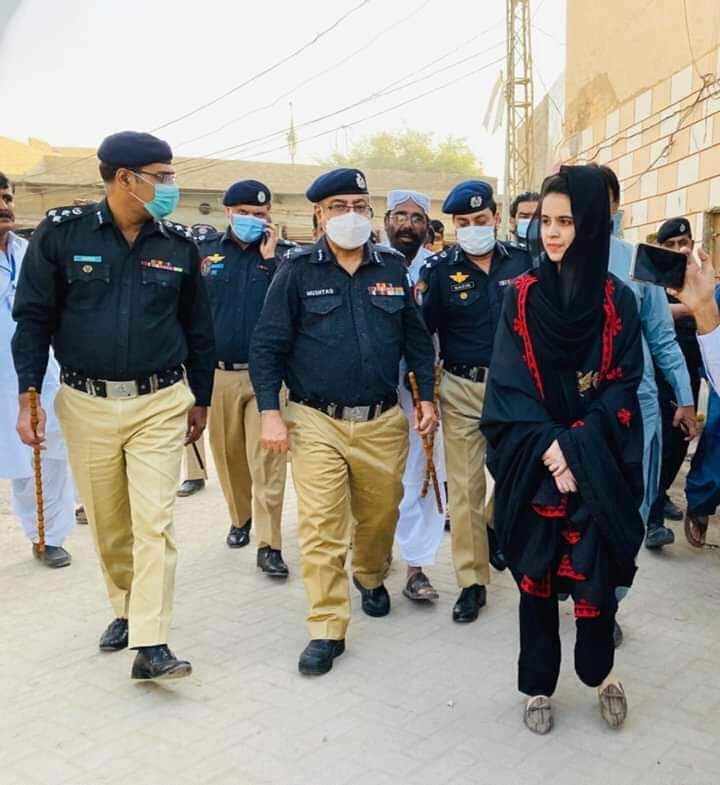 The then UC chairman, Raees Karamullah Chandio, and his two sons, Mukhtiar and Qabil, were killed in an attack on their residence in Mehar town by a group of armed men on Jan 17, 2018. One of the attackers was also killed in retaliatory firing from inside the house. The attack was alleged to have been carried out at the behest of Chandio chieftain MPA Sardar Chandio and his younger brother, Burhan Chandio, the then adviser to the chief minister. Both, the aggrieved and accused, sides belonged to the PPP.

While MPA Sardar Chandio and Burhan Chandio are at large on bail, two other nominated suspects, Sikandar and Ali Gohar are in police custody whereas Zulfiqar and Murtaza are absconding.

Deceased Mukhtiar Chandio’s daughter, Umme Rubab, has been pursuing the case. Recently, Supreme Court ordered the IGP to personally appear before it on Nov 10 to explain why the two absconding accused could not be arrested so far.

Umme Rubab alleges that those involved in the attack had been roaming freely and hurling death threats to other members of the bereaved family.

a strong contingent of police drawn from seven police stations of Dadu and Qambar-Shahdadkot districts launched a massive operation to apprehend Zulfiqar and Murtaza. However, after 24 hours of search, a statement issued by the Sindh police said that the absconder escaped when the raids were conducted in different areas.

The police had already cordoned off all link roads in Khairpur Nathan Shah and Mehar talukas and surrounded many localities in the mountainous areas of Dadu district. They also set up check posts at different places, including Shah Godrio, Faridabad and Gartal, to mount a hectic search operation.

There were conflicting reports about whether a search of MPA Sardar Chandio was conducted.

Umme Rubab told Daily Times that the accused were so influential that the area people never dared to lay hands on them.

The IGP, who has established camps in Mehar and Larkana, kept moving from one place to the other to supervise and monitor the operation.

He along with the two DIGs also visited Karamullah Chandio’s residence to inspect the crime scene and assure the affected family of all-out efforts to apprehend the absconding suspects.

Reacting to the police operation, MPA Sardar Chandio repeated that he and other accused had been implicated in a false case. He argued that he had already obtained bail and been regularly appearing in courts on the dates of hearing but even then police resorted to searching his residence. He also recalled that their names had been removed from the FIR at the early stage of the probe. He described the police action as political victimisation.

He said he would file a petition in court against the police action.

‘No one is above the law’

On his part, the IGP speaking to the media said he would share details of any progress, made in the operation, with the media at a press conference soon. He said no one was above the law and anyone involved in the attack would be arrested and taken to task.

PPP workers and Chandio clansmen held demonstrations in Qambar and other towns of Qamber against the police action,

The protesters were led by PPP city representative Liaquat Gopang and Iqbal Brohi.

Sindh PPP president Nisar Ahmed Khuhro, who is also Adviser to the Chief Minister on Universities and Boards, in his statement condemned the police for “laying a siege and conducting a search of” MPA Sardar Chandio and Burhan Chandio’s houses in Qambar and Gartal. He said Sardar Chandio was on bail in the case whereas the name of Burhan Chandio was removed from the FIR; despite the fact, police carried out a search which amounted to violation of chador and char deewari.

He condemned that in contravention of human rights and Constitution, police were out to harass the persons close to them [accused]. “Police are perhaps pleasing someone with such action,” he noted, and said that search of assembly members’ house by police was breach of their privilege.

Meanwhile, there were reports from Qambar that very near to Sardar chandio’s four SHOs — Manzoor Chandio, Salam Chandio, Yahya Chandio and Imdad Chandio of the Drigh, Warah, Hamal and Gaibidero police stations, respectively, had been transferred forthwith.