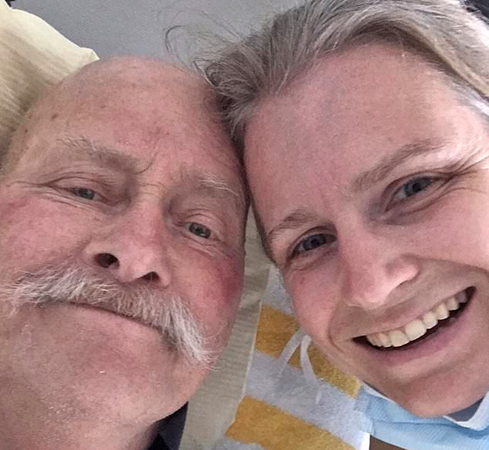 Astrid Magenau wasn´t able to keep a promise to hold her father´s hand at his deathbed in Germany because of Australia´s extraordinary pandemic restrictions that make her feel like a prisoner in her adopted country.

Australia has sought to prevent new coronavirus cases from reaching its shores by banning most of its residents from leaving in the first place. But the ban on overseas travel creates a heartbreaking burden on a multicultural nation such as Australia, where around half the people were born abroad or have an immigrant parent.

“I always wanted to move to Australia because it felt like a free country,” said German-born Magenau, who became an Australian citizen this year. “It makes the whole feeling of living in Australia quite different because, personally, it makes me feel like I´m trapped … because I can´t travel as I want to.”

Prime Minister Scott Morrison has held up Australia´s travel ban as an example to the world of how to avoid severe coronavirus spikes caused by citizens who are infected while on vacation. Still, Australia is the only member of the Organisation for Economic Cooperation and Development – a group of 37 developed nations – that has banned its citizens from leaving during the pandemic.

Morrison has described the ban as “uncontroversial.” But with Australia becoming one of the most successful countries in containing the spread of the virus, some are questioning how long the ban can be justified.

Australia, with a population of 26 million, had recorded 27,541 virus cases, including 907 deaths, as of Wednesday – with 74% of the cases and 90% of the fatalities coming in the city of Melbourne and surrounding Victoria state. But Melbourne came out of lockdown on Wednesday, with authorities confident they have contained community transmission.

Government lawmaker Dave Sharma, who has represented constituents seeking his help to be allowed to travel, describes the ban as a “pretty extraordinary restriction on people´s liberty” that cannot continue “for the long term.”

While some exemptions are allowed under strict criteria, critics argue that the process lacks transparency and consistency, and that the process can be too slow. Magenau, a 42-year-old cancer research scientist, was given an exemption to travel with her 5-year-old son, Hendrix, from their home in Sydney to Stuttgart, Germany. But the weeklong process to get the exemption was too slow for a medical emergency. She didn´t reach Germany until after her 76-year-old father, Horst Magenau, had already been cremated after dying from metastatic melanoma.

“He became worse. We thought he was stable,” she said. “He lived for about five or six days and I thought I could make it out (of Australia), but that didn´t work,” Magenau said.

The funeral could not be delayed until she arrived.

“I wasn´t actually able to say goodbye to his body,” Magenau said. “It sounds silly, but that´s what I had wanted.”

She described the ordeal as “traumatic as it was unnecessary.”

Sydney lawyer Adam Byrnes said by far the majority of clients who come to him to fight travel exemption refusals had applied, like Magenau, on “compassionate or humanitarian” grounds. Applicants must persuade Australian Border Force officials that their reasons are “compelling.”

“We´ve had clients come to us where they wanted to say goodbye to their parent who is terminally ill and has been given a prognosis of a short time to live, and they´ve been refused a couple of times for immediate travel,” Byrnes said. “That in my eyes is a very compelling reason, but not in Australian Border Force´s eyes.”

Byrnes, who did not represent Magenau, said the major flaws in the system are a lack of public policy information, inconsistent results and a lack of explanation of the reasons for refusals. Donna Burton had already reached Sydney Airport when she was advised that Border Force had denied her an exemption to fly to London for her only daughter´s wedding in July. She had made a second application for a travel exemption after the first was rejected because of a lack of supporting documentation.

Burton has sympathy for the health outcomes that Australian authorities are trying to achieve. But she said it would be easier to accept if Border Force´s decisions were more timely.

“A lot easier than going to the airport with lots of wedding presents in a bag – yes, without a doubt,” she said.

Many would-be travelers don´t have the time or the means to fight exemption refusals in the courts.

Esther and Charles Baker, an ultra-Orthodox Jewish couple from Melbourne, were twice refused exemptions to fly to New Jersey to attend their youngest son´s wedding on June 23. They appealed to the Federal Court, citing religious and cultural reasons among their exceptional circumstances. But a judge dismissed their case and ordered the couple to pay Border Force´s legal costs for their challenge. Some categories of Australian citizens and residents automatically qualify for permission to travel.

US citizen Michelle Parker is a flight attendant, and Australia considers her an essential worker who flies between her Sydney home and San Francisco.