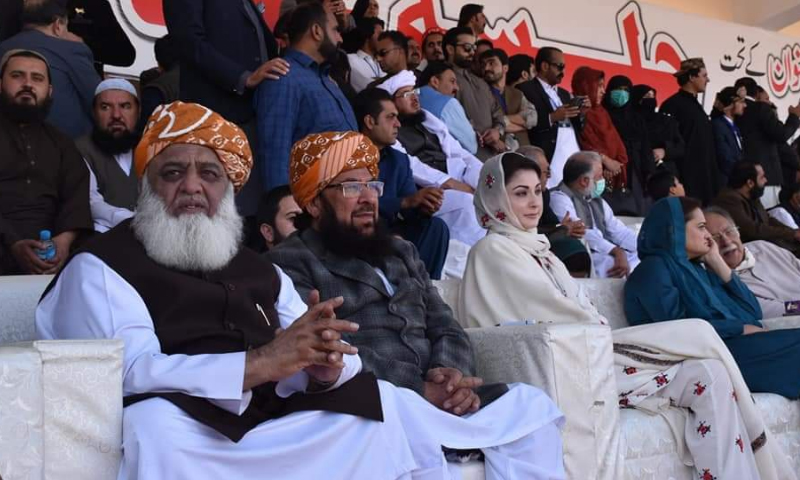 Balochistan government’s spokesperson Liaquat Shahwani on Monday slammed the Pakistan Democratic Movement leadership and said that they had ‘never’ worked for the province’s development during the two lead parties’ respective tenures.

Addressing a press conference in Quetta, he targeted PDM chief Maulana Fazlur Rehman, PML-N vice-president Maryam Nawaz, PPP chairman Bilawal Bhutto Zardari, and Balochistan National Party-Mengal chief Sardar Akhtar Mengal. “I have said this before as well. These people do not love Balochistan,” he said, adding that the PDM had only made what may be termed hard-hitting speeches, however, had shed no light on the development works that had taken place during their tenure. “The people of Balochistan did not take their jalsa seriously.”

He said that PML-N had ruled the country thrice and had a government in Balochistan as well. “But they could not count even a single project to their credit. Fazlur Rehman lost the election in Dera Ismail Khan and came over to Balochistan to take out his anger,” Shahwani remarked, adding that PPP had also not initiated a development project in the province that was worth mentioning. “The Balochistan government never got into the blame game,” he added.

Lashing out at Maryam, he said that her speeches had begun and end on just the words “shame, shame”. “The post of the chief minister was abused […] speeches were made against the Constitution,” Shahwani said, adding that the reasons for Balochistan’s impoverishment were sitting side by side in the Quetta jalsa. “When Jam Kamal Khan was a federal minister in your [PML-N] government, you respected him,” he added.

Turning his guns on to PML-N supremo Nawaz Sharif, he said that he was disqualified due to Panama and Iqama. “To vent his anger, he came to Balochistan.”

In BNP-M’s All Parties Conference people kept asking about CPEC, however, Ahsan Iqbal “had the file tucked under his arm” and did not answer any of the queries, he said. Even Mir Hasil Bizenjo was “unaware” of the CPEC projects, the spokesperson said.

Shedding light on the government’s plans for Balochistan, he said that power projects and the construction of roads are underway. “Ten new social welfare projects have been started.” “We respect the leadership of all political parties,” Shahwani said, adding: “But the people of Balochistan believe that no plan for the future was put forward.”

The spokesperson said that the PDM leadership had opted for a non-serious attitude in yesterday’s jalsa and that the government could hold jalsas that are ten times the size of theirs, however, it is focused on working for the province’s betterment and so refrains from making speeches.

“The process of development that we have started in Balochistan has never happened before,” the spokesperson said.

Shahwani expressed satisfaction that the PDM jalsa concluded without any untoward incident taking place. “It was unfortunate that the PDM leadership did not take our request to delay their rally seriously.” The spokesperson said that after the National Counter Terrorism Authority’s (NACTA) warning of a terrorist attack in Quetta, the government’s responsibility had increased.”We made foolproof security arrangements for the PDM rally […] the Balochistan government remained on alert yesterday,” he said. Condemning the bomb blast that took place in the provincial capital leaving at least three dead, he said that the elements involved in the bombing would not be spared.