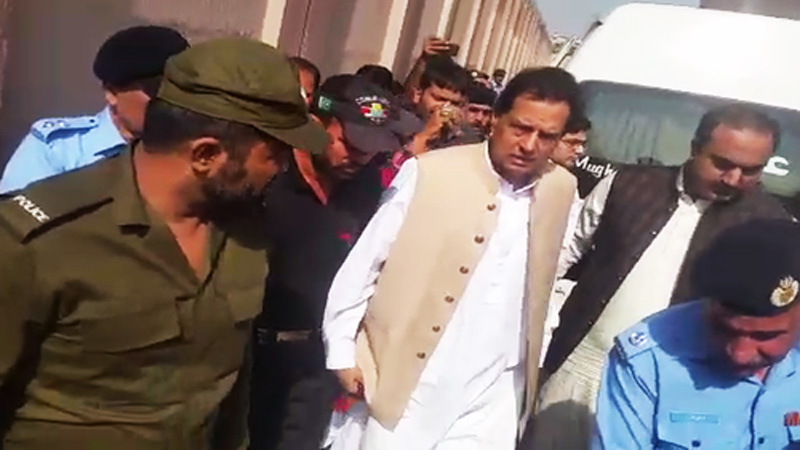 Special Assistant to Prime Minister on Political Communication Shahbaz Gill Saturday said the arrest of Capt (r) Safdar from a hotel room in Karachi is an orchestrated drama of opposition after it failed in getting ‘NRO’ from Prime Minister Imran Khan.

Speaking at a press conference here, he said after the incident, Bilawal Bhutto Zardari reportedly got angry and he met with Inspector General of Police Sindh and subsequently police officers applied for leave. Then leaders in opposition asked the army chief, ISI chief and others to hold inquiry into the matter, he added.

He said for the last 40 years, two families are lying to the nation, instigating falsehood and giving impression as what they were saying it was all truth. Maryam Safdar tried to use Baloch students whose issue of scholarship was resolved by the Governor Punjab, he added.

He said Nawaz Sharif, Shehbaz Sharif and Maryam Safdar are involved in corruption and they want people to accept their lies. He called Maryam Safdar a certified liar and fraudster who was lying all the time, adding these people had gone berserk to achieve their interests. Supreme Court of Pakistan wrote in its verdict that Maryam Safdar had submitted fake documents and she was declared a certified liar and also got involved Safdar Awan and her brother in her activities, she went on to say. After coming out of jail, Maryam Safdar is creating narrative against the institutions, he asserted.

Gill said Maryam cried before others when she was not allowed to go abroad. She wanted to go out from jail on the pretext of taking care of her father in London, he said. Maryam wrongly claimed that her room door was broken in a hotel in Karachi and then channels were given wrong information and they tried to build a narrative against the institutions. In reality, the door was opened from inside to orchestrate a drama, he added.

He said a private cameraman hired by Maryam Safdar is making all the videos at the time of arrest of Safdar Awan in the hotel corridor and reception. The footage and video was issued from the channels of their choice. Maryam Safdar was not given admission in the medical colleges and her level of critical thinking is not upto the mark, he said.

He recalled that Sharif brothers threw indecent pictures of Benazir Bhutto from the airplane. Everybody saw the hooliganism of Safdar Awan and others at the mausoleum of Quaid e Azam, he reminded. It seems that with the arrest of Safdar Awan, Bilawal Bhutto has taken revenge from the Sharif brothers, he remarked.

He said the Indian media used the Karachi incident to unleash propaganda against the institutions and Pakistan army. The enemies of Pakistan were targeting China Pakistan Economic Corridor (CPEC) and the Pakistan army. He said workers of Pakistan Muslim League(N) and others were calling Maryam Safdar Madar-e-Millat. The journalists and television channels favouring the opposition were magnifying the lies of Maryam Safdar by following a planned script, he added.

He said Maryam Safdar and her family are trying to prove that they were innocent and attempting to save the wealth accumulated through corruption. He said Nawaz Sharif should come back from London and undergo sentence given by the courts. “Nawaz is lying and he is not a revolutionary as claimed by his supporters. Nawaz Sharif never had a smooth relationship with the army chiefs and chief justices. Nawaz wanted complete autonomy to commit corruption but he will not be allowed to do so,” he added, and declared that Prime Minister Imran Khan will bring back Nawaz Sharif from London.

He said justice was not done in the case of Model Town incident in which even pregnant woman was shot dead, adding the well-known character Gullu Butt had said that Nawaz Sharif was not a revolutionary and he (Gullu) sided with the national institutions of the country. He assured that the government would bring down prices of essential items, control the inflation and would move the economy in the right direction and resolve problems of the people.