Opposition has no moral ground to launch anti-govt movement: Shibli 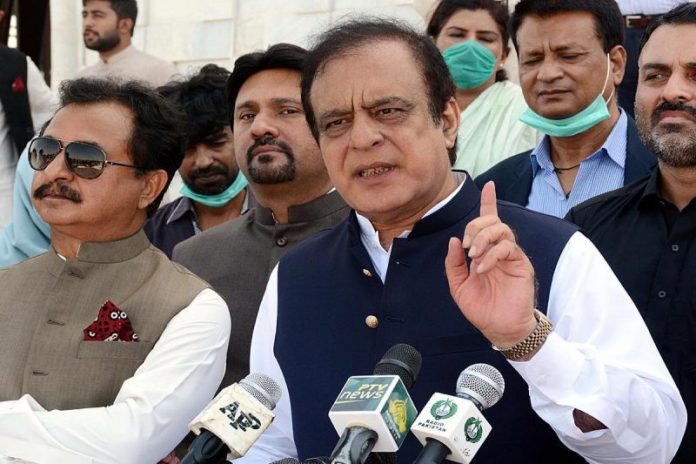 KARACHI: Federal Minister for Information and Broadcasting Senator Shibli Faraz on Wednesday said the Pakistan Tehreek-e-Insaf (PTI) had been given mandate by the people to bring those who had
plundered the national wealth to justice.

The opposition parties had no moral ground to launch the anti-government movement. which was in fact aimed at saving their corrupt leadership from accountability, he said while talking to the media here at the Mazar-e-Quaid.

The minister said the main objective of the opposition leaders to hold public gatherings was to secure their personal interests. The leadership of both the Pakistan People’s Party (PPP) and the Pakistan Muslim League-Nawaz (PML-N) were using different tactics to hide their corruption.

The PTI government, however, would not make any compromise and continue accountability of the corrupt elements, he added.

He said since the breakout of COVID-19 pandemic, the opposition parties had not taken any step favourable for the country and the people. The government, however, taken measures keeping in view ground realities to contain the pandemic and now the situation in Pakistan was much better than other countries.Shibli Faraz said the past regimes had ruined the state institutions.

The incumbent government, which had completed two years in office, was making all-out efforts to steer the country out of crises and put it on the path to development. Everyone would have to work for the country’s development.

He said Karachi was the country’s economic hub and despite limited resources, the Federal Government had initiated many development projects in the city such as K-VI, Karachi Circular Railway and sewerage system.

They were working to resolve big issues being faced by the people of the Sindh metropolis, who had elected many PTI candidates during the last general election, he added.

Like the mega city, he said, the PTI government also accorded importance to the development of other areas of Sindh to bring them at par with the rest of the country.

Unfortunately, the Sindh government was not playing its due role in that regard, he regretted.

Replying to a question regarding the problems faced by the Karachiites due to the recent rains, Shibli Faraz said Prime Minister Imran Khan had directed for taking immediate steps to resolve them.

To another question regarding issuance of an ordinance about islands, he said the Federal Government had not taken any unconstitutional step as everything was being done for the development of the province. The issue of islands was being politicized.

The minister said when the PTI government took charge of office, the country’s economy was in a shambles and it was feared that it might default on its international financial obligations. Despite challenges, the government under the leadership of Prime Minister Imran Khan took wise steps to bring the country out of the crisis, he added.

To a query, he said a mechanism was being evolved to resolve the issues being faced by the media.