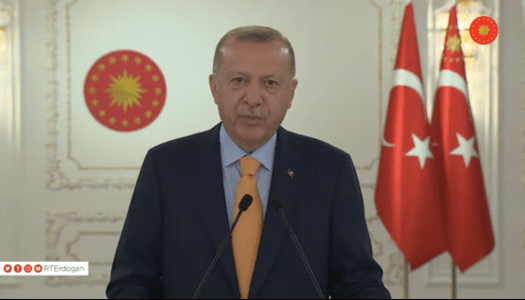 UNITED NATIONS: Turkey told the UN General Assembly on Tuesday that the Kashmir dispute between India and Pakistan was a “burning issue”, and called for resolving it through dialogue.’

“The Kashmir conflict, which is also key to the stability and peace of South Asia, is still a burning issue,” Turkish President Recep Tayyip Erdogan said in a speech he made via video-link to the 193-member Assembly’s landmark 75th session.

“Steps taken following the abolition of the special status of Jammu-Kashmir further complicated the problem,” he said, referring to the August 5, 2019, unilateral move by India to annex the disputed territory.

“We are in favour of solving this issue through dialogue, within the framework of the United Nations resolutions and especially in line with the expectations of the people of Kashmir,” the Turkish leader added.

The Kashmir dispute between is on the agenda of the UN Security Council, which has adopted at least 11 resolutions since 1948 that call for an impartial plebiscite to determine the wishes of the people in the disputed state.

On Sunday, the OIC Contact Group on Jammu and Kashmir, which met in New York, voiced “deep concern” over the continued human rights violations by India in occupied Kashmir, and called on UN Secretary-General Antonio Guterres, the Security Council and the Human Rights Council to take steps to end those abuses.

Conveying a special message of the Foreign Minister Qureshi to the meeting, Pakistan’s UN Ambassador Munir Akram stated that the RSS-BJP regime in India was implementing what its rulers had themselves called a “Final Solution”.

The regime was engaged in systematically engineering a demographic change in IIOJK through new domicile rules, he said. The issuance of 1.6 million domicile certificates (since March) was meant to change the demography of IIOJK from a Muslim majority into Hindu majority territory.

In his forthright speech, the Turkish president also called occupation and oppression in Palestine a “bleeding wound of humanity,”

“The dirty hand that reaches the privacy of Jerusalem, where the sacred places of the three great religions coexist, is constantly increasing its audacity, Erdogan said.

“The Palestinian people have stood up against Israel’s policies of oppression, violence, and intimidation for more than half a century. Upon rejection of the document of surrender, which was tried to be imposed on Palestine under the name of ‘Deal of the Century’, Israel this time accelerated its attempts to “have the inside track” with the help of its collaborators.”

“Turkey will not support any plan that the Palestinian people do not give consent to,” the Turkish president said.

“Participation of some countries of the region in this game does not mean anything beyond serving Israel’s efforts to erode basic international parameters. Countries that have declared their intention to open Embassies in Jerusalem, in violation of the United Nations resolutions and international law, only serve to make the conflict more complicated with their actions.

“The Palestinian conflict can only be resolved with the establishment of an independent, sovereign, and contiguous State of Palestine based on the 1967 borders with East Jerusalem as its capital. Seeking solutions other than this are in vain,” he added.