The peace talks between the Afghan government and Taliban insurgents are underway in the capital of Qatar.

The start of negotiations aimed at ending two decades of war that has killed thousands of combatants and civilians.

During peace deal, the Afghan Taliban have several time lauded on media that they will not let anyone to use their land against anyone. In this regard, a delegation of afghan Taliban met with Tahreek Taliban Pakistan (TTP) leadership to briefed them on the terms and condition in Afghanistan. 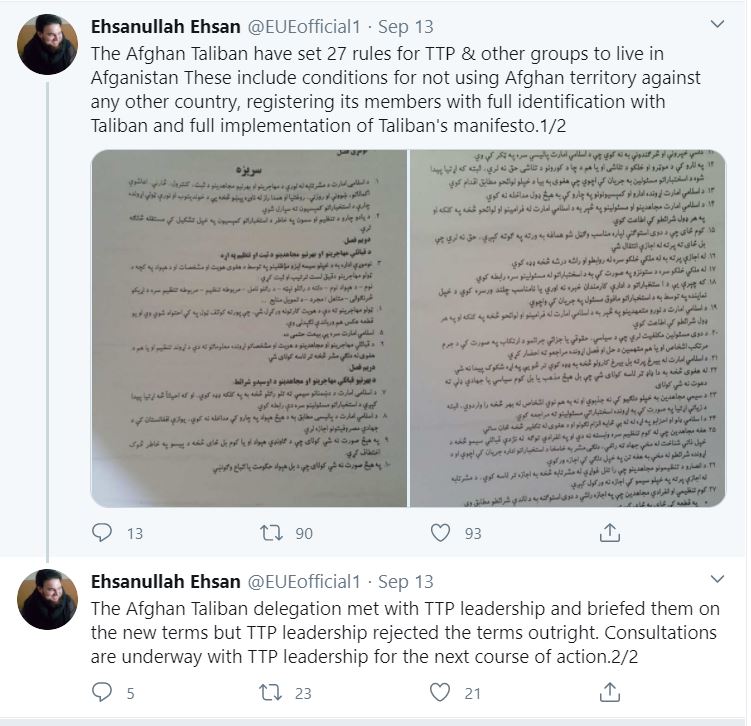 The terms and conditions came into the light, when the former TTP spokesperson Ehsan Ullah Ehsan shared a series of tweet narrated that the Afghan Taliban have set 27 rules for TTP and other groups to live in Afghanistan. The tweet with documents in attached narrated that among the terms include conditions for not using Afghan territory against any other country.

The documents claim that Taliban will registered their members with full identification with Afghan Taliban. Moreover, there will be full implementation of Taliban’s manifesto in the country. However, the group has rejected, which aims try to pose a new challenge to the Afghan Taliban which has so far succeeded in peace deal.

On September 13, the ex-spokesperson claim that TTP has rejected the terms set by Afghan Taliban narrated that the Tehreek-e-Taliban Pakistan (TTP) has rejected the new rules set up by the Afghan Taliban for groups living and functioning from Afghanistan. The ex-spokesperson of TTP shared that consultations are underway with TTP leadership for the next course of action.

The Pakistani officials have repeatedly accused Afghanistan of providing shelter to the TTP in Afghan border areas. The claim has been rejected by Afghan officials, who often blame the Pakistani military of supporting the Afghan Taliban and providing them havens and sanctuaries

In 2010, the United States has designated the TTP a foreign terrorist organization. In recent development, the United Nations Security Council report in May 2020 estimated that the TTP has 500 fighters in Kunar and about 180 in Nangarhar while the total number of Pakistani nationals fighting with terrorist groups may be as high as 6,500 across Afghanistan

After the historic peace deal inked between the Afghan Taliban and the United states in June at Doha, Sohail Shaheen, who was the spokesperson of Afghan Taliban political office at the time talked to the media that “We are determined to not use Afghan land against anyone”

On question of the journalist worked for International media that Pakistan’s demand to stop the Pakistani Taliban in Afghanistan from attacking, the spokesperson of afghan Taliban political office, Sohail Shaheen answered that TTP, who fighting in Pakistan are not present in the areas which Afghan Taliban are controlling but they are in the administrated area which government of Afghanistan are managing. The Kabul administration should be asked, Shaheen elaborated.

On the other hand, the reconciliation efforts between the government and the Taliban are still underway in Afghanistan, Tehreek-e-Taliban Pakistan (TTP) has announced a reunification with Jamaat-ul-Ahrar (JuA) and Hizbul Ahrar — a move that experts warn could be the beginning of increasingly hostile activities against Pakistan

The TTP is a banned Pakistani militant organization that draws its ideological views from al-Qaida, was founded in 2007 in North Waziristan of Khyber Pakhtunkhwa province in Pakistan. With alleged bases in both Kunar and Nangarhar provinces in eastern Afghanistan, it has been able to sustain a militant presence along the border between Pakistan and Afghanistan

On talking to the Anees Ur Rehman, who is an afghan journalist having focus on Pakistan and Afghanistan issues said that the Afghan Taliban do not engage in attacks in Pakistan. Its efforts are focused on fighting Afghan and international troops in Afghanistan. He further explains that despite their differences, all of the Pakistani Taliban factions—even those that attack Pakistani interests—call the reclusive Afghan Taliban leader Mullah Omar their leader, or amir al-mu’minin, Rehman added.

The afghan journalist further elaborates that the Afghan Taliban’s perspective, despite their disapproval of Pakistani Taliban attacks inside Pakistan, they are hesitant to disown the TTP mainly because they need Pakistani Taliban support in the tribal regions to maintain their safe havens and sanctuaries, as well as tribesmen to fight in neighboring Afghanistan, Rehman shared.

He further through light on the relationship of TTP and Afghan Taliban speak that on the long-term interests as well as strategic expediencies are keeping both the Afghan and Pakistani Taliban—including the TTP—together despite having different approaches to the conflict in South Asia, Rehman concluded.

On the hand, the Tehreek-e-Taliban Pakistan (TTP), an umbrella movement of the Afghanistan-based Pakistani tribal militant groups, seems to be regrouping and reviving itself. In this regards expert claim that when stability is returning to Afghanistan with the help of Pakistan, an effort is being made to sabotage it