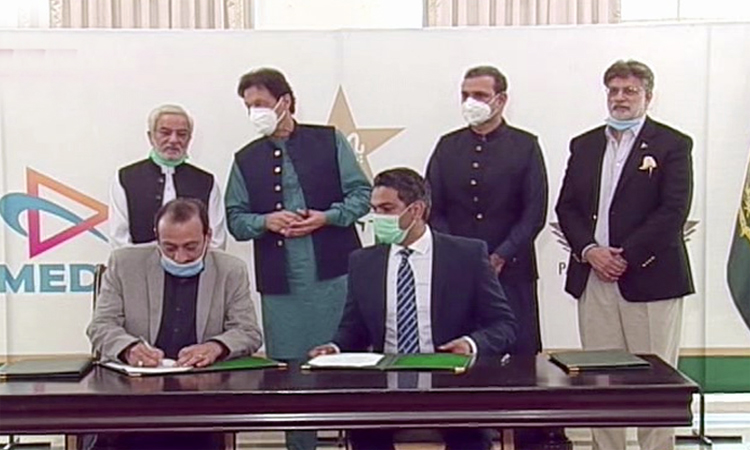 LAHORE: The Pakistan Cricket Board (PCB) has signed a three-year satellite broadcast deal with PTV Sports and a separate agreement to secure cable distribution with I-Media Communication Services. The agreements were signed on Wednesday in the presence of Prime Minister Imran Khan who is also patron of the PCB. The broadcast deal will be for the 2020-2023 cycle. The broadcasting arrangement is structured to provide for increasing revenues over the three-year cycle and the PCB expects to earn in excess of $200 million during this period. The deal will see PTV broadcast all Pakistan’s home bilateral commitments as well as all domestic cricket. The deal ends a brief period of uncertainty after the PCB’s five-year deal with Ten Sports ended earlier this year. In a shrinking broadcast market globally and an under-developed one locally, further hit by the Covid-19 pandemic, the PCB had recognised any new deal would be a departure from the norm of this century, and in some ways this is.

It marks a return of sorts for the broadcaster that played such a vital role in the growth of the sport with its broadcasts from the 1970s right up to the late 1990s. From the 2000s, until earlier this year, the PCB’s broadcast rights resided mainly with Ten Sports; PTV broadcast home games as part of a joint consortium with Ten Sports from 2012 until December last year. And while more specific details of the deal have not been made public it appears to be a departure from regular broadcast deals in which broadcaster and board agree on a total value the home board’s fixtures are worth and then the broadcaster pays that amount out over the course of the deal.

“The broadcasting arrangement is structured to provide for increasing revenues over the term of the cycle and PCB expects to earn in excess of $200 million over the three year term,” the board said in a press release. Those earnings will be made up of advertising revenue but also, critically and for the first time in Pakistan, distribution revenue from cable operators – the equivalent of revenues that broadcasters make from subscriptions. That revenue – so important in countries such as England, Australia and, increasingly, India has been all but non-existent in Pakistan due to the nature of the industry. But given PTV’s reach as the state broadcaster, that subscription revenue could potentially amount to a substantial figure. Thus, signatories to the agreement include the Cable Association of Pakistan. “The supporting cable distribution agreement, unlike in the past, seeks to ensure that the broadcast content of PCB cricket is not redistributed without proper authorization which was one of the reasons for greatly diminishing the value of PCB content,” the release said.

Ultimately, it is believed, PCB and PTV will share revenues, the board taking a 57.5% share and the broadcaster 42.5%. Unusually the PCB did not put the process up for open bidding, as they have done consistently this century. Instead it chose to exercise the right to opt for direct contracting, under Public Procurement Regulatory Authority rules – the interpretation being that the PCB isn’t selling but working on a partnership with the national broadcaster. PTV Sports is one of only a handful of sports broadcasters in Pakistan, although its production capacity has long been in need of an uprgade. But that upgrade is precisely what the PCB has seemed to secure out of this deal, which will include the PCB extending help in training PTV’s production units so that they are capable of producing international standard content.

The PCB is also in talks to convert PTV Sports from SD to HD broadcast format. “It also seeks to create the impetus to expedite the conversion of analogue cable to digital cable in Pakistan which will go a long way in ensuring all cricket fans receive the highest quality and maximum quantity of cricket content on their television screens,” said the PCB. “Digital cable will allow cricket lovers to select from simultaneously played live matches and not miss any cricket match.”