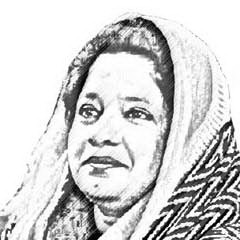 An Incident that traumatized the nation

Whole nation, especially women are in agony for what happened in motorway incident. It makes me sick to imagine how helpless a mother of three would have felt against the vultures. This whole episode of inhuman behavior towards a woman and her children has inflicted immense pain on not only the victims, but also to the whole nation.

What type of mentally sick people could do such thing to anyone. Its really alarming to notice that every day we happen to hear a tale of human monsters tearing apart their fellow beings. There are no exceptions. Babies, children, girls, boys, women, persons with special needs, and the list goes on. In fact, any one who is perceived as weaker or unable to protect him/herself, is vulnerable.

Every sensible person can imagine what dreadful experience it would have been for the young children. Yet our worthy CCPO thought it more appropriate to enlighten the people on how few steps taken by the victim might have contributed to what happened. According to him, he is a straightforward person, therefore deemed it necessary to warn other countrymen that if they let females travel like this in future, consequences might be like the motorway incident.

According to the report of Sahil, an NGO, approximately 8 children are abused daily in our Pak land. As for females, in 2019 Pakistan ranked 164 out of 167 countries on peace and safety for women

Dear Pakistanis if you don’t protect your selves. You have the sole responsibility for any adverse consequences. Our law enforcing agencies are playing their active role by warning us. It was really disappointing to see some of the political leaders form governing party, trying to defend the statement of capital city police officer.

The cases of child and female abuse have been at rise in previous years. According to the report of Sahil, an NGO, approximately 8 children are abused daily in our Pak land. As for females, in 2019 Pakistan ranked 164 out of 167 countries on peace and safety for women. We were only better than Afghanistan, Yamen and Syria. We can argue about the authenticity and neutrality of reporting mechanisms for such indexes. But yet, safety situation is gradually becoming more deplorable. For common people the reported cases on media are a simple yet very visible source of information in this regard. And increased cases been reported on media is constantly increasing stress in the viewers.

I happen to know through very reliable sources that few media houses are constantly trying to contact the complainant to dig details out of the case. Its’ understandable that media wants to get a more in-depth story. But is it ethical to problem in cases like this one? It’s not always about ratings or popularity, it’s also about respecting the basic rights and feelings of others. The effected family has already gone through much, we should try to respect their right to confidentiality and privacy.

Such hurtful events not affect the victims; its effects are far reaching. There are many layers of trauma associated with such brutality. First level of trauma is for the victims of such maltreatment and their families. In Lahore motorway incident, it’s not difficult to imagine the immense psychological and physical pain inflicted upon the mother and her kids. Their physical wounds will gradually heal, but how will those little angles forget what they witnessed. Will their psychological balance ever reinstate? Even if they gradually learn to cope with the post-traumatic stress, their mental scares will haunt them throughout their lives.

According to Stanford Children, after experiencing a stressful incident, children can display many symptoms associated with post traumatic stress disorder. They can have nightmares and flashbacks of that distressing event. They can become avoidant of social gatherings, making friends or forming relationships with others. It can shackle their trust on humanity and ingrain a constant mistrust towards others. It can hamper their concentration and motivation. They require a constant support of family and professionals to come out of this abyss of despair and hopelessness.

Mother is the most powerful source of healing for children. But if she is the one being crushed and broken in the trauma? No pen has the power to ink the amount of sorrow, grief, pain and mental trauma the family is going through. The criminal and sadist actions of two culprits will continue to shadow the happiness and mental wellbeing of this family for many years to come.

Another layer of psychological impact of such hideous events, is on the society at large. When mainstream and social media is flooded with such news, it’s not surprising that your very young children ask probing questions about the terms being repeated used. Even if they do not fully understand the seriousness of the situation, yet they do understand that people, females and kids are being hurt by some criminal minded people.

Last night I was warned by my both kids that I should not go for an official meeting in any other city, unless I can comeback in day light. My children are too young to understand what actually happened, but they didgather that a mother and her kids were beaten up by robbers. Some of my colleagues and family friends also shared the prevailing feelings of insecurity and fear of unknown.

It’s very important that government takes an empathetic and positive stance on the incident. Its up to the chief executive to establish the writ of law. Psychological safety and mental wellbeing of our children is at stake. PM should give an assurance to the nation that we are in the hands of a responsible government.