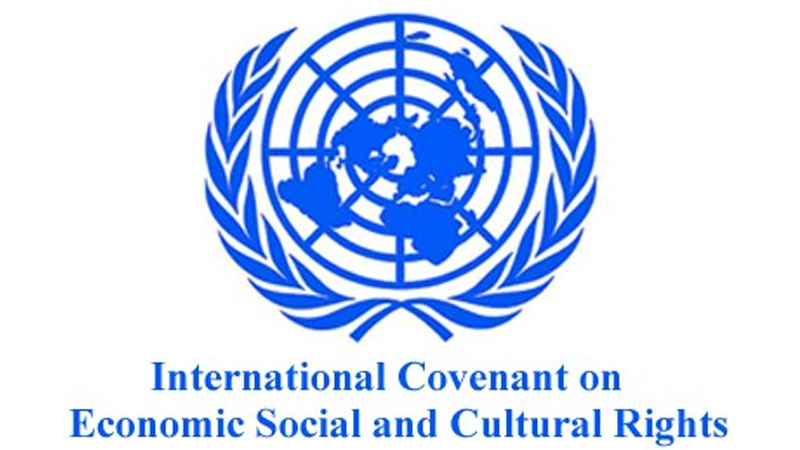 International law regime has been criticized for promoting a hegemonic order around the world with minimal effort to eliminate social inequalities. Scholars have argued that international regulatory bodies have tried to promulgate Westphalian concepts of human rights in the third world countries. Despite many International Human Rights laws, nothing substantial has been seen to promote social and economic rights in the third world. Article 2(1) of the International Covenant on Economic, Social and Cultural Rights (ICESCR) makes it obligatory upon State Parties to take steps both individually and through international assistance in order to progressively secure all of the rights recognized in the Covenant. Apart from the US, it is interesting to see that many developed countries which have ratified ICESCR, grant international aid to third world countries along the lines of benevolence. Despite the fact that the language of Article 2(1) explicitly obligates states to provide economic and technical aid and binds them with the responsibility to assist poorer states.

Samuel Moyn, a law and history professor at Yale, argues that US has always been keen on ensuring civil and political rights, and propagates a free market libertarian agenda for the world whereas neglects social and economic rights. Despite the fact that many American administrations have tried to show their commitment to social and economic rights and to eliminate global inequalities, those commitments never really crystalized into reality. Eminent legal scholar B.S. Chimni validates Moyn’s analysis by arguing that international law has been used as a key instrument to extend the rule of private property to world economy and these standards have been regulated through International regulatory bodies like the Bretton Woods institutions.

The Bretton Woods institutions have facilitated global hegemony of capitalist powers by the process of neo-colonialization of the developing countries. US is the biggest donor of the World Bank and the IMF. US being the founder and biggest donor to the IMF holds 16 percent of it’s votes, which is the largest percentage than any other donor state. In the case of IMF, the decision-making process is then based on a system of weighted voting which excludes its principal users, the third world, from a say in policy-making and hence reinforces the libertarian free market agenda. This leaves the developing countries with no voice in the loan agreements. Then, because of their poor status they have no other option than to accept to those deals contingent on ensuring civil and political rights in their respective country.

When granting loans to third world countries, Bretton Woods institutions like the IMF impose stringent conditions in an attempt to ensure certain “inalienable rights”. However, the conditions are more focused towards ensuring civil and political liberties than social and economic rights. A good example to validate this point is the case of Pakistan. The 6-Billion-dollar loan package announced by IMF for Pakistan in July 2019 shows that IMF ambitions are more concerned with free market economy rather than eliminating social economic inequalities. IMF conditioned in the July 2019 package that instead of the State Bank supporting the Pakistani currency rate, it should be the market that decides the currency rate. Another condition of the package was that Pakistan has to increase taxation in order to repay external debt. This would have adverse impacts on less-privileged groups because this would inevitably result in inflation in the country. Consequently, it would enhance the divide between the upper and lower classes and would create further disparity in the country. Furthermore, the loan package was aimed at correcting the “structural imbalances” in the country, according to the IMF. The structural imbalances that IMF aims to rectify would help free market economy in the country, however would have little to no impact in ensuring sustainability for the poor and underprivileged. This does not mean that civil and political rights are not crucial for human development, however, social and economic rights are also Human Rights and developing states are in dire need of such socio-economic support to improve their “structural imbalances”.

Even though social and economic rights are enshrined in various international law treaties and covenants, the widespread prevalence of poverty, disease, lack of education and poor health infrastructure in the developing world acknowledges our common vulnerability and needs which are still unmet today. It is a sad indictment of our political process that politicians have been able to fend off attempts for so long, to give them a real status and nevertheless an equal status to socio economic rights. The socio-political circumstances of the developing countries are different than the developed states. What works in the US is not entirely bound to work in the developing countries. Civil and political rights facilitated the growth of civil society in the US, however the developing world cannot prosper solely on the basis of these rights. They require international aid for the enforcement of social and economic rights. The US and other global powers must take into account the different circumstances that need to be recognized to formulate an effective policy for sustainability and growth of the third world. Pankaj Mishra encapsulates this by saying that ‘we live today in a vast, homogeneous world market, in which human beings are programmed to maximize their self-interest and aspire to the same things, regardless of their difference of cultural background and individual temperament’.

The writer is a lawyer based in Lahore.