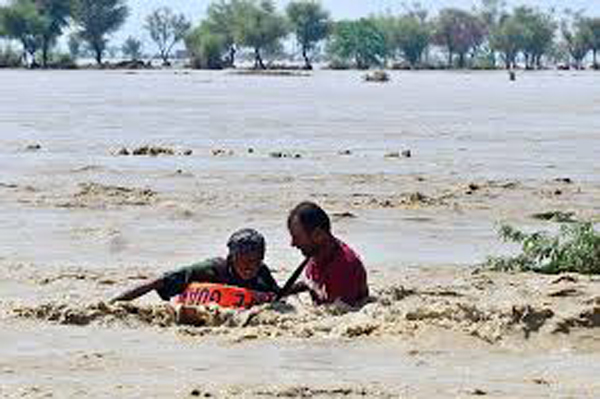 The recent floods and heavy rains have massively affected the area of Kachho arid zone from Qamber Shahdakot to Dadu District. Specially, the area of Kachho in the boundaries of Taluka Johi, Dadu District has been completely sunk into flood due to the over flow of mighty rainy river Gaaj, Nai Nalli, Nai Kukrani, Nai Khandhani, Nai Angee, Nai Naig and other hill torrents flowing from Kirthar Range. Mostly, the villages in UCs of Taluka Johi from Torr to Tando Rahim Khan are badly affected by the heay flood in Kachho. More than four people have lost their lives during flood. Livestock of people have flown in recent floods as well. All the crumbled houses have become the heap of mud. People are glancing at help under open sky.

On other hand, the heay rains and floods have damaged the historical and archaeological sites of Kachho in vicinity of Johi Taluka of Dadu District. The sites of Indus Valley Civilization and Chalcilithic period at Wahi Pandhi alias Kotero Daro, Ali Murad Shahani Daro, Gazi Shah Daro alias Marikhar Daro and Pir Lakhoi are surrounded by flood water which are under threat. Renowned archaeologist and historian professor Dr Aziz Kingrani said that Ghazi Shah Mound is 6000 years old archaeological site of Sindh, Pakistan which needs protection from time to time flood threats. N. G Majumdar has explored the signs of Mohenjo Daro civilization from Ghazi Shah Mound, Ali Murad, Wahi Pandhi. Site of Pir Lakho or Lakhio had been considered as second station of Mohenjo Daro by Majumdar, Kingrani added.

As well as the royal necropolis of Mir Allahyar Khan Talpur, Muridani Jamali graveyard, graveyard of Haji Khan Laghari alias Qalanderani Laghari cemetery, graveyard of Araro, Graveyard of Admani Leghari, graveyard of Shadan, Wachho patt and other cemeteries are at high risk due to heavy rains and flood in Kachho. The walls of all above mentioned tombs are adorned with amazing fresco paintings. According to research scholar and author professor Kingrani, the fresco paintings on walls of the tombs depict the social, cultural and daily life of Kachho including Sindh. The famous love legends like Sassi Punnu, Laila Majnu, Suhni Mehar are also frescoed on the walls of tombs of the graveyards. If, the tombs will be collapsed, it will be the greatest loss of heritage of Sindh, he said. The paintings done on outer and inner walls of the tombs are amazing instance of Islamic, Persian, Mughal,Rajisthani and Sindhian art of painting., Dr Kingrani added.

Kingrani urged that The government of Sindh should give proper relief to affected people including pay a heed for repairing, conservation and restoration of historical and archaeological heritages.

” All archeological sites in Kachho belt were damaged seriously due to heavy rain of Kheer Thar Mountains and in Kachho” ” said director general archeological , culture, tourism and antiquity departments government of Sindh Manzoor Kanasro”. ” As soon as water will be reduced , survey will be conducted and repair and restoration will be started” ” said Manzoor Kanasro”.

” All damaged historical and archeological sites will be repaired and restored” ” said Manzoor Kanasro”.