Taking the war to the sea 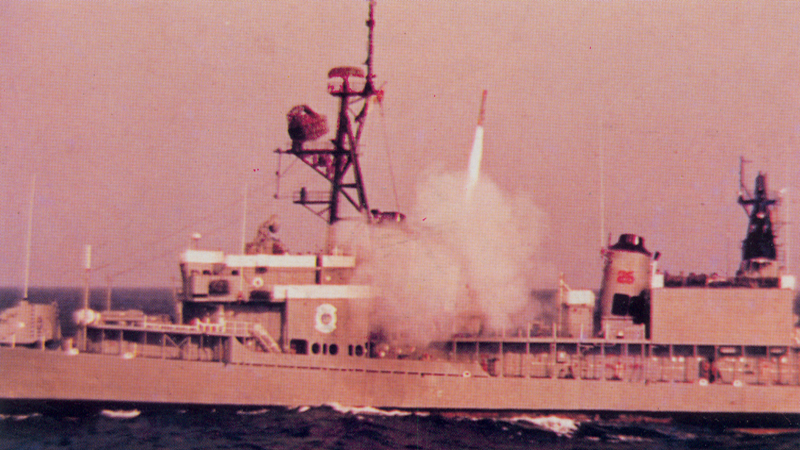 The dawn of 6 September 1965, was a day like any other dawn. As the sun rose over the horizon, however, it ushered in, along with the ever-brightening rays of the sun, the steeds of war. Parents, unaware of the events unfolding at the border, had packed their children off to school but had to hastily rush to retrieve them when they heard the emotionally- charged somber announcement on radio about the outbreak of hostilities. The composed voice of President Ayub Khan, reassuring and determined, kept roaring over the available audio-visual spectrum, vowing defiance and demanding sacrifices. People responded to his call with gusto, donating whatever they could to the war effort.

Gathered together in the living room of their houses amidst the deepening gloom, talking in hushed tones, a solitary lamp dimly glowing, windows blacked out, families could be forgiven for thinking that it was some act from a surreal play. Tales of valour kept their spirits up, faces aglow with pride. The thud thud of the artillery in the distance, the sight and sounds of jets winging overhead, the restrictions imposed on travel, the black-outs and curfews enforced at night, served as the only constant reminder of the humdrum of war and as a sort of reality check.

On that fateful day of 6 September, all operational Pakistan Navy warships, a cruiser, five destroyers, a frigate and a tanker, were already preparing to sail out for scheduled exercises at sea when the ominous news about the outbreak of hostilities was received at around 6:30 in the morning. Their departure was consequently hastened somewhat. Ever since the skirmish in the desolate plains of the Rann of Kutch the previous month, the ships were in an heightened state of readiness, remaining topped up with rations and ammunition. Regular tactical exercises had fine-tuned their state of preparedness.

The next day ie Sep 7, while engaged in defensive patrol for seaward defence of the coast, the ships received an urgent message from Naval Headquarters directing them to proceed due south at maximum available speed so as to be in position around 120 miles west of Dwarka by six in the evening. The ships topped up their stock of fuel while en route at sea and then as per the instructions received, headed towards Dwarka, where its Radar Station had been assigned as their primary target for bombardment. The Officer in Tactical Command onboard PNS Babur quickly prepared the firing instructions and got them distributed to the other ships through heaving line transfer while underway.

The group of seven PN warships reached their firing position by midnight as scheduled. They had between them twenty-seven guns: the solitary cruiser Babur had 5.25? turrets, the two Battle class destroyers, PNS Khaibar and Badr, had 4.5? turrets, the three Chukker class destroyers had 4.5? mountings and the lone frigate Tippu Sultan had a 4? mounting. It was a pitch dark night, made more so by the complete blackout being observed by the hapless city of Dwarka. The firing had therefore to be conducted by radar. The ship’s altered course to North West to enable all the guns to be simultaneously fired. Once the executive order to fire was given, the ship’s expended their allotted quota of 50 rounds each within a matter of minutes.

Talwar, an Indian Naval frigate, undergoing minor repairs to its condensers in nearby Okha, was later castigated by many senior Indian naval officers for not going after the retreating ships. The ship was however tasked the next day to proceed to Dwarka for damage assessment, which was found to be significant: the naval radar facility was gutted, killing two officers and thirteen sailors, the naval air station’s runway was rendered ineffective and a cement factory also hit. Losses aside, a naval strike so early in the war managed to catch the Indian Navy by surprise and at the end of the day, left it feeling humiliated. Though the entire operation was pulled off rather effortlessly, it certainly wasn’t without its share of risks. The PN ships couldn’t have known that out of the 23 major IN warships, 10 were under refit in Bombay, including a cruiser, Delhi, and an aircraft carrier Vikrant, whose docking had been delayed because of the Rann of Kutch crisis. Most of the operational units had been sent to the Bay of Bengal and couldn’t reach back to Bombay before 9 Sep, after being recalled.

The major edge the Pakistan Navy possessed came in the shape of a US-origin conventional submarine, PNS Ghazi, which happened to be the only subsurface platform being operated by any of the regional navies and as such was an unknown entity. In order to be better prepared to counter this threat, the Indian Navy had sought the services of a British submarine for live exercises in the Bay of Bengal. Both governments having disallowed the use of commerce warfare, the Pakistan Navy had tasked PNS Ghazi to go in for large naval vessels like an Aircraft Carrier, cruisers and an oil tanker. PNS Ghazi had to unfortunately come back to Karachi for three days till 14 Sep for effecting repairs and somehow couldn’t cross paths with the sort of targets it was looking for. On 22 Sep, just before the ceasefire was due to take effect, the submarine managed to score two torpedo hits on an IN frigate it believed was the INS Brahmaputra. From an Indian naval perspective, the submarine could have been lurking anywhere off its west coast and thus injected a fear factor into the equation.

The 1965 conflagration will continue to be remembered for a number of things: the self-restraint imposed by both sides by not deliberately targeting civilians, the bravery on display by the Pakistani military in the defence of its motherland, spirited backing extended by the civilian populace and the unwavering support given by our regional friends.