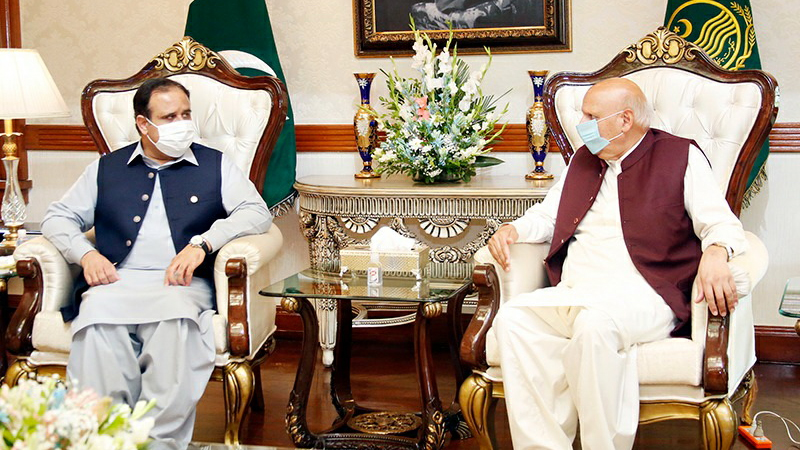 Governor Ch Sarwar congratulated the chief minister for completion of two years of the Punjab government and appreciated the provincial government’s performance. He paid tributes to Usman Buzdar for moving forward development projects despite financial difficulties. The CM praised the efforts of Governor Punjab Ch. Muhammad Sarwar to express solidarity with the citizens by visiting Karachi. The PTI government is standing with the citizens of Karachi in this hour of trial. The Punjab government has taken solid steps to fulfil the promises made with the people and taxes have been abolished or their ratio has been decreased keeping in view the difficulties of the citizens, he added. The CM stated that local government funds have been restored and financial transparency and merit in administrative matters is the agenda of the government. Honesty, transparency, merit and truthfulness are the hallmarks of the Punjab government, he added. The era of political jugglery is over and the government takes practical steps for public service, he further said. The CM regretted that opposition made a futile attempt of political point-scoring on Karachi issue and asserted that Prime Minister Imran Khan is fully committed to resolving the problems of Karachi.

Governor Punjab Ch. Sarwar stated that he visited Karachi to express solidarity with the rain-affected people adding that all our sympathies are with the affectees. Opposition only did lip-service on the issue of rains in Karachi and, instead of engaging in negative politics, it should have come forward to help the affectees of Karachi. The PTI government will heal the wounds of Karachi under the leadership of Prime Minister Imran Khan. The universal coverage of Sehat Insaf Card is a historic decision of the PTI government. The PTI is promoting development and transparency in Punjab and its two-year performance is encouraging, he further stated.

Member National Assembly Rukhsana Naveed called on Chief Minister Punjab Sardar Usman Buzdar at his office and felicitated him over the successful completion of two years of public service. You have worked hard to provide relief to the masses and credit of eliminating one-man show culture goes to you, she added. Your doors are open to everyone and decisions are made in the public interest. Similarly, you have accelerated the journey of public service without caring for the spate of criticism, she further said.

Usman Buzdar maintained that two years of PTI rule is filled with public service and every sector is being developed on modern lines. He pointed out that rates of essential items in Punjab are the minimum as compared to other provinces. Punjab is the only province where a 20-kg flour bag is available at Rs.860. I personally monitor relief providing steps and price control authority is being established to permanently eradicate the price hike, he added. The welfare of the impecunious strata is the core mission of the government. Similarly, creating ease is another obligation, he added. The CM disclosed that work has been started on urban forestation. Public interest has always been given importance while serving the masses. Our inner self is transparent and clean and my team is victorious before the court of the people. Punjab is leading other federating units in terms of merit, transparency and good governance, he further said.

Chief Minister Punjab Usman Buzdar has expressed a deep sense of sorrow over the death of Ch. Faqir Muhammad Goraya, father of former LPC president & columnist Mohsin Goraya. In a message, the CM prayed that may Allah Almighty rest the departed soul in eternal peace and grant courage to the bereaved family to bear the loss with fortitude. Chief Minister Punjab Sardar Usman Buzdar has thanked the people for their cooperation during coronavirus adding that situation in Punjab is better than other provinces.