* Haseena Moin stated, 'For me, giving my script to someone is just like giving your child to someone else' 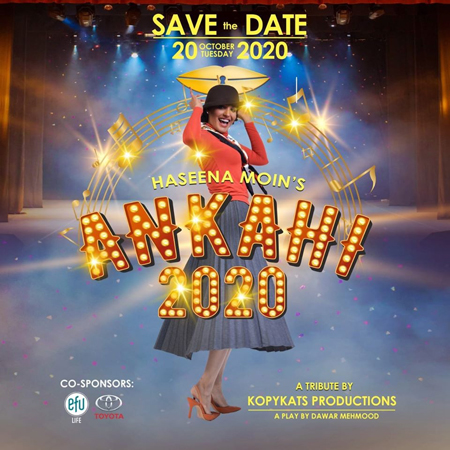 The idea of revisiting Pakistani popular dramas has worked big time. The theatre adaptation of Anwar Maqsood’s “Aagan Tehra” had drawn audience to the theatre. Well, judging by the amazing response, it is safe to say that the audience enjoys watching a story they loved told differently. Theatre director Dawar Mehmood of KopyKats Productions brings Haseena Moin’s classic play ‘Ankahi’ to the stage.

Titled as ‘Ankahi 2020’ the play is Mehmood’s tribute to the veteran writer. It stars Amna Ilyas in the leading role of ‘Sana Murad’ originally played by Shehnaz Sheikh. The play got postponed due to the Coronavirus outbreak; it will now premiere on October 20, 2020.

Haseena Moin stated, “For me, giving my script to someone is just like giving your child to someone else. The revival of theater in Pakistan was the main reason to approve Ankahi’s theatrical adaption. This play has been my favorite and I won’t let it get ruined; you can be sure of that. I have been very particular about my work and other decision related to it. The script is very strong and would surely provide wholesome entertainment. I want to give out a message to the current generation, especially to women and children that we need love in our lives not hate. Be it, loving our self’s, our country, or the people around us.”

According to Dawar Mehmood, “It is not Ankahi. It’s Ankahi 2020; a tribute from Kopykats to Haseena Moin. The basic plot is the same, it’s a love triangle; the original 22 episodes have been reduced to 90 minutes. We have changed the packaging and its era ie from 1982 to 2020 making it relevant for this generation. We have eleven actors on board along-with a crew of around two hundred people that includes extras and background dancers. Wahab Shah is the choreographer and music is given by Abbas Ali Khan. My body of work previously focused on comedy and serious subjects, so this is different for me as I haven’t attempted romance and music. I hope Ankahi fans won’t be disappointed.”

According to Dawar Mehmood, ‘It is not Ankahi. It’s Ankahi 2020; a tribute from Kopykats to Haseena Moin. The basic plot is the same, it’s a love triangle; the original 22 episodes have been reduced to 90 minutes’

Sharing her excitement Amna Ilyas shared: “This is my first theatre play, it’s an entirely new world for me. I am very happy to be a part of the theatre family; I am nervous yet excited too. I will try my best to do justice to Shahnaz Sheikh’s brilliance. My character is set in 2020, we plan to bring in the small nuances of today’s world into it. It’s a mixed plate of songs, fights, comedy, dance, and emotions. During the previous press conference before COVID-19, I was a bit nervous that what if this doesn’t go right? But with time and extensive rehearsals you get an idea about the result. I want to say this one shouldn’t be missed; I am very confident about Ankahi 2020; people will love it and it will turn out to be a massive hit.”

Sajid Hasan was all praise for Haseena Moin: I am a virtual creation of Haseena Moin’s ‘Dhoop Kinaray’ and have witnessed the power of her writing in that era. I am happy to be on board and grateful to Haseena appa that she gave me the permission and liberty to contribute in adapting the script with Saqib Sameer. The signature element of her story i.e. the basic core and struggles of ‘Sana Murad’ are the same. I request people not to draw any comparison from the original and promote theatre. The theatre is challenging and has its demands therefore I have given my inputs to do it in the best possible way. Also, I would like to mention the special efforts and contributions of Ahmad Shah in taking every possible step to revive theatre in Pakistan.”

‘Ankahi’ was a massive success back in 1982, well remembered for its witty dialogues, humor, and superb performances. Will a story that worked decades back would recreate the same magic again with the millennial audience? Let’s see how it fares! ‘Ankahi 2020’ premiers on 20th October, 2020 at the Arts Council Karachi in full compliance with the COVID-19 SOP’s as directed by the government.