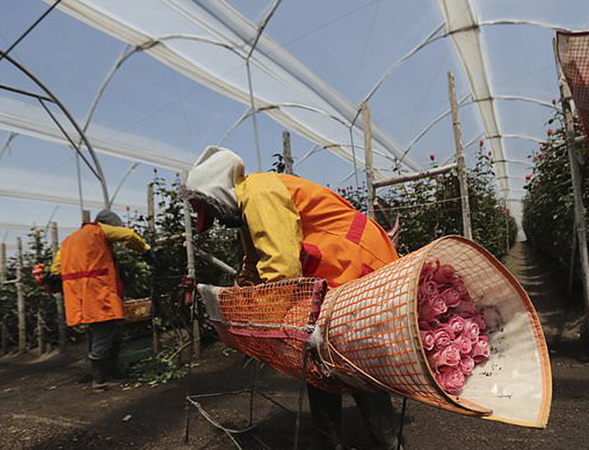 Flower growers in Ecuador are trimming back their fields, cutting plants at the root and in some cases tossing out piles of colorful blooms entirely as the pandemic delivers a devastating blow to one of the nation´s biggest export industries.

Demand for the small South American country´s prized flowers has struggled to rebound after plummeting earlier this year – and remains at just 70% the normal rate, according to the Ecuadorian Flower Growers and Exporters Association.

“It´s a critical situation,” said Alejandro Martínez, executive president of the association. “The worst blow the Ecuadorian flower industry has ever experienced.”

The setback follows a turbulent 2019 marked by nearly two weeks of deadly social unrest over the elimination of a fuel subsidy that shut down much of the country and led to $45 million in losses for the flower sector.

Ecuador is the world´s biggest producer of roses and prized for its favorable equatorial climate and optimal soil conditions that allow for a bevy of floral varieties. Cut flowers are the nation´s fourth largest non-petroleum export and tallied $400 million in sales last year, according to the Central Bank.

More than half of all revenue is generated during two big holidays: Valentine´s Day and Mother´s Day. Both dates coincided with the onset of lockdowns in various parts of the world that sent sales sliding. Ecuador´s flower growers sold just 40% of what they do typically, according to the flower growers association.

And while neighboring Colombia – the world´s second-largest flower exporter – has managed to recover thanks to steady US and European supermarket sales, Ecuador hasn´t experienced the same good fortune. Its flower sales are highly dependent on large-scale events like weddings and conventions that haven´t yet sprung back.

In response, plantations in Ecuador are taking drastic measures. One large grower, Klaus Grestzer of Ecuagarden, estimates most businesses have thrown out over 50% of their flowers since March. Overall, growing fields have been trimmed back about 17%, according to Martinez. Some companies are trimming flowers to the root so that they don´t blossom for 18 months.

“It seems we are going to get stuck at 70% exportation to the 120 usual destinations,” he said.

Colombia, by contrast, is back up to about 90% of normal export levels, according to the Colombian Association of Flower Exporters. Like Ecuador, the nation saw a severe decline in March and April, months when growers were forced to destroy tons of flowers and turn them into compost. But around Mother´s Day, demand crawled back up and companies went back to work with new biosecurity protocols.