The exceptional spell of rain in Karachi has wreaked mess in the metropolitan city which could affect the country’s exports in August due to the delay in export consignments. 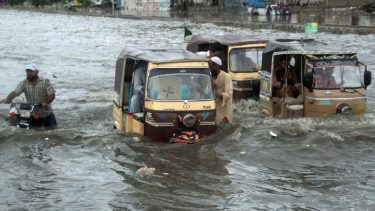 Karachi has received record-breaking rains in the current month so far and after Tuesday’s unprecedented spell, now 345 millimeters of rain was recorded at the PAF Faisal Base, while previously 298.4mm of rain was recorded in 1984, adding on that the Masroor Base received 271mm and Karachi Airport got 241mm rain this year, which is 300 to 400 times more than average rainfall in Karachi in August.

“It appears that because of heavy rains, particularly in Karachi, our export consignments are being delayed, hence, exports may be affected in August. Any difficulties faced by the exporters may please be brought to the notice of MOC (Ministry of Commerce),” tweeted Adviser to Prime Minister on Commerce and Investment Abdul Razak Dawood on Wednesday.

Heavy rains might have impacted operations at the Karachi Port, causing a delay in shipments, said Arif Habib Limited (AHL) Head of Research Tahir Abbas. “Unavailability of labour and workers due to heavy showers can be a reason for the operational delay,” he added.

In July 2020, the current account posted a surplus of $424 million, 1.9% of gross domestic product (GDP), against a deficit of $613 million, or 2.8% of GDP, in the same month last year, according to the Finance Division Economic Adviser’s Wing Monthly Economic Update and Outlook August 2020.

Besides, the State Bank of Pakistan (SBP) has announced additional support worth Rs190 billion for exporters and investors in export-oriented sectors to offset the impact of decrease in global export opportunities due to the pandemic, according to the report.

The development comes after heavy rain began agonizing the city early Tuesday morning and continued till evening as storm drains and dozens of other choked drains overflowed, flooding almost all the main roads and streets in the city, preventing people from reaching workplaces, drowning parked cars and motorcycles, and flooding houses with sewage-mixed rainwater in low-lying areas of Karachi.