I find it a great pleasure in writing this review after having worked in the resettlement and development field for over two decades in countries in Asia and Africa. The book, edited by Michael M Cernea and Julie K Maldonado, is titled Changing the Prevailing Paradigm of Displacement and Resettlement: Risks, Impoverishment, Legacies, Solutions (Routledge Reprint Special Indian Edition 2019, Manohar Publishers and Distributors, New Delhi. 334 pp. Special Indian price Rs1095. Paperback ISBN 978-0-367-24740-9). It was first published in 2018. Thanks to the efforts by the editors, this Special Indian edition published in New Delhi is for sale at a significantly lower price in the Asian market – particularly in India, Bangladesh, Pakistan, Nepal, Bhutan, and Sri Lanka – where over a million people are displaced annually due to infrastructure development projects, with India taking the larger share of the displacement portfolio. 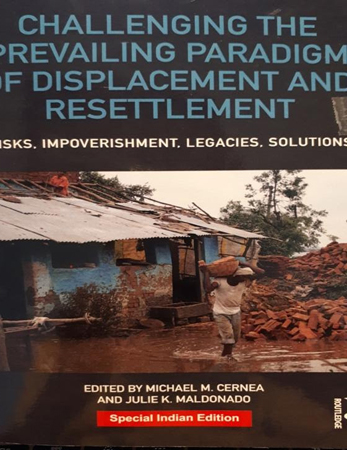 Development-caused forced displacement and resettlement (DFDR) remains a critical problem on the international development agenda due to the poor to very mediocre management of displacement risks, chronic under-compensation, risks to human rights, and other adverse impacts leading to impoverishment of the affected communities. International financial institutions such as the World Bank and the regional development banks, who promoted for the past 40 years or so various policy instruments on resettlement/social safeguards intended to minimize project-induced displacement and impoverishment have had hard times to date establishing any striking evidence of restoration and improvements in the lives of resettled communities, partly because resettlement ultimately is a borrowers’ responsibility who typically have very little political will, very limited and/or weak country-level legal frameworks and limited capacity and experience in resettlement management. As a result, resettlement outcomes in the past largely meant impoverishment of people affected by development projects.

The book is well structured, and the convincing articulation of the details based on research and analysis is striking

This edited book is a welcome study of resettlement experiences and outcomes with robust analysis that addresses the critical processes of DFDR in comparative perspectives covering a wide range of countries in Asia, Africa, Australia, Europe and the Americas. The Introduction by the editors narrates the evolution of resettlement and social safeguard policy measures at various stages within the World Bank, which was led by Michael Cernea himself from mid-1970 to 2010. However, the adoption of new Environmental and Social Framework in 2017 and its various “standards” that are “non-binding for Bank staff” is viewed as a “retreat” from previous policies, and in doing so, the Bank seem to have largely retracted from its responsibility and ethics of development.

The introduction is extremely rich in contents with insights and detailed analysis, including use of research-based knowledge in policy development, reviews and improvements in policies and operations over the years (1980-2001), and challenges faced by the World Bank in policy implementation, particularly the failures to restore and improve livelihoods, coupled with weak capacity of the borrowers in resettlement management, and the legacy issues. The book then provides a prescription for “resettlement with development” (RwD) as a new paradigm in contrast to the prevailing “resettlement with impoverishment” experienced in past projects.

The various articles in the book are presented in two separate but interlinked Parts. Part I contains five case studies (Chapters 2 through 6) that analyze the intricacies of resettlement planning and management in hydropower in China (by Chen Shaojun), characteristics of forced displacement in mining industries (by John Owen and Deanna Kemp), distinct policy gaps in urban displacement and reconstruction of livelihoods (by Dolores Koenig), boomtown risks, sexual exploitation, teenage pregnancy and urban impoverishment caused by road development project in Uganda (by Elana Berger and Moses Ntenga), and the dilemmas confronting conservation and environmental protection in India (by Asmita Kabra). Asmita Kabra describes the worldwide scope of conservation displacement and uses the Kuno sanctuary case in India to highlight the socio-cultural and economic impacts of inadequate post-displacement rehabilitation.

The eight chapters (Chapters 7-14) in Part II focus on new laws and legal framework, ethics and accountability to improve upon existing practices. The chapters collectively present “lessoned learned” from various case studies – for instance, Chapters 7 and 8 (by Shi Guoqing and Duan Yuefang) that describe continued improvement of Chinese resettlement laws over the last 30-year period with a particular focus on livelihoods and income support, marking a significant shift from one of impoverishment to “resettlement with development.” In similar fashion, Chapter 9 (by Natalie Bugalski, Mark Grimsditch, and David Pred), Chapter 10 (by Carmen Albertos) and Chapter 11 (by Valerie Hansch and Miriam Saage-Maaf), respectively deal with rights of the project-affected communities and holding the government accountable to unjustified risks in Cambodia to obligations for handling post-project legacy solutions in the case of the indigenous people affected by dam project in Guatemala, and legal proceedings in Germany against German-based Lahmeyer International engineering company for inflicting forced-displacement risks and impoverishment and human rights violations accruing from large infrastructure projects in Sudan.

Of the remaining three chapters, Chapter 12 (authored by Robin Bronen, Julie Maldonado, Elizabeth Marino, and Preston Hardison) examines the scope and complexity of climate-caused forced displacement and emphasizes the need for new legal frameworks for countries facing such disasters. In Chapter 13, Nicholas Tagliarino, based on his study of 50 countries in Asia, Africa and Latin America, demonstrates the significance of the presence or absence of legally binding country-systems for carrying out resettlement. Tagliarino argues that it is essential for countries to adopt legally binding national-level legislation to guarantee appropriate and effective resettlement and livelihood restoration for forcibly displaced populations. The last and final chapter (Chapter 14 by Jessica Evans) provides evidence of human rights abuse in World Bank-funded projects and called for “abuse-free” development and protection of the rights of those affected by its projects. In sum, the various chapters in the book analyze the mechanisms of deprivation and social, economic and cultural exclusion, and injustices with recommendations for a new resettlement paradigm.

The book is well structured, and the convincing articulation of the details based on research and analysis is striking. The contributing authors in the book are known for their research, scholarships and advocacy to promote justice and human rights for people affected by forced displacement, expropriation and resettlement. The book clearly demonstrates the challenges and limitations of the current approaches and practices, followed by discussions on the new paradigm of “resettlement with development,” calling out very explicitly for use of the new knowledge to bring about a transformational shift in the displacement-resettlement paradigm.

Finally, this cheaper paperback special Indian edition should attract a wide readership among scholars, policymakers, and experts/practitioners in the South Asia region. This critical work has the undeniable merit of bringing together a great wealth of experience, building on new insights on DFDR, and inviting all – more particularly policy makers, project managers, and experts/ practitioners – to consider the recommendations and proposals put forward in the book, act upon and carry forward this paradigm shift that the book seeks to promote in their own works and practices.