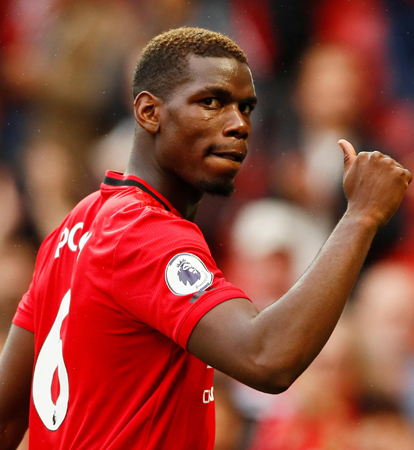 LONDON: Manchester United midfielder Paul Pogba will soon begin talks with the club over a new contract and will not be leaving in the current transfer window, his agent Mino Raiola has said. France international Pogba has frequently been linked with a move away from Old Trafford since rejoining United from Juventus in 2016, but formed a potent midfield partnership with January signing Bruno Fernandes in the closing months of the campaign. “We’re going to speak about a new contract soon,” Raiola told Sky Sports on Sunday. “Paul Pogba will stay at Manchester United. He is a key player. They have an important project and he’s 100% included. “United will not accept any bid this summer to sell Pogba.” Pogba, who has less than a year left on his United contract, spent a large part of last season out injured, making just eight appearances in all competitions before English soccer was suspended in mid-March due to the new coronavirus pandemic. He featured 14 times in all competitions when soccer resumed in June, helping United finish third in the Premier League to qualify for next season’s Champions League. United also reached the semi-finals of the Europa League, where they were beaten by eventual champions Sevilla.