On the trail of Balochitherium

Pakistan has a rich culture, history and heritage. It starts from pre-historic time and encompasses Mehrgarh, Indus and Gandhara Civilisations. The remarkable marks of civilisation are found in all provinces of the country; both in tangible and intangible shapes.

The province of Balochistan is not only considered as one of the earliest seats of civilisations but homes to prehistoric mammals as discovery from time to time revealed. In the words of renowned French palaeontologist, Mr Jean Loup Welcome, Balochistan has been the best bed and an evolutionary highway for ancient mammals. Nearly 30 million years ago, a very large and giant mammal roamed the province of Balochistan. Called Baluchitherium, it was estimated to be five meters high, nine meters long and weighed 20 tonnes. It was the largest mammal that ever lived on earth and belonged to the Paraceratherium family. The fossils of this strange and enigmatic creature were found from the hilly mountains of Dera Bugti district in Lund Chur area.

Sir Clive Foster Cooper, Director of Natural History Museum, London, and an eminent palaeontologist, discovered for the first time in 1910 the bones of the mammal having a very huge size. He named it Baluchithirium, which means the beast of Balochistan. This name was given in honour of the region where he found the bones. After his interesting discovery, there was no further research and investigation on this unique creature belonging to the Mammalia class till the 1990s.

After such a long pause of 80 years, a renowned Fench palaeontologist, Jean-Loup Welocmme, followed the path of Mr Clive. He embarked upon a journey that brought him to the hilly mountains in Balochistan to find more about this creature

After such a long pause of 80 years, a renowned Fench palaeontologist, Jean-Loup Welocmme, followed the path of Mr Clive. He embarked upon a journey that brought him to the hilly mountains in Balochistan to find more about this creature. The initiative of Welcomme was in collaboration with the Pakistan Museum of Natural History. This activity was carried out under a project “Mission Paleontologique Francaise au Balochistan.” 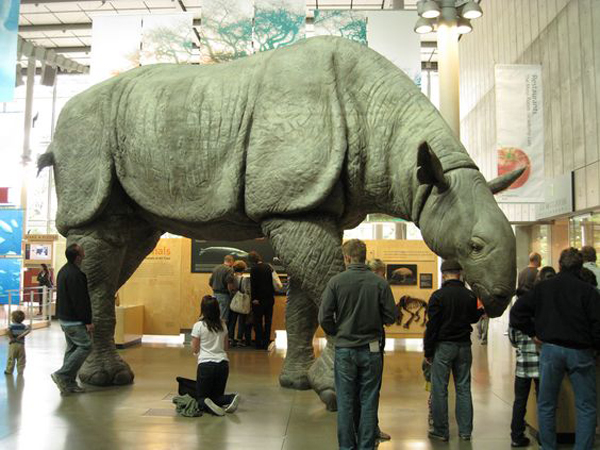 Professor Welcomme, along with his team members, started work in the early 1990s on this fossil bed. The task was immensely tough and challenging. While working in the area, they found many varieties of fossils. They finally succeeded in discovering certain fragmentary remains of this elephantine animal. The initial discovery was a finger of Baluchitherim. The excavation continued in search of remaining fossils and they were immensely successful in finding remains of this giant creature.

Besides, they discovered innumerable fossils scattered in that area. Fossils of a variety of other animals, such as crocodiles, turtles, fish, lemur and other mammals, were also found. More interestingly, the fossils of the 47-million-years-old walking whale were also discovered from that area. This was just a beginning and there was a lot more to be done. A thorough and meticulous examination was required to get an insight about this largest land mammal as yet known.

It was not an easy task to define features of any mammal that lived millions of years ago. Welcomme tasked his team to work on properly placing the discovered fragmentary remains and skeleton in an accurate shape. He took the lead role in the accumulation of bones; placing them in the right order and formation and fitting them in the form what originality required. Baluchitherim structure revealed astonishing features of this creature. They used a variety of techniques to assess each and every remains.

The team of scientists examined each and every part. It was very hard to decipher a correlation of different body parts, such as the skull, teeth and feet, as well as upper and lower tusks and the presence or absence of horns. The bone-mass relationship technique was applied to find the unique characteristics of this mammal. The fragments, along with the associated balance of evidence, revealed that Baluchitherium had a very heavy body supported by pillar-like limbs and with the long neck. Some remains of Baluchitherium are on display in vertebrate palaeontology gallery in the museum of the Geological Survey of Pakistan in Quetta. The reconstruction of this superlative mammal can be viewed at the Pakistan Museum of Natural History, Islamabad.

The province once used to be very green with dense forests comparable with present-day amazon. This was considered a very ideal place for mammals, such as Baluchitherium, to survive and flourish. However, due to unprecedented climatic and geological changes, Balochistan turned into the rocky deserted area from a green and verdant valley. There was no vegetation. It resulted in the extinction of this mammal and other species of impressive stature in the fight of survival. This is only known mammal whose line of ancestry is yet unknown.

This discovery reveals that the province of Balochistan was the homeland of all animal groups. More research and fieldwork is needed to unearth the palaeontological scenario of Pakistan and to determine true generic position as well as an increased understanding of this rhinoceros as a whole. This is the time to pay more serious attention. The fossil beds of this country are ready to disclose the immense wealth of ancient treasure-troves.

The writer is a Chevening Alumnus and Secretary to the Government of Balochistan (Culture, Tourism and Archaeology Department)