Libya has been embroiled in violence since a 2011 uprising that toppled and killed longtime dictator Col Moammar Gaddafi. Libya, a country of about 6.67 million people, has a largely tribal society and now suffers from civil war. In the current crisis, Libyans are just being used and manipulated by foreign powers as their pawns. The nation is torn apart by the fighting mainly between the Tripoli-based Government of National Accord (GNA) and the Libyan National Army (LNA) headquartered in Benghazi. GNA and LNA both have foreign backers which are providing them with money, arms, and fighters to fight each other. Libya, as a country and as a state, does not seem to exist anymore; it has been replaced by warring paper governments. It won’t be an exaggeration to say that nationalism is at all-time low in Libyan society and people are divided into the lines of tribes, regions, and political affiliation. At this crucial juncture when the nation is on the verge of disintegration. Libyans should remember their national hero Omar Al-Mukhtar also known as Sidi Omar and his vision of free and united Libya. This legendary figure will always remain an icon for nationalism not only in Libyan society but for the whole Arab world. 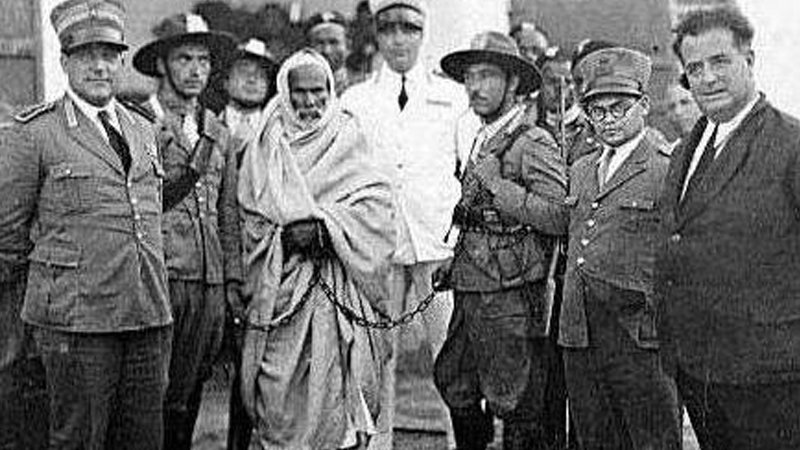 Omar Al-Mukhtar was born somewhere between 1856 and 1862 to a poor family in the town of Zanzur near Tobruk. He lost his father when the latter died making the journey to the holy city of Mecca in Saudi Arabia to perform the Hajj pilgrimage. Mukhtar received his early education at the local mosque and then studied for eight years at the Senussi University at Jaghbub, which was also the headquarters of the Senussi Movement. Omar spent his youth studying Islam and became a hafidh at a young age. He spent many years as a teacher of the Quran until 1911 when Italian forces invaded Libya. Now in his fifties, Mukhtar’s life was about to take a new turn. Determined to defend his nation from what Italian fascists described as the Roman Reconquista. Omar and his small groups of rebels skillfully attacked outposts, ambushed troops, and cut critical supply routes, astonishing and embarrassing the highly advanced Italian Royal Army. For the next two decades, Al-Mukhtar led the Libyan resistance against the Italian occupiers, who suffered heavy losses as a result of his novel hit-and-run guerrilla tactics. Omar always fought against oppression and exploitation. His armed struggle first began against British forces deployed along Egypt’s border with Libya. He also fought French colonial forces who tried to invade southern Sudan and Chad in 1900.

Foreign actors are pursuing power projection in the Libyan theatre for their own geopolitical benefit, often with detrimental effects for Libya’s stability

On Sept 16, 1931, the resistance leader now in his seventies was hanged by the Italian occupation authorities after refusing to accept their terms of surrender. Ever since Omar became a popular transnational icon in Africa and the Arab world, Omar picked up the arm to defend his motherland from foreign invaders and not to gain any political power. Al-Mukhtar awakened among his follower’s love for their country and a strong sense of nationalism. Mukhtar’s historic character has crossed the Libyan boundaries and the revolutionary leader became instrumental not only in the history of modern Libya but contributed to the formation of different forms of Arab nationalism during their struggle against colonialism. But unfortunately, now Mukhtar’s own countrymen are killing each other for grabbing power and inviting foreign powers to intervene. It’s very hard to understand how come Libyans are not realizing. That all the foreign powers which are involved in their country and are fuelling the fire of war are not at all interested in the wellbeing of Libya. These foreign backers are just interested in the looting of the wealth and oil of Libya. It’s a bitter truth that the sole enemy of Libyans today is not any foreign power but Libyans themselves. Foreign actors are pursuing power projection in the Libyan theatre for their own geopolitical benefit, often with detrimental effects for Libya’s stability. Key domestic players, in turn, rely on substantial external support to maintain their positions of relative strength.

It’s high time that Libyans take charge of their country and talk to each other to sort out all their issues among themselves. Libya is an oil-rich country; it has a small population which means it has all resources to establish a welfare state for its citizens. Libya has the wealth, educated populace, and strategic location needed to succeed. Nevertheless, if current challenges are handled adroitly, Libya could still emerge as a positive force for democratic stability in North Africa and a valuable partner against extremism. An intra-Libyan talk and negotiations which can result in the comprehensive political settlement that includes all Libyan parties is the only way forward for Libya. There is no point in printing Omar Al-Mukhtar’s picture on currency notes or naming universities and streets after him. The real tribute to Omar will be to build a united and sovereign Libya which he always dreamt of.

The author is a columnist for Middle-East and editor of geo-political news agency Views. He can be reached at manishraiva@gmail.com