A year of savagery in Kashmir 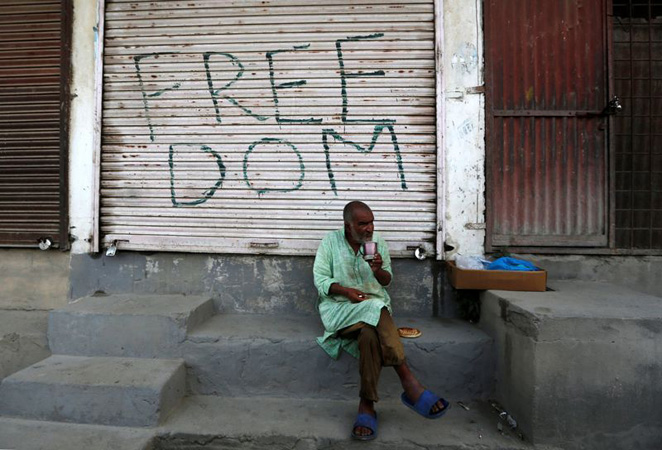 5th of August 2020 makes it one year to the siege of Kashmir; a full year of making the valley of Kashmir the biggest prison for the oppressed Kashmiris and 365 days of unimaginable living in the curfew, and nonstop cruelty at the hands of Indian Occupied forces.

Shall we ever forget such days and the part of our land, which the Quaid called as Pakistan’s jugular vein – Indian Illegally Occupied Jammu & Kashmir (IIOJK)? Isn’t it still in the chains; struggling for freedom? Don’t you think the ordeal being faced by our Kashmiri brothers and sisters has become more aching, particularly in the aftermath of August 5, 2019 when the already flawed IIOJK’s special status was revoked? Hats off to the Kashmiri people’s unconquerable will and unstoppable sacrifices that have sent shockwaves to the Indians. Is this indicative of the dawn of independence to herald sooner than later?

Last year, on August 5, 2019, India revoked the special status of Jammu & Kashmir granted by the Indian constitution. This special status gave IIOJK a privilege to safeguard the interests of Kashmiris as they could have their own flag, own constitution and their own freedom to make certain laws. It also ensured that the Kashmir land was owned only by the Kashmiris, and non-Kashmiris couldn’t get settled there. The revoking of the special status shocked the world. India sent more troops in the region and with a million troops imposed curfew to contain any confrontation. Since then India is playing a free hand to oppress the Kashmiris, especially the youth, in every possible way.

Gone are the days when the Indian constitution had enshrined the country to be a secular state. No more. It is no more a secular state in today’s India, rather it is now a Hindu extremist, RSS terrorist state that sponsors terror, not only to perpetrate inside India but also in neighbouring countries, including Pakistan, Nepal, Tibet, Sri Lanka, Bangladesh and Maldives. On August 5, 2019, the Modi government revoked Articles 35A and 370 of the Constitution, which gave an already flawed special status to the disputed territory of the state of J&K. This way, Modi sarkar through illegal action and with one stroke of pen turned the Kashmiris’ Muslim majority into minority.

On October 31, 2019, New Delhi issued a map showing IIOJK bifurcated into two union territories – J&K and Ladakh. The map identified Pakistani side of Azad Jammu and Kashmir as well as certain areas of Gilgit-Baltistan as an Indian territory. China rejected the malicious acts saying it “unlawful and void”. “India’s decision to “include” some of China’s territory into its administrative jurisdiction “challenged” Beijing’s sovereignty. Border dispute between China and India has increased tension between the two countries.

Narendra Modi, the leader of ruling BJP has accelerated anti-Kashmir moves. Implementing Hindu nationalism, he has taken various other measures such as issuance of domicile certificates to 40,000 non-Kashmiris.

His cruel actions against Kashmiris reached its peak on August 5, last year, when he imposed strict military siege deploying more than 900,000 troops. Indians have martyred so far hundreds of Kashmiris, including women and children. Curfew and military siege has resulted in shortage of food, medicines and other items. This is added with media blackout as Kashmir has been cut off from rest of the world.

According to BBC: “Unprecedented restrictions have put Kashmir into a state of lockdown. In one village the residents said two brothers were woken up and taken to an outside area. They kicked us, gave us electric shocks, beat us with cables. We screamed, they sealed our mouth with mud. We told them we are innocent, don’t beat us, just shoot us. I was asking God to take me, because the torture was unbearable.”

International community is pained. UN’s special rapporteurs said: “We remain deeply concerned about the ongoing human rights violations, excessive use of force, torture and other forms of ill-treatment reportedly committed during the arrest and detention and death in custody … We have asked the Indian government to investigate killings of several Muslim men since January 2019. A report was sent to the Indian government on May 4 over the continued deterioration of human rights conditions in occupied Kashmir”. Amnesty International said: It is “deeply concerned about the disregard for the lives of people in Jammu and Kashmir.”

PM Imran and FM Qureshi took exception to world community’s inaction for “financial interests”. During his visit to US last year, the PM said: “The Indian occupied region has been facing a clampdown since August 5. Nearly 100,000 Kashmiris have died in the past 30 years. I am disappointed by the international community. If eight million Europeans, or Christians or Jews or Americans were put under siege, you can imagine the action. The only reason why Kashmiris are subjected to this is, they’re Muslims”. COAS Gen Qamar Bajwa repeatedly warned India against the illegal action. DG ISPR in a statement said: “Indian ceasefire violations along LoC have witnessed a surge since the abrogation of the constitutional status of Indian Occupied Jammu and Kashmir. The situation along LoC is worrisome and India has violated the ceasefire agreement many times during recent times.”

Pakistanis as well as Kashmiris living in Pakistan and abroad are observing 5th of August as ‘Youm-e-Istehsal-e-Kashmir’. Conferences and rallies will be held reminding the world that the Kashmiris have not been given the rights of self-determination which was guaranteed by the UN. Will the world wake up?

The writer is freelance columnist