* In 1941, Masud joined the Indian Civil Service and proceeded to St John's College, Oxford, for further education and training 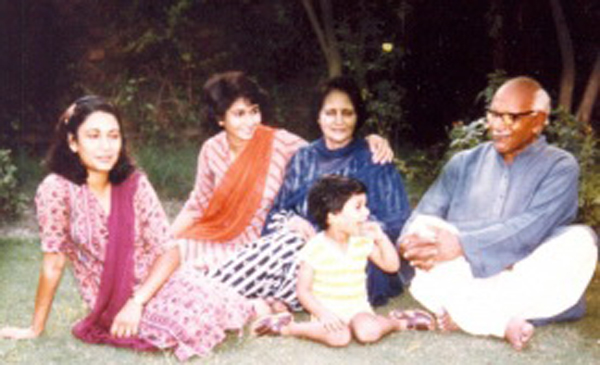 Muhammad Masud was born in Lahore on June 25, 1916 in Gumti Bazar, Inside City. His ancestors belonged to Qandhar, Afghanistan. Masud’s mother was Syeda Gul Begum from Kangra. He was the son of Dr. Ghulam Jilani, a renowned Hakeem and the personal physician to the Shah of Iran. Masud’s father was appointed ambassador by the British Government in Seestan, Iran. Since his wife refused to accompany him to Iran, she permitted Hakeem Saheb to re-marry as per the conditions of Royal Courts. He married the daughter of the Secretary to the King, Aqae Hussaini Siddique Shirazi. He had seven sons and four daughters from two marriages. Masud graduated with a Bachelor’s degree from Government College Lahore, with Arabic as a subject. He then joined Law College at the Punjab University. Masud topped in the LLB examination in 1937, breaking all previous records of the Indian sub-continent. He attributed his success to an intense physical routine of daily cycling and boxing.

Masud decided to appear in ICS Examinations. After successfully passing it, he had to appear for interview in Delhi. His friend Malik Ghulam Ali reported in his book that a group of friends tried make-up on Masud’s face to look rosy and wear a heel not to look small before appearing for interview. Justice Anwaar ul Haq is reported to have said that in 1939 only nine out of 600 candidates qualified out of which five were Muslims, including him, Saeed Jafri, Muhammad Masud, Ikram Ahmad Khan KS Islam. It was a matter of pride for Muslims. In 1941 Masud joined the Indian Civil Service and proceeded to St. John’s College, Oxford, for further education and training. Upon his return, he started his career from Ahmad Nagar in the Bombay presidency.

In Masud’s biography, Ahmad Saleem stated that Masud after having met Chudhry Rehmet Ali many times in Cambridge would carry his book Now or Never in his hand in which the word Pakistan was used for the first time

In Masud’s biography, Ahmad Saleem stated that Masud after having met Chudhry Rehmet Ali many times in Cambridge would carry his book ‘Now or Never’ in his hand in which the word Pakistan was used for the first time. Masud was engrossed in the concept of Pakistan. Chaudhry Rehmet Ali was of the view that Pakistan should struggle to liberate three to four Crores Muslims still left in India. He feared dismemberment of East Pakistan from its West Wing. He desired to see whole state of Bengal as a Muslim State. Time has proven that Chaudhry Rehmet’s apprehensions were true. Creation of Bangladesh in 1971 and oppression and massacre of Muslims in Indian Occupied Kashmir for a year on August 05, 2020 and plight of Muslims in India by Modi’s fascist government in 2019 are proofs of a great leader’s fears.

Masud joined the Indian Civil Service in 1941 and retired in 1972 in Pakistan. Throughout his Civil Service career in Pakistan, Masud wore his national dress made from handloom khaddar cloth, as an encouragement and respect for the weavers of this dying skill and to be identified as an ordinary human being, regardless of his status as a Civil Servant. He wanted to look the same as the ordinary citizen in the street and not like a superior bureaucrats with stiff necks. 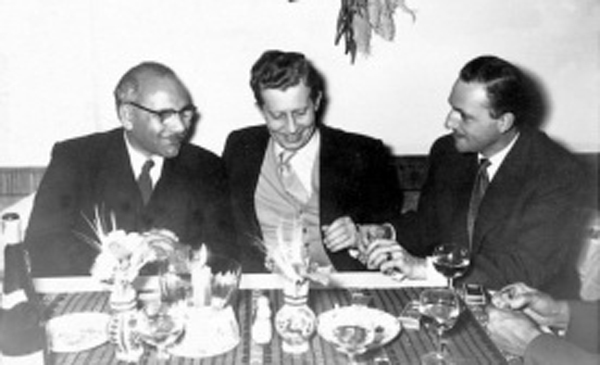 Masud had started Khaddarposhi Movement even before the creation of Pakistan when he was in Nawabshah. To help the poor Haris generate more income he encouraged to spin khaddar yarn. His aim was to install weaver loom (charkha) in every household to prepare Khaddar cloth. He requested the government funding, but not granted. Masud continued to wear the traditional dress of khaddar shalwar and kurta all his life. In Muzaffargarh as Deputy Commissioner, when Governor General paid a visit to Punjnad he wore his trademark khaddar shalwar kurta. In Lahore Gymkhana when he was made member in 1956, but refused to use its facilities due to dress restrictions, finally when Bhutto came to power and popularized national dress of shalwar kameez, Lahore Gymkhana Club was also forced to change their dress code, breaking the cult of the Goras.

From Bombay, he was sent to Khandesh to uplift and rehabilitate the Bhil Tribe. He was there for 2 years during which he lived like them in their small huts and not only gained their trust, uplifted them and revived their culture and language, but also got them freedom from the clutches of the Hindu Baniyas. M. Masud earned the sacred title of Masood Bhagwan by downtrodden Bhil Tribes

M Masud was transferred to Nawabshah as Deputy Commissioner in 1946. His role in the independence struggle was acknowledged when he accompanied Quaid-e-Azam Mohammad Ali Jinnah to Quetta and eventually persuaded the tribal chiefs and the people of Baluchistan to join in with the creation of Pakistan. In 1947, at the time of partition, M. Masud opted for Pakistan and continued at the same post in Nawabshah.

In March 1947, upon the insistence of Mohammad Ali Jinnah, a committee was formed to look into the suffering and inhuman conditions of the Sindhi Hari (peasants) and reflecting the high handedness of the feudal lords. Masud was nominated as a member of this newly formed four member Hari Inquiry Committee. The controversial reports produced by this committee in January 1948, prompted him to write his highly acclaimed and authoritative “Note of Dissent to the Hari Report” which he presented to the Government in July 1948. This note was not allowed to be published, but Yousuf Haroon after taking the seat as Chief Minister of Sindh, ordered publication in June 1949. Soon afterwards, Masud launched his struggle for land for the landless and poverty stricken people of Sindh. Soon he came to be known as “Masud Hari” throughout Sindh. In 1957, M Masud made a place for himself in the history of Pakistan, as the only man ever, to have the courage of his conviction to lead the Namaz publicly in Urdu, at Lawrence Gardens, Lahore. It was his firm belief, that the only way to effectively communicate with God, was in one’s mother tongue. Naturally it ignited the ‘Musalmaniat’ in our Mullah faction. As a result of this action, death threats by religious leaders forced the Government to send him and his family abroad for some time.

After retirement he spent his time writing and working on social issues and promoting Punjabi. He was appointed Chairman of Punjabi Adabi Board. Masud wore khaddar shalwar kurta all his life and was given the title of Khaddarposh by Muhtarma Fatima Jinnah who was a close personal friend.

Masud spoke truth and that too from his heart. In 1960, during General Ayub’s regime he once again took a stance against the Government. Putting his career at risk he wrote his strong and candid “Dissenting note on the Indus Basin Treaty” strongly condemning the sale of our rivers to India. He was arrested and taken from Karachi to appear before General Ayub. His long time close friend Qudratullah Shahab came to his aid and was able to get his release and Masud returned to Karachi after a few days.

In 1958 when Masud returned from the UK, he was appointed as the first Agriculture Census Commissioner of Pakistan. He conducted one of the most successful census reports. There has not been another one since then. In 1962 Masud also started the first Punjabi monthly magazine “Haq Allah” from Karachi. Unfortunately, due to financial constraints and a lack of Punjabi readership, it ceased publication after two years.

In 1965 M. Masud visited China on the invitation of the Government of Peoples Republic of China and was fortunate to have been given the opportunity to meet with Premier Chou En Lai. Originally scheduled for ten minutes, this meeting lasted for an hour. The purpose of Masud’s visit to China was to study the commune system in the rural sector and study the industrial development in the urban areas. During his stay in China, M. Masud visited the entire east coast of the country from north to south. Masud Khaddarposh was the founder member of “Group 83”, “Punjab Forum” and “Tehrik-e-Khushal Pakistan”. He also coined two important slogans “Be Pakistani, Buy Pakistani” also “Jerah whye oyo kahi”. In 1992, the Human Rights Commission of Pakistan gave a posthumous award to M. Masud, for services towards humanity.

I have a column in front of me written by the famous journalist Zia Shahid on Masud’s personal traits, simplicity being in the foremost. Masud was very fond of long walks. He would start walking from his house in Gulberg to his Dyal Singh Mansion office on the Mall without any break. He was fond of eating raw carrots and corn and ate them while walking. He would also serve raw vegetables at his office in the Secretariat.

Zia Shahid narrates that when he was posted as DC Muzaffargarh he was often go out dressed as an ordinary person and mix with the masses finding out their grievances, then he would call them in his office the following day and tried to resolve their matters. He became so popular that when he was transferred people gathered and raised slogans that he may not be removed as DC. When Bangladesh was created he arranged posters saying ‘Roothe Bhai Manao Seedhe Dhaka Jao’ and got them posted them on walls in the city. He desired that thousands should go to Dhaka and seek forgiveness so that Bengalis do not demand for a separate home land.

Masud was the greatest exponent of medium of instruction in the mother tongue and relentlessly pursued this cause throughout his life. He started work on the formation of the Masud Khaddarposh Trust but unfortunately, due to his sudden death in December 1985, his aim remained incomplete. Nonetheless, in accordance with his wishes, family members completed the formalities and MKT was established.

The main aim and objectives of the trust was to promote Punjabi language, literature, culture and arts. The trust has a powerful slogan ‘Jehre Maah Boli Nu Bhul Jande Nain/O! Kakhan Wangu Rul Jande Nain’. The Trust has been functioning since 1986 when it held its first award ceremony and since then it has consistently been holding annual awards. It has now been working successfully for 34 years.

M Masud was a true son of the soil, a staunch patriot and a human rights activist.

He died in Lahore on December 25, 1985 and was buried in Gulberg graveyard.