Extrajudicial killing is a bare cognizable offence under ambit of the law of land. Law enforcement agencies do not take any legal plea to defend it. Accused of any heinous crime, including murder, kidnapping, etc. has reserved the constitutional right to be dealt appropriately in accordance with law and cannot be unlawfully deprived of life. To put it simply, extrajudicial killing is a murder as per usual. 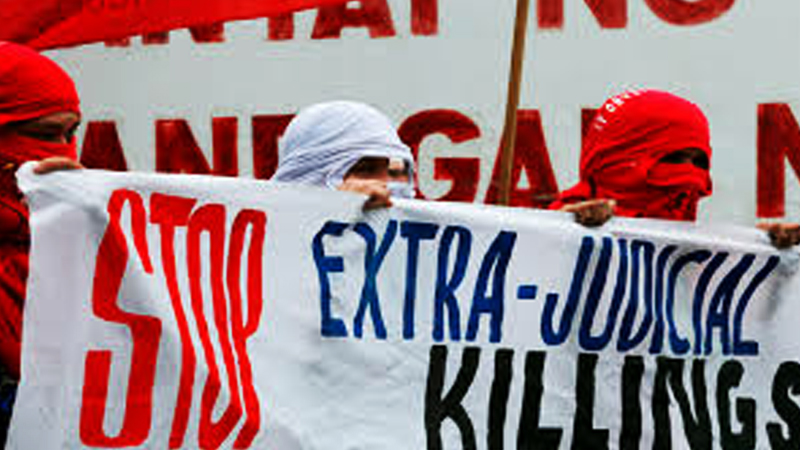 The ongoing course of criminal practice of extrajudicial killing rigorously carried out by police force is on a collision course with a few provisions of the Constitution of 1973. Article 9 and 10 A of the constitution authorizes security of right to life and due process of law of each citizen of the state. Each individual and institution specifically law enforcement agencies are constitutionally bound not to take someone’s life without appropriate pursuance of the legal course being laid down therein.

The Supreme Court of Pakistan in the case of Benazir Bhutto vs. President of Pakistan PLD 1998, 388, has also termed extrajudicial killings invalid and illegal.

There are many reasons for countering extrajudicial killings. Firstly, police are legally bound under section 166 of Police Order, 2002 to submit criminal statistics reports to federal and provincial governments with regard to the numbers of offenders, criminal proceedings and law and order situations. The killings they carry out are an enforcement of a preplanned strategy to not bring on record the files of criminal proceedings and to control the deteriorated law and order situations for the purpose to hide their failure and negligence committed by them during discharging of duty. Other rogue elements among police commit the killings for sake of lust of power, crime control ratio, to make more money, and do away with the political opponents on the directions of political elites in power.

The unlawful and unconstitutional practice of the extra judicial killings rigorously carried out by law enforcers is not a novel phenomenon. Many people have arbitrarily and brutally lost their loved ones to the reign of extrajudicial killing.

To defend the narrated claim, we can cite here unhesitatingly the heart wrenching incidents of killings committed by police and Ranger in metropolitan Karachi. Only SSP Rao Anwar, notorious for extrajudicial killings, is being accused of 444 killings, including Naqeebullah Mehsud, is a case in point.

Similarly, Punjab police is also not an exception to the unbroken series of extrajudicial killings. Custodial death of mentally ill Salahuddin Ayubi and an incident of Sahiwal are shining illustrations.

How can we expect laymen to be law abiding citizens when law enforcers become law violators?

Khyber Pakhtunkhwa (KP) is the only fortunate province wherein the incidents of encounters were very much rare. But, unfortunately, nowadays the KP may take the lead in the extrajudicial killings if it keeps going at the same pace. Ratio of the incidents of killings has been abruptly increased since Sanaullah Abbasi has been appointed as a new Inspector general of the KP police.

I build up this prediction on the basis of the few unlawful and unconstitutional incidents which took place in my hometown, Lakki Marwat, southern district of KP.

Police have put to death approximately 20 criminals, including two females, in the last five months. Their houses have been bulldozed and belongings have been taken into custody. Those who vocally opposed the reign of highhandedness of the police have been charged with false and frivolous charges and roped in fake FIRs. Many people have been subjected to the course and crime of abduction and then handed them over to the district Attock and Mianwal police. Reports of criminal incidents of similar nature are emerging out from other districts of KP as well.

I do not deny the settled fact that the people arbitrarily killed by police were criminals. But at the same time, I must state clearly and straightly the established fact that the way they have been killed by the police is unconstitutional and unlawful. Legally speaking, the duty statutorily saddled upon police is not to take someone’s life rather to rush to the site of crime, sketch site plan, conduct investigation, collect evidence of the incident and to arrest the criminal if possible.

How can we expect laymen to be law abiding citizens when law enforcers become law violators?

A set of practical steps are required to be taken to counter the reign of highhandedness of the police.

The Police Orders of 2002 authorizes an establishment of Public Safety Commission, under chapter 5 and 8, at district and provincial level. The commission is being authorized by the Order to prevent police from engaging in any illegal activity and excess or misconduct against any citizen. Similarly, sections 155 and 156 of the Order also penalize superior police officer for three years being found guilt of misconduct, torture etc. Proper implementation of the existing legal strategies can assist us in the effort to prevent police officials from taking law into their own hands.

Furthermore, on receipt of complaint of aggrieved party if a district nazim, under section 35 of the Police Order, has reason to believe that any police official has committed crime of excess or negligence in discharging of statutory duty can direct DPO to take remedial measures including registration of FIR against such official. The DPO shall also submit a report to District Nazim, within 45 days, of the action taken by him. The power being given to District Nazim under the Police Order can also prevent police from the killings and other outlawed activities if they have been exercised in true spirit and law.

Seminars shall be arranged at the level of each union council to equip the ordinary people with the knowledge of their basic rights and duties toward police.

The role of the judiciary would also help in reducing the illegal activities carried out by the police. Being a custodian of the constitution of 1973, the Peshawar High Court chief justice, Najam Seth, shall kindly take up the grave issue of extrajudicial killings with high ups of the KP police especially with the IG.

The writer is an Advocate stationed in Islamabad. He tweets at: @ziaullahkh7199