Poor planning of Dharabi and Lakhwal dams to be constructed at a cost of Rs 1.5 billion

During the tenure of former President General(R) Pervez Musharraf, several dams were completed in Chakwal, most notably the Dharabi and Lakhwal dams.

The construction of Lakhwal and Dharabi dams cost Rs. 1.5 billion. The Dharabi dam also included a project to irrigate the agricultural land of Kot Chaudhrian, the hometown of the former District Nazim Sardar Ghulam Abbas, including the surrounding areas.

Similarly, there was a plan to irrigate the areas adjacent to Lakhwal Dam but due to poor construction of these two projects the desired results could not be achieved.

Due to the collapse of the 20 km canal from Dharabi Dam to Kot Chaudhrian, the possibility of irrigating the agricultural area has also been ruled out.

Dharabi Dam is an attraction for tourists but due to the inattention of the Punjab government, there are no significant arrangements for recreation. If attention is paid to this place, Dharabi Dam can be considered as one of the major recreational centers in Punjab. 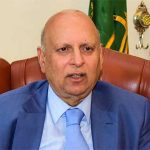