Why were Kashmiris Jubilant over Amit Shah’s Positive COVID Test?

As soon as the news of Amit Shah turning positive for COVID 19 exploded, the nerves of Kashmir inflated with happiness and joy. A palpable excitement on the faces of Kashmir was witnessed thoroughly. I was playing cricket in the open fields in my village. I had been off the phone for an hour. A friend came in rushing, conveying the news to me with such aplomb as if the UN has declared Kashmir a separate nation. Such was the curiosity and inflated mood. After I finished playing cricket, I left home. I should have had some fluid first, but I didn’t!

I drove to my room straight away, to explore my mobile phone.

As I turned the data on, to run the Facebook app, I could see the feed on the timeline with gigabytes of data, captured by Shah turning positive for COVID 19. Many of my friends on Facebook had sarcastically driven the news with encapsulated joy and torching to ecstasy.

Kashmiris are brutally trolling this. One friend wrote on Facebook, “Imagine the positive news of Amit Shah’s demise from Covid-19 on 5th August!”

Over the years, Shah’s image in Jammu and Kashmir has drifted and become associated with extreme negativity

Another friend eagerly and passionately inked on his timeline, “When God edits the guest list,” referring to Shah’s potential absence at Ayodhya due to the test turning positive. The amount of trolling is directly proportional to the quantum of anguish in Kashmiris. Shah is the central person holding the corridors of power in Delhi to whom Kashmiris considered a brutal fascist. A man tested positive for a brutal and lethal disease, which could, at certain times, be a death marker. Instead of praying and seeking recovery, why are Kashmiris going antagonistic? Why is Shah’s pain being celebrated in Kashmir? This question is analogous to why India is left with no friends in Kashmir.

Shah doesn’t make any favourable impression on almost all Kashmiris. He had the image of a staunch right wing Hindu leader – petty, narrow and rigid. His name was associated with the 2002 Gujarat riots. There were allegations galore that as a political man, he had not done his duty honestly. Some suggested that he had actually provoked Hindu extremists to go after Muslims. 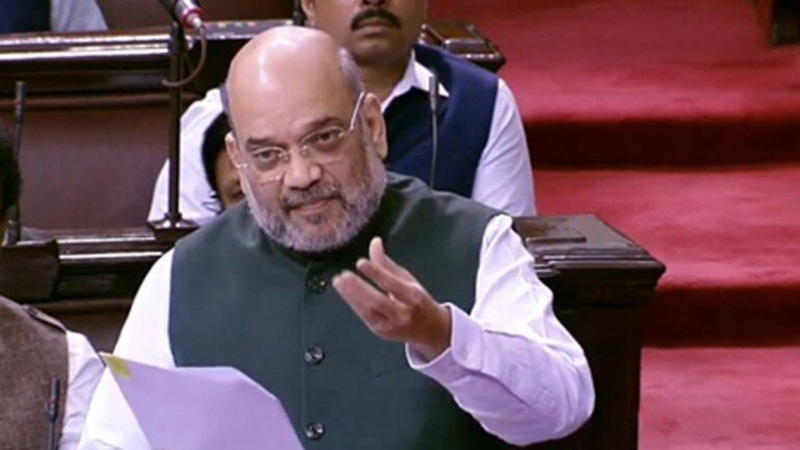 Over the years, his image in Jammu and Kashmir has drifted and become associated with extreme negativity. He is seen as the man who stripped Jammu and Kashmir of its special status. As Shah took over the realms of power, there were regular shows of the RSS-led ideology of the exclusion of minorities and a hardcore muscular approach to politics. BJP’s Ram Mandir project is another issue that has alienated most Muslims, including Kashmiris from the party in general and Shah in particular. The demolition of the Babri Masjid at the hands of the extremists was bad enough. The BJP government’s decision to hand over the entire land to Hindu Mahasabha to build a temple to Lord Rama and the repudiation of Muslim claims has added to the general resentment against Shah in Kashmir. Many in Kashmir believe that he wants to establish a Hindutva nation, where minorities will be excluded from the national mainstream.

The people of Jammu and Kashmir have also been unimpressed with Shah ‘s development projects. This may partially be because Kashmir has seen more violence and little development during Shah’s takeover. Shah’ s actions, like banning Jamaat-i-Islami in Kashmir, have also been resented and lost it more ground. The frequent summons and NIA raids have resulted in only a few arrests but caused a lot of resentment and antagonism. Every time Shah visited Kashmir, a black day has been called and observed in the Kashmir. Students have been boycotting schools and not wearing their uniforms. Daily wagers have been unable to earn a living. His security detail is also seen as a nuisance. A lot of people talk about being stranded, of people who were delayed on their way to hospital etc. It’s not a pretty picture they conjure up. Whenever he has visited Kashmir, the state has been turned into a war zone.

Curbs are imposed, pickets are set up and barricades established. Traffic advisories are issued and crucial places are sanitised. The citizens have a great impatience for it.