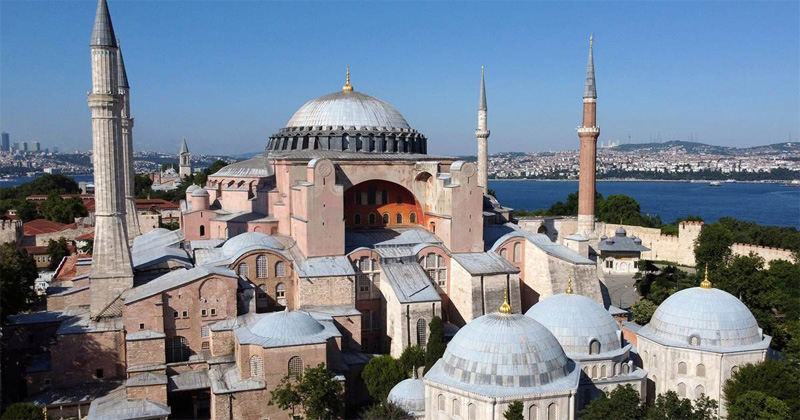 The UNESCO world heritage site, Hagia Sophia, has once again been converted to a mosque by the Turkish president, Tayyib Erdogen. Some countries like northern Cyprus support this idea while many other are saddened from this decision like USA.

Hagia Sophia has been a late antique place of worship in Istanbul, Turkey. It was built by Justinian 1, as a church between 532 to 537. It remained the world’s largest church for nearly a thousand years. After the fall of Constantinople to the Ottoman empire in 1453, it was converted to a mosque by Mehmed the conqueror. The complex remained a mosque until 1931, when it was closed to public for four years. Hagia Sofia was reopened in 1935 as a museum by the first President of Turkey, Attaturk. Finally, the present Turkish president has converted it into a mosque again.

Tayyib Erdogen faced a lot of backlash for the conversion of the museum into a mosque. People are saying, it is against Islam to convert a non-muslim worship place into a mosque. One of the example everyone gives is when Hazrat Umer (R.A), the second caliph of Islam conquered Jerusalem, he was offered to pray in the holy sepulchre. He chose not to pray there. However, no one really highlights the main reason behind not praying there was a treaty of non-muslims with caliph. Therefore, it would be wrong to pray in their worshipping spot. Nevertheless, it is permissible if the non-muslims has not agreed upon a treaty with the Muslims to accept Islamic rule.

Greece has branded Turkey’s move an “Open provocation to the civilized world”. Wasn’t converting every mosque into churches in Greece, after the Treaty of Lusanne any provocation?

The mosques built and used as Muslim places of worship during the Al-Andalus period from 711 AD to 1492 AD, when various Muslim kingdoms ruled parts of the Iberian Peninsula were converted into church or demolished after the Reconquista. No one asked to convert them back to Mosques.

Babri Masjid built by first Mughul Empire, Babar, was ordered to be handed over to a trust to oversee the construction of a Hindu Temple. No country found that as religious discrimination against Muslims.

Israel converted the Al-Ahmar Masjid into a bar last year, which is against the islamic ethics. Why no one condemned for that?

Undoubtedly, Islam is the religion of peace and love, every Muslim respect other religions and there holy places. Converting another Holy place to a mosque would be wrong if it was done forcefully or when it was against their ethics. Muslims can’t snatch other’s religious places for themselves when they have inspirations like Tipu Sultan, who built temples for Hindus, when Hindu Kings themselves destroyed their temples against Tipu Sultan, even looted them.

Before saying against Erdogen’s decision, one needs to understand some certain points. First, There is no Christian Community in the Beyoglu district of Istanbul to give the church to as 98% of Turkey is Muslim. Besides, it wasn’t a church anymore, it was a museum. Second, Christianity doesn’t have the same rules about places of worships like Islam. Their culture permits them to sell a church. Nonetheless, Islam doesn’t allow to sell a mosque and use it for different acts. Hundreds of churches in US and Europe were purchased by Muslims in the last fifty years from their congregations who owned the property and converted into mosques.

When Sultan Mehmed conquered Constantinople at the age of 21, Hagia Sophia had already been abandoned as a church. When the Sultan ended the Byzantine Empire, he purchased the property of Hagia Sophia from his personal wealth before converting it into a mosque. The details of the transaction are still stored in Turkish museum. This is the main reason why the court ordered Aya Sophia to be re-converted into a mosque.

Many people also think that the act of converting Hagia Sophia into a mosque is a political game by Tayyib Erdogen to district the public from the increasing economical crisis. Erdogen has strictly warned other countries to stay out of their internal affairs which is the right of every country. In 21st century, every country is an independent country, thus pointing at them will not do any good to your country specially without knowing the facts.