Bloodstained: Curse Of The Moon 2 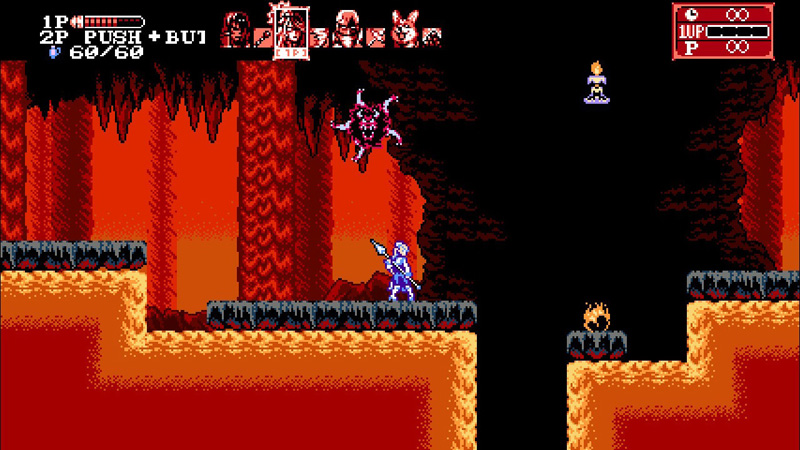 The first thing you should know about Bloodstained: Curse of the Moon 2 is that it features a playable corgi named Hachi who pilots an enchanted mecha-tank. The second thing you should know is that the classic Castlevania homage is in every way a marked improvement over the first Curse of the Moon. In fact, silly and meme-able as it is, the corgi represents a more playful spirit in this sequel that makes the whole experience richer.

The first Curse of the Moon was a short and sweet diversion, a little treat for Bloodstained backers and a neat idea to contextualize the new franchise venture from Castlevania producer Koji Igarashi. It essentially presented an alternative history, where Bloodstained was a known retro franchise and the then-upcoming Bloodstained: Ritual of the Night was a bold reinvention a la Symphony of the Night.

For all its charms, though, Curse of the Moon played it pretty straight with its influences. The tone was moody and gothic and the heroes were stoic slabs of granite. Then Ritual of the Night came out and mixed its macabre and demonic imagery with elements that were self-consciously goofy, like giant kitten heads peeking through the castle windows. In that context, Hachi the corgi feels like developer Inti Creates embracing the cheeky oddball quality of the Bloodstained universe, now that it has been more well-defined. If you happen to die as Hachi–and how dare you, you monster–the game is sure to show a blink-and-you’ll-miss-it animation of the little dog bailing out just before his mech explodes. Hachi may be the best new addition to Curse of the Moon 2, but he’s far from the only one. With the exception of the grim samurai-like protagonist Zangetsu, each of the playable characters in the main campaign is new. There’s Dominique, an exorcist from Ritual of the Night who wields spears and healing magic; Robert, an agile sniper; and the tank-like Hachi.

Like in the first game, each character has their own lifebar and specialized abilities, but these are more differentiated and specialized than before. For example, Robert is the only character who can wall-jump and his rifle can strike threats from all the way across the screen, but it takes a moment to reload and so he isn’t ideal for threats that are closing in. Inversely, Hachi is a short-range bruiser who can walk across spikes, and while he lacks the versatility of swappable special attacks, that button instead maps to temporary invulnerability that drains the magic meter. The variety of monsters and demons means there’s usually a character ideally suited for taking them out, whether it’s Robert safely taking down an armored enemy or Hachi power-stomping a gaggle of tiny swarming demons. Though it’s an action-platformer at its core, due to a faithfully created (and pretty brutal) knockback effect it’s usually worthwhile to avoid direct damage and meet the moment with the best tool for the job. Then there’s Dominique, who adds a deceptively complex layer of strategy. She has higher jumps and longer-range attacks than Zangetsu, which at first makes her seem simply like an upgraded version of the balanced main hero. But her healing magic makes for an interesting risk-reward assessment. You can swap between the four characters at any time, and the stages are designed with both enemies and optimal paths that are best for one character’s specialty, but once a character dies the others keep going without them. That makes the ability to keep everyone alive and healthy a major advantage. Choosing to rely too much on Dominique’s superior combat abilities runs the risk of taking her out of commission, which then impacts the whole team who are deprived of her healing ability. (Zangetsu eventually gets an upgrade that makes him more unique, and less of a strictly worse Dominique.)

Thanks to that greater level of differentiation, the stages are rife with hidden nooks and secrets to explore. At first glance it still borrows the aesthetic from Castlevania 3, but the stage design is much more complex and rewarding to explore. This isn’t a “metroidvania” in the sense that there’s no large open environment to explore, but the ability to reenter completed stages with new characters who have unique traversal abilities gives it a feeling akin to that. Each stage ends with a massive boss, and while undeniably strange, these almost universally lean more toward the macabre. From a massive dragon with an Alien-like second maw and a lightning cannon in its chest to a lava wyrm, these are some of the most conventional parts of the game. Still, it is impressive how their attack patterns are so fine-tuned to allow any of the four characters to at least conceivably take them down. Almost all of them have some form of a last-gasp attack, when their life bar is drained and they decide to try to take you with them. These can be tense and frustrating since they’re so hard to predict after you’ve already defeated the boss, but they add a layer of gruesome monstrosity to the victory.

The first story campaign is on the short side, but it ends in a cliffhanger which prompts a second quest. To see the story through to its full conclusion, you’ll need to play through at least three times, and these are marked as individual episodes. The story hand-waves its way through any explanation for why these episodes–which ostensibly take place in chronological order–would involve facing the exact same bosses in the same environments. This has the effect of feeling like padding with repeated content, but that feeling is somewhat mitigated by the wealth of shortcuts and alternate paths available as your subsequent playthroughs involve different combinations of characters. The bosses are also subtly ramped up with at least one new attack pattern in each episode, and this combined with the different team compositions makes for challenges that feel fresh. Your reward for seeing the story through to the end is a unique final stage and boss, along with one particularly wacky, game-changing Easter egg that makes the whole effort worthwhile. That Easter egg owes both its story justification and its level of meta weirdness to Hachi, which is really what sets Bloodstained: Curse of the Moon 2 apart. It’s still a classic Castlevania homage at heart, but it has an eccentricity that feels right at home alongside the giant kitty-cats of Bloodstained: Ritual of the Night. When a game seems to be having this much fun at its own expense, it’s hard not to join in.