Libya Conflict: Sirte-Jufra will be a flashpoint

Turks are increasing their military involvement in support of the Tripoli-based Government of National Accord (GNA) led by Fayez Al Saraj with each passing day. GNA, now backed by the Turkish air force and thousands of Syrian mercenaries is eager to challenge General Khalifa Haftar in central Libya. After gaining control of the western regions, the GNA forces moved quickly. Taking advantage of the setbacks to Haftar’s Libyan National Army (LNA), GNA allied forces tried to advance towards Sirte and took control of its power station (30km west of the city). But this initial momentum was quickly met with stiff resistance from LNA forces, which are controlling the strategic coastal city 500-km east of Tripoli since January this year. Now the two sides are poised to square off near Sirte, where some of its largest oil fields and export terminals are located. Also, another most contested area between two warring sides is Al-Jufra airbase. Not only GNA and LNA but their main backers i.e. Turkey and Egypt are ready to confront each other in a big way for controlling Sirte and Al Jufra. With speculations running high that talks for a ceasefire have collapsed and major conflict can break out any time now. 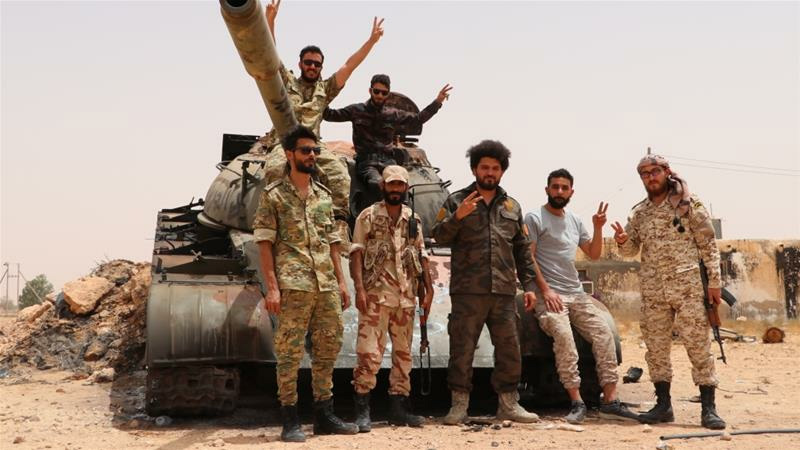 Let’s see why Sirte and Al-Jufra are so important for both warring sides. Sirte is the key to controlling Libya’s “oil crescent” region, which contributes 60 per cent of Libya’s oil exports. Sirte, which has crucial oilfields and tanker-loading facilities, is of military significance as well, being a garrison city that allows control of the Libyan coastline between Tripoli to the west and Benghazi to the east. Al-Jufra, for its part, is home to an airbase that allows domination of the entire Libyan airspace, in addition to being a key route linking the country’s south to the coastline. In sum, controlling Al-Jufra means having a say over the whole of Libya. For the Libyan National Army, Al-Jufra is also a major train-and-equip base. African mercenaries from countries such as Sudan and Chad, recruited by General Khalifa Haftar forces undergo brief training at the base before heading to front lines in the west to fight the Government of National Accord forces. Also, the oil ports of Sidra, Ras Lanuf, Marsa al-Brega, and Zuwetina can all be controlled from the city of Sirte. Al-Jufra has the largest Libyan airbase and is characterised by its strong infrastructure that has been modernised, to accommodate the new and latest weapons. Hence, both sides are putting all efforts and resources towards Sirte and Al-Jufra.

The two main external forces in Libya, Egypt and Turkey, have their vested interests in controlling these two cities of strategic importance. For Cairo, Sirte’s fall is a looming threat that Turkish-backed GNA forces should use the city as a launching point for further incursions into the east; inching ever closer to Egypt’s porous western border. Libya is, of course, Egypt’s backyard because it believes that Islamists are a part of the government in Tripoli, and has to be kept away from Libya’s region of Cyrenaica where Egypt holds considerable influence. For Turkey, controlling the largest oilfields of Libya in and around Sirte will be like gaining a cash cow that will compensate Turks handsomely. Al-Jufra is the best place for Ankara to station its fighter jets to ensure air dominance of Libyan air space.

For Turkey, controlling the largest oilfields of Libya in and around Sirte will be like gaining a cash cow

According to reports, the Libyan National Army moved their SCUD-B missiles to Sirte. Also, Russia, which is backing Haftar, has recently transferred 14 MiG-29 Fulcrum fighter jets and Su-24 Fencer bombers to Al-Jufra airbase. LNA has also deployed at the base Russian-made Pantsir air defence systems and mercenaries of the Russian Wagner group. On the other hand, the GNA forces have been gathering fighters for weeks now to march towards Sirte and Jufra. They also counting heavily on the Turkish air force and Syrian mercenaries for this campaign.

All these parties are gearing up for a major military campaign but an ordinary Libyan is paying the price of this conflict. Crime, insecurity, and corruption have been on the rise across the country. While living conditions have markedly worsened as the local economy has struggled and the provision of social and health services has nearly collapsed. This is even though Libya has the wealth, educated populace, and strategic location to succeed. Hence both parties should realize that they have a responsibility towards the common people of Libya. Stability and peace are the only things Libya wants to again stand on its feet. For that, a comprehensive political settlement that includes participation from all Libyan political parties, tribes, and important forces on the ground is required. And after achieving any durable political arrangement then only GNA or Haftar’s LNA can claim any complete victory in real sense. Libya is truly the linchpin to any comprehensive strategy to bring stability to the region. Hence every stakeholder in the region should contribute towards stabilizing the war-torn nation.

The writer is a columnist for Middle-East and Editor of a geo-political news agency, ViewsAround