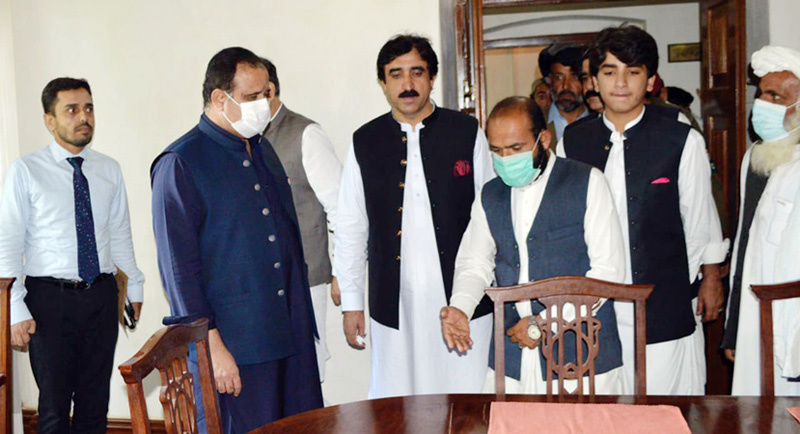 Chief Minister Punjab Sardar Usman Buzdar made a maiden visit to Kharar Buzdar, a peripheral tribal area in DG Khan, and met with ‘Muqadmeen Jirga’ and notables on Wednesday. He listened to the problems and issued directions for their solution.

While talking to them, the CM assured that every problem will be solved as he is familiar with them and pointed out that ACS (South) is accompanying him to comprehend the problems of the area. I am your brother and a custodian of your rights in Lahore, he added. He announced to give the status of the Rural Health Centre to BHU Kharar Buzdar along with setting up a rescue centre and the start of motorcycle rescue service. He also announced to launch a water supply scheme to meet the water needs of the area along with setting up a Bank of Punjab branch. While directing to early complete the construction of link roads, the CM asked to ensure transparency in the development project. The southern Punjab secretariat has been set up and the allocated 33 per cent budget will be spent on the development of the area, he said. I want development of every backward locality, he added. The Koh-e-Suleman area is full of natural beauty and the government is striving to promote tourism in this area. We have a full understanding of the difficulties of the people of Balochistan and I will contact chief minister Balochistan for the concrete pavement of link roads being used by the people of both the provinces. People thanked the Chief Minister for his visit.

The CM Usman Buzdar presided over a meeting at Buzdar House in Taunsa in which a briefing was given to him about ongoing development schemes. He directed to early complete the public welfare projects. The CM was told that a cricket stadium is being built in Taunsa with the amount of 100 million rupees to promote sports activities. Similarly, Tehsil Sports Complex Shah Suleman Stadium will be completed this year with an amount of 35 million rupees while technical training institute will promote skills-based education in the youth. The CM directed that this institute must be completed next year and announced that girls high school of Sokar town will be given the status of a higher secondary school. He also announced to upgrade the girls’ middle school of Baelani as high school. Development is the right of people living in backward areas and the government will return this right to them. The backward areas were ignored in the past but, today, they are given equal share in the journey of development, the CM added. Usman Buzdar also went to the residence of late Sardar Ather Khan Mulghani, President Taunsa Bar Association in Sokar. He offered fateha for the departed soul and extended sympathies to the bereaved family.

Chief Minister of Punjab Sardar Usman Buzdar on Wednesday sought a report from provincial health minister and secretary health on death of a minor due to polio in Ravi Town area of the city.

CM Usman Buzdar expressed grave concern over death of the child and assured people that government will take effective measures for polio eradication.

Earlier, a minor boy who was a resident of Ravi Town Lahore succumbed to the disease while undergoing treatment at the Children’s Hospital.

Polio is a highly infectious disease caused by the poliovirus mostly affecting children under the age of five.

Chief Minister Punjab Sardar Usman Buzdar has expressed a deep sense of sorrow over the death of Dr Mustafa Kamal Pasha, VC Nishtar Medical University and said that his services will be remembered for a long time. The CM has extended sympathies to the bereaved heirs and prayed to Almighty Allah to rest the departed soul in eternal peace.

He maintained that every memorable item linked with Quaid-i-Azam is more than dear to every Pakistani than his own life. He complimented that the great favour done by Quaid-e-Azam Muhammad Ali Jinnah on the nation cannot be returned and forgotten till doomsday and commended that such great leaders are born after centuries. CM underscored that the solution of Pakistan’s problems is implied in the sayings of Quaid-e-Azam Muhammad Ali Jinnah. CM met with tribal leaders and respectables of the area in Ziarat who apprised him about their problems. The tribal leaders while talking with Usman Buzdar expressed their great pleasure over his arrival in Balochistan. Usman Buzdar assured them that he would resolve their problems with the cooperation of Balochsitan government and Punjab will take along Balochistan in its journey to attain progress.