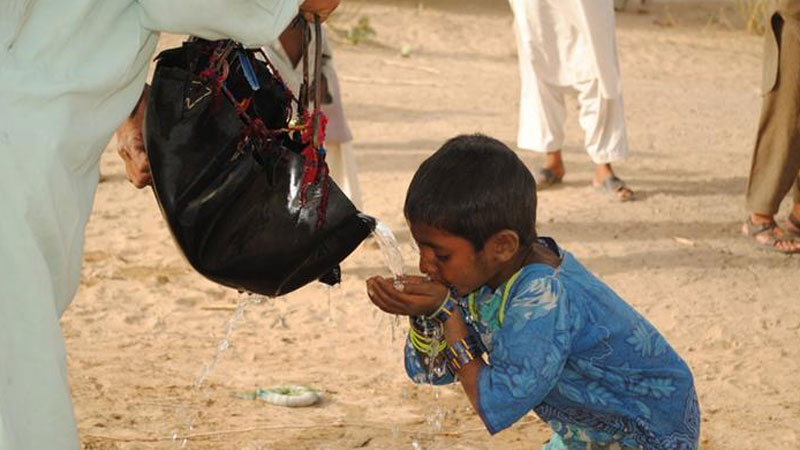 Water scarcity is a daunting challenge for the people of Thar. The largest desert of Pakistan is located in the south-east. It’s population is nearly 1.6 million, with the lowest Human Development Index(HDI) in Sindh province. Similarly, they face not only water scarcity but also food shortage, energy crisis, agricultural backwardness and inadequate infrastructure as well. Unfortunately, they are in the midst of all evils, crises and issues. They travel 4-5 km for the sake of gaining water from underground and wells for drinking and domestic purposes. It is an alarming stage. Water is an essential element for the survival for living organisms, for the agriculture purpose and also for the production of electricity. Consequently, the government is paying no attention to this unbridled growth of this crisis.

As a result, there is huge difference between demand and supply of different necessities of life. Fortunately, the Thar is blessed with precious natural resources but improper use of these resources further aggravate the situation. It is worth mentioning here that the Basic Principles of Economics is ‘resources are scarce and efficient use of these resources should be adapted so that these can bring happiness to human beings.’

Moreover, they are deprived of basic rights due to certain reasons. Resources of the Thar are mainly depended upon rainfalls. Rainfalls are considered to be backbone of Thar’s prosperity.and brings happiness among people. So, agriculture production is in direct relationship with rainfall.

In the same way, lack of reservoirs, political instability, mismanagement, disunity among people, low rainfall, overpopulation and over consumption are the major culprits in this regard.

Rainfall is limited to 100-500 mm (4-20 in) per year, mostly falling from July to September. Salt water lakes within the Thar Desert include the Sambhar, Kuchaman, Didwana, Pachpadra and Phalodi in Rajasthan and Kharaghoda in Gujarat. Sir Sayed Ahmed Khan quoted that ignorance is a mother of poverty. Hence, ignorance of the government is a mother of all issues in Thar Desert.

One recent example is the Sindh government’s proposed USD 33 million project in 2015, under which 750 reverse osmosis (RO) water purification plants were to be installed in Tharparkar. Years later, barely 400 RO plants exist and at least 70% are dysfunctional.

In 2016, when the ordeal of impure water made the headlines, the Supreme Court of Pakistan formed a Judicial Enquiry Commission (JEC). JEC submitted a report after an eight-week probe, which revealed that all filter and treatment plants were out of order in Sindh. It claimed that provincial authorities spent Rs. 29 billion on 1337 schemes of water supply and drainage during the last five years, while 582 of water supply and drainage schemes out of 1337 were non-functional.

There is no denying the fact that water scarcity leaves averse implications over energy crisis, mass destruction, abject poverty, agricultural destruction, widespread illiteracy and pulling down of economy.

The government promised but failed to fulfil funding commitments. Despite this attitude from the government, the company continued to finance the plants through its meagre resources.

People are unable to get a quality education. There is poverty and instability. The standard of their lives are going down.

How to tackle this issue?

Without surface water infrastructure and in the aftermath of consistently ineffective government schemes, the most practical way to help Tharis is constructing a canal from the Sindh district of Umerkot to Islamkot in Tharparkar.

The government should make long term as well as short term plans for curtailing water crisis by introducing new dams and reservoirs. In short term, most of the dams are under construction, so that should be accomplished as soon as possible. Besides that, in the long term, the state should introduce new small dams for the utter of water.

Currently, experts say the construction of a canal is possible and would be a welcome step in addressing the plight of the Thari people, infighting and apathy from political parties make its realisation difficult.

In the same fashion, disunity among thari people are backbone of their destruction. This archaic character has preyed them to deprivations of basic rights. Thari women have made a record with their excellent turnout in the 2018 general elections and emerged as those with the highest voter turnout ratios across Pakistan.The rain-dependent region of Thar has 574,333 are registered voters among them 254,522 are women voters. Hence, it can be said that indigenous Thari leader can bring happiness by leaps and bounds after paying concentration over social crises.

Likewise, the state must ponder over sufficient use of natural resources. It can build economically strong and great region.

By and large, it needs immediate attention to curb this issue.

The writer can be reached at Rahibalirind0@gmail.com