* Upheaval loosely completes a trilogy with his books Guns, Germs & Steel, exploring the fate of human society and Collapse: How Societies Chose to Fail or Survive 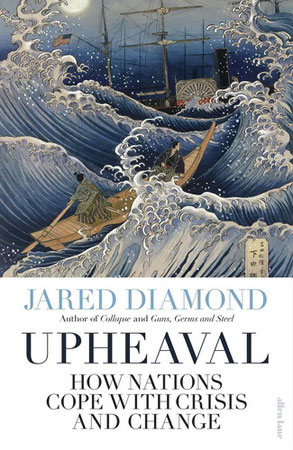 Jared Diamond is a professor of geography at University of California Los Angeles, best known for his classic Guns, Germs & Steel, awarded the Pulitzer Prize in 1998.

He draws on myriad fields, including anthropology, economics, ecology, and evolutionary biology to propose ground-breaking arguments about human civilization. He is the author of the books about comparative history, his most recent book “Upheaval: How Nations Cope with Crisis and Change” looks at trauma and considers the reasons why some nations recover and others collapse. Written from the perspective of someone who experienced firsthand the histories of six countries where he lived, breathed, and was conversing in five out of six languages except Japanese. Diamond particularly adds a psychological factor, where he combines history, politics, geography, economics, and anthropology to examine how nations and individuals react to crisis through selective change.

Upheaval loosely completes a trilogy with his books Guns, Germs & Steel, exploring the fates of human society and Collapse: How Societies Chose to Fail or Survive in which he examines what makes civilisations rise and fall. Now in the third book, Upheaval, he reveals how successfully countries have dealt with nationwide Crisis, and what we might be able to learn from them.

Professor Diamond begins his prologue with the eruption of fire, on November 1942, in Boston night club ‘Cocoanut Grove’, in which 492 people died and hundreds were injured, which was also the reason for overcrowded hospitals, not just by the wounded and dying, but also by the fire’s psychological impact on victims whose relatives, siblings, wives and husbands had died in horrible way, and also those who survived the fire but were traumatized by guilt. They felt ashamed that they were alive while a dear one dead, some were traumatized for their rest of lives and others committed suicide.

After that, in Part 1 of the book, he lists 12 psychological factors related to people, nations in navigating their own life upheavals, and adapts them to apply to nations. Some of these include “national consensus that one’s nation is in crisis”; “acceptance of national responsibility to do something”; “honest national self-appraisal”; “historical experience of previous national Crisis”; “situation-specific national flexibility.” And with each of the following chapters, he looks at several nations who have dealt with their own Crisis to varying degrees of success, and compares them with his 12 factors and where those nation stands in his 12 factors.

From Part 2 Diamond attempts to scrutinize overwhelming crisis with the real-world examples, Diamond investigates the past Crisis that have hit such countries as Finland, Japan, Chile, Indonesia, Germany, Australia and United States. Countries that he selected suffered from revolutions, political crisis either as a result of an invasion or threatened by an invasion that changes national identity. He tracks Finland in World War 2 invaded by powerful Soviet Unions in 1939; Japan threatened with invasion after centuries of isolation by the arrival Commodore Perry’s fleet of steam ships with cannons in 1853 which forcibly ended Japans isolation and launched Japan on a decade’s long process of westernization to be able to resist the west while still maintaining much of Japanese identity; Chile, a country with “a long history of democratic government” until 1973, when its government was taken over by military dictatorship in a coup by Augusto Pinochet, which was the result of “increasing polarization, violence, and breakdown of political compromise”; Indonesia’s rise from colonialism, Sukarno’s response to US by telling them ‘go to hell with your aid’, withdrew from World Bank, United Nations and International monetary by which inflation soared and Indonesia lost is currency value to 90 percent in 1965; Germanys post world war 2 rebuilding and rebranding, taking the responsibility as gravely and remotely as any nations and German’s student, after 1960’s, were taught at school about the atrocities of Nazis, even in 1970, on his visit to Warsaw Ghetto, Germanys Chancellor Willy Brandt fell down to his knees in front of Polish crowds and asked for forgiveness for Hitler’s dictatorship; and Australia’s rise from British penal colony.

Professor Diamond begins his prologue with the eruption of fire, on November 1942, in Boston night club Cocoanut Grove, in which 492 people died and hundreds were injured, which was also the reason for overcrowded hospitals, not just by the wounded and dying, but also by the fire’s psychological impact on victims whose relatives, siblings, wives and husbands had died in horrible way and also those who survived the fire but were traumatised by guilt

Using six case studies, the Soviet invasion of Finland, Commodore Perry’s arrival and modern stability in Japan, military coup in Chile, Indonesia’s evolution from colonialism to independence, post-war Germany, and Australia, he examines the challenge within each country and their respective paths towards recovery through widely used of 12 steps approach. Diamond’s comparative study defines “crisis,” traces the process of self-appraisal and adaptation, identifies patterns, and looks at ways both nations and individuals can develop greater resilience.

Toward the end of the book, Part 3, Professor Diamond takes a look at what Crisis the Japan, United States, and the world in general, might be forced to think with. What are the major problems that world faces? He identifies four major problems that can wipe us out off the planet or could undermine civilization. His choices for the worlds serious problems are; explosion of nuclear weapons, that there will be a large scale of nuclear war precipitating the whole world into nuclear winter for example the exchange between Indian and Pakistan or between the U.S and North Korea or terrorist acquiring nuclear bombs; second is global climate change, which could cook us all in next few decades; next problem is of sustainably managing world resources that are essential for us and civilization such natural resources as energy, forest, fisheries, soil, freshwater, but all of these resources being managed on sustainably at the moment and they are being depleted faster than they are generated by which we can contemplate that we can’t keep going for more than a few decades. Further Diamond points out that the first country to be affected by resources would be Japan because it is resource poor and relies on imported food to feed its citizen. And finally a major world problem that he brings up is global inequalities among the countries and its individuals around the world.

All of these crisis constitute gut wrenching histories interesting for themselves but they also raise practical questions of why some countries deal with crisis more successfully than to other countries. Practically other countries can also provide guidance for the crisis, developing in those countries. The unexpected conclusion is that individuals do learn from crisis, but countries seldom do. He also concludes that the United States is, unfortunately, a country, in which Crisis are getting worse. “There is no way that China or Mexico can destroy the US,” he writes, but then warns: “Only we Americans can destroy ourselves.”

Diamond inspects whether the United States, and the world, are extravagantly wasting their natural advantages and are on a devastating path towards catastrophe. Can we still learn from the lessons of the past?

Anyone with an interest in history, politics, psychology, or the future of the country will find much to admire in Upheaval, and Diamond’s take on how our nation might navigate its path forward is fascinating reading for anyone anxious about the state of the republic today.