Indian navy in the Persian Gulf

Muhammad Ali Siddiqi wrote in Dawn that in 2003, former Indian Prime Minister Atal Bihari Vajpayee whilst addressing a military conference emphasized on the expanding and changing nature of India’s strategic interests in an increasingly globalized world. Though the term “globalization” is yet being debated by many considering its validity in a post-COVID world. But, Vajpayee stressed on the following “security environment ranges from the Persian Gulf to Straits of Malacca”. In another instance, former Indian Navy Chief Arun Prakash said, “India’s strategic relevance ranges from the Persian Gulf to the Strait of Malacca”. The exact readiness can be seen in the US’s strategy on Indo-Pacific released last year in June. Modi’s India has seen a resurgence of sorts. 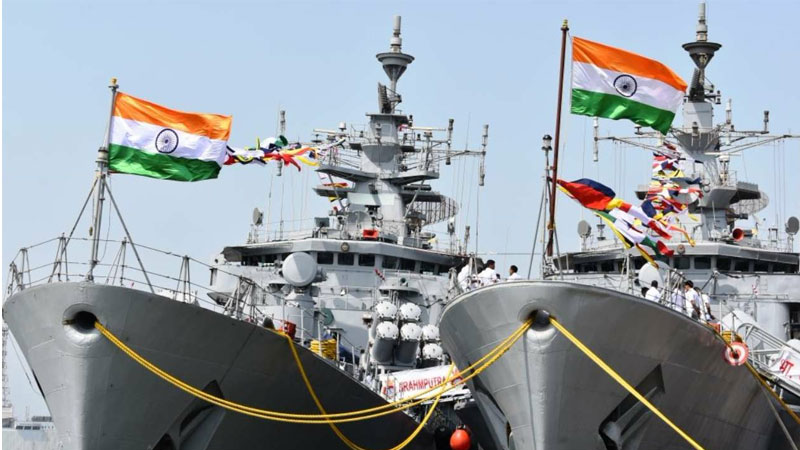 The Persian Gulf is the most crucial of all the water bodies having eight countries connected with it – Iran sharing the entire eastern border, with Qatar and Saudi Arabia to the west, Kuwait and Iraq to the North and the Southern side bordered by Oman and United Arab Emirates (UAE). The common feature of all these countries is their natural resources. But the Persian Gulf is important due to the presence of the Strait of Hormuz-as it carries one-fifth of the world’s oil, making it one of the most significant shipping lanes. The region is also fraught with regional and international tensions ranging from the global power competition of US-China, which though not connected but is exacerbated by the recent confrontation between the US and Iran. It carries a special significance for Pakistan and India separately. Before the pandemic, and now in the midst of it, the Sino-American undeclared cold war has gained an unprecedented speed.

As has been regurgitated by many, from within the Indian strategic circle, Indian aspirations to become a regional hegemon and also to acquire the status of a global superpower require an unmitigated and an unhindered access to energy resources. Along with this, Modi’s India has cemented a new ‘era’ of diplomatic clout especially with the Gulf countries. It has fostered a new kind of relation with them. This is manifested from the kind of support Modi and India have gained in the wake of the abrogation of Kashmir’s status and the atrocities committed on the Indian Muslims. As an article, published on Carnegie’s website titled “The Logic of the Rapprochement between India and the Gulf States” discusses how the Arab monarchies have compensated for more oil under India’s suspended trade ties with Iran. The Arab countries also bestowed Modi with civilian honours, after the abrogation of Kashmir’s special status. Iran, out of these Persian Gulf countries, criticized India for its treatment of Muslims.

Pakistan’s southern neighbourhood has not only been ignored but has also been left out of the basic policy framework. A reinvigoration of sorts can be seen as Prime Minister Imran Khan declared this year as the year of Blue Economy. With the China-Pakistan Corridor (CPEC) and China continuing the development of the port even during the pandemic, shows the significance of it. Due to this, the kind of threats that Pakistan faces range from traditional/non-traditional threats to reorienting its ties with the Persian Gulf nations, to changing the nature of the concept of ‘strategic depth.’

A tussle between China and India, with China offering Gulf countries a position in the Belt-Road Initiative and Modi’s diplomatic ventures, can create diplomatic avenues for Pakistan

In March 2016, Kulbushan Jadav, a serving commander in the Indian Navy, was arrested in Balochistan on charges of espionage, terrorism and sabotaging the CPEC. India took the case to the International Court of Justice (ICJ) alleging that Pakistan had violated International Law by not providing consular access to Jadav, fabricating that he took premature retirement from the Indian Navy and was arrested from Pakistan’s southern neighbour-Iran. ICJ, in 2019, rejected Indian appeals for his arrest and directed Pakistan to review his death sentence and provide consular access. Jadav, operated under the alias Hussain Mubarek Patel, working for the Research and Analysis Wing (RAW). It is not just one individual convicted of espionage in Balochistan, out of many, this is but one recent case that came to light. Last in May, seven soldiers were killed in two separate incidents in Balochistan. Pakistan has long sought international attention on Indian activities in the violence torn province that has had the lowest socio-economic rankings in surveys. Even, in the backdrop of this, Iranian and Pakistani grounds have been home to home grown and cross border terrorism.

Pakistan for more than seven decades now has masked itself in the illusion of ‘strategic depth’ stemming from Afghanistan. The two variants of the concept, militarily, in case of a confrontation with India, Pakistan could use Afghanistan as its ground has been costing it its natural geographic advantages. The non-military version sells the idea of fostering relations with the Central Asian Republics (CARs) to put Pakistan on the track of regional diplomacy and economic development which ultimately can be utilized through Pakistan’s southern port Gwadar, located in Balochistan. In the changing geopolitical scenario, strategic depth can only be ensured once maritime security can be given the due attention.

Akin to the Mughal rulers, who did not cater to the naval threat emanating from the sea, paving way for the British, it left Haider Ali and Tipu Sultan with almost nothing to defend the land with. Similarly, in 1971, the then Pakistani government failed to assess the same.

India having completed its “Nuclear Triad” with the patrolling of SSBN Arihant, is another threat to the Pakistan Navy that not only needs indigenous technological advancement but naval diplomacy. The development of the ports of Gwadar and Ormara, require the Pakistan Navy to cooperate with the Gulf countries. Although catering to 80 percent of the world’s oil trade, the Gulf region practically does not have navies, and as can be seen from the past experiences (UAE calling the abrogation of Kashmir as India’s internal matter, and inviting it to a conference in February) itself is an issue that needs to include the cultivation of relations with these countries.

In particular, it can also be seen that the Iranian and Pakistani naval chiefs vowed to reaffirm the naval cooperation in December, 2019 with a small naval exercise in January, 2020. Pakistan though promised neutrality, in the US-Iran conflict, it however, requires a focus on the Gulf countries, particularly Iran, to secure Gwadar (in lieu of CPEC) to function to its full potential. On the other hand, India’s investments in Iran, in Chabahar, and in Afghanistan, require a focus on Pakistan-Iran ties that would ultimately secure Gwadar from any such threat in the future.

Countries, even the oil rich Gulf nations, would respond to the economic power in a post-COVID world. A tussle between China and India, with China offering Gulf countries a position in the Belt-Road Initiative and Modi’s diplomatic ventures, can create diplomatic avenues for Pakistan. With the world economies already hitting a slump, Pakistan would not only require the economic assistance of these states but regardless, its religious and sectarian considerations would need to foster and reevaluate its diplomatic ties.