Urbanization or mushroom of slums

Urbanization is increasing in the proportion of people living in towns and cities. It occurs because people continue relocating from rural areas to urban zones. Urbanization affects the physical environment through the impacts of the number of people, their activities and the increased demand on resources. Pakistan has the highest rate of urbanization in South Asia and the benefits of urbanization can only be accrued by sound public policies. A frequent traveller in central Punjab undoubtedly notices that the region bounded by Sialkot, Wazirabad, Gujranwala, Sheikhupura, Faisalabad, Sahiwal, Kasur and Lahore, has developed into a one big mushroom of urban slums. Villages and small towns have merged with adjoining cities, making huge unmanageable complexes of slummed population. The phenomenon has gradually choked the existing municipal facilities to the maximum. 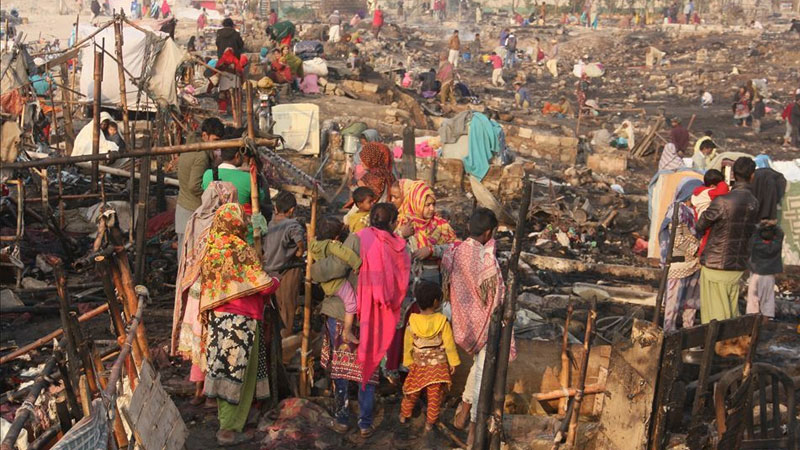 The village complex established by Mughal Empire and later during British Colonial period was a self-sufficient unit for its dwellers catering for all basic needs of life. The population growth necessitated systematic and controlled increase of civic facilities coping with the growth of population. This has unfortunately been ignored to the degree of criminal negligence. There is absolutely no capacity or authority for exercising control over building construction or encroachment of bazaars or streets within the villages or in towns. The streets and bazaars have been encroached to the criminal level for unauthorized construction. One or two Kamal residential units or a house of a family in a village during 1970s and 1980s has been subdivided into three or four Marla housing units. The agriculture and community purpose land adjacent to the villages has been encroached into unsystematically. The construction is carried out haphazardly for absence of any kind of building bylaws for rural areas.

The worst reality is the absence of sewerage facilities in these complexes turning these into slums. The old village commonly had a huge water pond supplied by canal water or filled with rain water. The sewerage of the village drained out into the village pond and normally cleaned once or twice during the year. These ponds have gradually been encroached into the villages for construction. An average village has grown four to five times of its size in the 1960s and 1970s.

There is absolutely no restriction or legal formality for conversion of agricultural land into residential areas. The village located close to small towns and markets have merged with one another making huge complexes choking all kinds of civic facilities, amenities and flow of traffic and leaving no room for any kind of future development or improvement. The development works like water supply schemes, sewerage system and construction of streets by provincial and local governments in selective rural areas from time to time loses usefulness within three to four years after execution primarily for negligence to criminal level by various government departments.

One of the causes of spreading this menace is either absence or failure to implement specific laws or jurisdiction for conversion of agriculture land into residential, commercial or industrial areas. The main traffic arteries of Central Punjab, Road Lahore – Islamabad, Road Lahore- Multan and Road Lahore- Faisalabad- are almost crammed with construction on both sides lacking all types of civic sanities. The 90 percent construction on both sides of the roads is haphazard and illegal. The surrounding villages along these arteries have merged with adjoining small towns and bus stops. The bus stops of the 1970s and 1980s combined with these village complexes have grown into a minor town.

Deforestation has progressively increased in Pakistan. According to recent studies, Pakistan has the highest rate of deforestation in Asia. In 1990, four percent of the land area of Pakistan was covered with forests, and in 2010 only two percent of the land was found to be covered with forests and continued further depletion. The loss of trees and other vegetation has caused climate change, desertification, soil erosion, fewer crops, flooding, increased greenhouse gases in the atmosphere, and a host of other problems. When forests are destroyed, the atmosphere, water bodies, and the subsurface water table are all affected.

The raw wood procured from forests was the main source of burning in Central Punjab for cooking and various other purposes till late 1980s. The drying up of rivers and resulting deforestation along the banks have deprived the masses of firewood utility items and had put extra load on electricity and natural gas sources. This mostly results in electricity theft both in rural and urban areas.

The family or individual landholding and housing units in rural areas have depleted much below the subsistence level in Central Punjab for adherence to Islamic law of inheritance. A critical survey of land holding indicates that seventy percent households own no or negligible agriculture land in Punjab. The unequal land ownership pattern is clearly reflected by the fact that a very small portion of families hold twelve acres or more of arable land. Notably, merely one percent households own greater than four acres of land in Punjab suggesting a highly skewed land ownership pattern. Resultantly, half of the population of Central Punjab is residing in slums or ‘katchi abadies’.

Urban slums are settlements, neighborhood, or city regions that cannot provide the basic living conditions necessary for the inhabitants. It is surprising, the issue is neither in attention of those at the helm of affairs nor sufficiently acknowledged or emphasized by the media. A few criticisms appear in selective print media relating to growing urbanization in Pakistan but menace of rapidly developing slums is mostly ignored.

There are basic things the government can do to prevent new slums from developing. One is to recognize that urbanization is going to happen. Sometimes governments believe that adopting alternative policies, such as focusing on rural development, will stop urbanization. The expansion of the rural areas with required municipal facilities will help to control the snowballing unplanned urbanization. Employment opportunities in rural areas are another factor to control further urbanization of mega cities.

Urban planning initiatives must consider ways of upgrading and improving the slums rather than trying to get rid of them completely as this population will play a considerable part in the growth and future of the city. Thus, in a way slums are not only inevitable, they measure the success of a city. To rehabilitate the downtrodden, the government should offer them areas where they can stay within the community and not in isolated projects and societies

The various ‘National Strategy for Accelerated Poverty Reduction in Pakistan’ concept papers give little attention to slum reduction or unplanned urbanization. The National Housing Policy exists on papers only but not implemented at all. There is a dire need for a recognition that the slums and kachi abadi people contribute positively to the economic dynamism of cities, and if enabled, communities themselves will be able to develop solutions to address their needs. Improving the lives of slums require community empowerment, good local governance, dialogue among all stakeholders and most critical strong political commitment from the state institutions.

The lack of a comprehensive policy on urbanization and urban poverty has resulted in social and structural inequalities, poor living and environmental conditions, weak access to basic services, and vulnerability to extortion and exploitation. Lack of job and residential security together with the lack of a comprehensive state policy to address their needs leaves slummed people bearing the brunt of structural and social inequalities on their lives, bodies, and health.

Eviction and the threat of eviction have many-layered effects on people who live in slums or kachi abadis settlements. There are severe psychological effects which reinforce poverty and social exclusion and its impact on the lives of the urban poor. There is an extreme obligation for respective local and provincial governments to formulate and put into operation short and long term plans to eliminate slums areas in these cities as well as from other main cities.