The specialized agency of the United Nations responsible for maintaining global public health, the World Health Organization or WHO, declared COVID-19 outbreak as a pandemic in March this year. The global economic powers, to avoid the world from sinking into the abyss of discontent and distress, made significant headways by pouring vast resources into their otherwise neglected health sectors. So severe was the blow dealt by the coronavirus that even apparently ideal health systems turned out merely a house of cards before it. Resultantly, healthcare professionals girded up their loins and remained at the forefront of grappling with the deadliest virus seen in the centuries. Some recently published reports, fortunately, claim that many countries have registered a marked decline in new coronavirus cases, partly due to timely policies implemented by the governments, and in part, its credit goes to dedication and perseverance depicted by health professionals in these testing times. It has also, however, underlined the importance of ameliorating health care systems to bring them on par with the needs of the contemporary era. 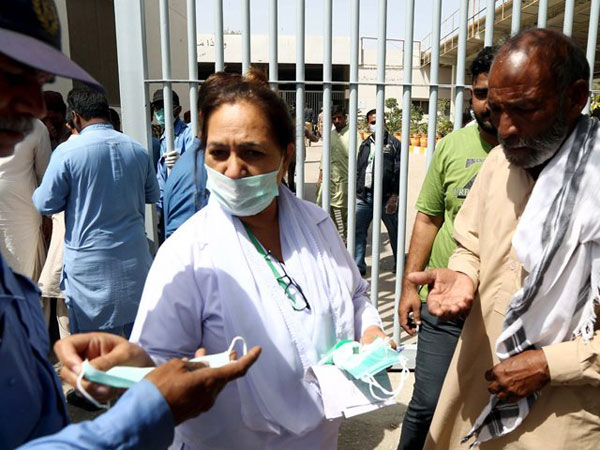 It has been 72 years since Azad Jammu and Kashmir or AJK, a self-governing jurisdiction under the administration of Pakistan, gained independence. AJK has been, since its emergence on the map of the world, facing step-motherly treatment as far as its health sector is concerned. It would not be an exaggeration to say that it remains in a virtual state of health emergency throughout the year, mainly due to its tortuous geopolitical and harsh weather conditions. There is a conspicuous absence of any tertiary care facility in the region and, hospitals too, are lacking in terms of lab facilities, beds, emergency drugs, and healthcare staff. Patients, due to the ineffective health care system, are pathetically referred to other major cities of Pakistan. Doctors, even after pursuing specialization courses, are not enjoying promising opportunities to serve back as there is a stark paucity of new slots in hospitals. There are, fortunately, or unfortunately, around four medical colleges in the region, producing as many as 400 doctors in a year, yet no effective, long-term policies are ever designed to accommodate them in the later stage of their career. Healthcare professionals, unsung heroes of any nation in a true spirit, face unending violence, intimidations, and death threats, let alone receiving acclaims for their resilience amidst the pandemic. Such a menacing environment is mainly created by relatives and other attendants of patients who pour all blame of weakness of the health system on healthcare professionals and, at times, resort to barbarity as scores of recent episodes lend credence to the fact.

Doctors are incessantly raising voice for the demands that are their basic rights. Instead of utilising their energy to serve the ailing humanity, they are being deprived of basic rights and basic facilities

In response to the recurring health crises rearing their monstrous heads, a non-political organization called the Young Doctors Association or YDA, has lately become a torchbearer in voicing its deep concerns over the absence of rights and degradation of the health infrastructure in AJK. The YDA movement ensued and gained momentum almost two months ago with a symbolic strike of black ribbons which provided a much-needed impetus to the movement, thus spreading it out and culminating in another popular token strike, a road march and later along with roadside a sit-in in front of the assembly hall in the capital city of AJK, Muzaffarabad. The YDA representatives kept highlighting their issues while, simultaneously, keeping the doors of negotiations wide open with the officials in the health department.

The YDA simply demands the pay raise of AJK healthcare professionals and bring it in parity with the pay-scales of the healthcare workers currently working in the federal government of Pakistan; a timely establishment of tertiary care hospitals equipped with latest labs and medicines; a swift creation of new slots for doctors, and promulgation of a security act for healthcare providers and service structure to overhaul the debilitating health care system. But the situation went from bad to worse when the police arrested as many as 23 doctors from the sit-in, and they were later brutally baton-charged following the orders issued by the government of AJK. Provision of emergency services by the healthcare workers was thereafter boycotted all over the region for an indefinite period, with the YDA members vowing to continue their protest as long as their demands were duly addressed. Unfortunately, instead of lending an ear to the plights of doctors, the government deployed the army and police outside hospitals, thus callously depriving the public of their basic rights to health. Today marks the third consecutive day of the closure of all health services but none of the representatives of the government has mustered enough moral courage to placate the exasperated healthcare workers and address their genuine grievances.

On one hand, where health is becoming a global preference, the government of AJK, alarmingly, seems to turn a blind eye to the complexity of the situation. A major portion of the budget is allocated to infrastructure instead of putting aside a vast sum for the health department. As per the WHO guidelines, there must be at least 1 doctor for per 1000 persons, in AJK, for a population of over 0.4 million, the number of doctors is barely in hundreds. Likewise, there must be 1 dentist over a population of 7,500 and, abysmally, there are less than 100 qualified dental surgeons in the region. Again, in the world where medicine is revolutionised through modern practice, treatment and lab facilities, in AJK people are referred to Islamabad and other cities due to lack of as basic medical facilities as computerized tomography (CT) scan and Magnetic Resonance Imaging (MRI) machines and other facilities in hospitals. In 1968, doctors had started heart transplants in the west. Here, even in 2020, patients are referred outside for procedures, like angiography and angioplasty, despite the availability of a large number of professionals. We have one of the best professionals in the medical fields, like in cardiology, nephrology, neurosurgery, and what not but they are unable to serve their best due to lack of the health infrastructure. Doctors are working for continuous shifts of 30 hours but paid lower than anywhere in the country. Sharing a horrendous incident from the Intensive Care Unit (ICU) of Isolation hospital in the capital of AJK, some attendants showed up with weapons and threatened to kill the duty staff for lack of facilities in the hospital.

Doctors are incessantly raising voice for the demands that are their basic rights. Instead of utilising their energy to serve the ailing humanity, they are being deprived of basic rights and basic facilities. Rather than providing a feasible environment to deliver their best, the government is busy in the brain drain of healthcare professionals. There is a large number of physicians, surgeons, cardiologists, and other specialists already working abroad, where they are acknowledged and highly acclaimed for their services. If this behaviour of the government is not changed shortly, the already collapsed health system will be deprived of human resources too.

The writer is a postgraduate trainee at AIMS Hospital, Ambore, Muzaffarabad, AJK