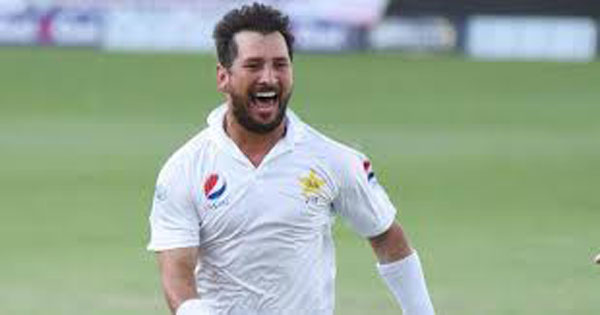 LAHORE: Pakistan’s leg-spinner Yasir Shah, while talking to media on Tuesday, revealed that he wanted to sparkle with both bat and ball during the England series. Yasir said that he wanted to score a century in England as the Men in Green continue preparations for their historic upcoming series against the hosts. In December 2019, Yasir got his name on the Adelaide Oval honours board for scoring a Test hundred at the ground, after his resilient 113-run knock in the first innings of the second Test against Australia. Yasir said that he was fired up ahead of the series since he will have the chance to turn his fortunes around in Test cricket. Pakistan are scheduled to play three Tests and three T20 Internationals against England. He admitted that his recent Test performances had not been up to expectations, but noted that he was looking to redeem himself during the Test series against. With Mushtaq Ahmed having been brought on board as Pakistan’s spin bowling coach and mentor for the tour, Yasir is looking forward to working with the legendary spinner and having a highly successful campaign. “Mushtaq has been one of my mentors. During his career as a spin bowling coach, he has helped a number of slow bowlers to become more effective.”

The 34-year-old stated that he was concentrating on his bowling and batting while expressing hope of better performances in the future. “I am hopeful for a good showing in the series against England. The weather and conditions will help Pakistan. Calling our players inexperienced is not completely true. Our young bowlers have been performing really well. Mohammad Abbas has experience playing county cricket. There are a lot of expectations from Shaheen Shah,” said Yasir. “We will get advantage because of the swing on offer in England. Googly and leg-breaks are my weapons. I am concentrating on my batting as well and will try to score a hundred in England. I am consistently practicing my skills as a batsman in the nets” he added.

The leg-spinner claimed that his confidence was back and he was ready to prove himself, supplemented with the help from spin-bowling coach Mushtaq.

“My performance was impacted by my injury. I have worked really hard to come back. My confidence is back and I am satisfied with my bowling. Bowling coach Mushtaq is giving me his undivided attention. Having him back with the team has been very beneficial. Expectations increase with good performances. I will try to reach those expectations,” he said. “Pakistan have a strong batting line-up. We are hopeful that our batsmen will do well. If the batting does well, it takes away the pressure from the bowlers,” he said while talking about the importance of batsmen putting up a good total on the board. Yasir has represented Pakistan in 39 Tests and 25 One-day Internationals (ODIs) while picking up 213 wickets and 24 wickets in each format respectively.