In recent weeks, Myanmar military launched massive offensive against the Arakan Army (AA), a rebel group seeking greater autonomy for ethnic Rohingyas in Rakhine (formerly known as Arakan) state. The month-long crackdown, according to available reports, involved indiscriminate fire and burning of villages forcing more than 10,000 people fleeing their homes. The offensive was in retaliation of the ambush carried out earlier by the AA that killed three border police and a civilian driver. According to many observers, the ultimate intent of Myanmar is to expel the entire Rohingya population.

The Myanmar military launched the “clearance operations”against the insurgents based on information that five villages around Rathedaung Township harbored AA fighters. This was essentially a repeat of how Myanmar military conducted the 2017 genocide against the Rohingyas, who fled en masse over the border to Bangladesh. The latest round of offensive has caused further displacement, hunger and increased sufferings of people in Rakhine and dimmers any hope for repatriation of over one million Rohingya refugees now sheltered in Bangladesh.

The escalating conflict and violence as witnessed over the last several weeks grabbed international headlines when Rohingyas in hundreds fled from fresh persecution in Myanmar in overcrowded boats heading toward Thailand, Malaysia and Indonesia. The lack of any substantive response to the crisis from Malaysia and the 10-member Association of Southeast Asian Nations (ASEAN) as a whole is disappointing. The Malaysian Prime Minister refused to take any more Rohingyas citing a struggling economy compounded by the Covid pandemic. The pandemic also saw a rise in xenophobic attitudes against the Rohingyas in Malaysia, who are accused of spreading the virus. Close to 200,000 refugees and asylum-seekers are registered with UNHCR in Malaysia.

According to one analyst, ASEAN’s handling of the Rohingya refugee crisis is rhetorical and “totally shameful.” When Thailand and Malaysia turned away the Rohingya boats, the people of Aceh, defying COVID-19 warnings, showed their humanity and rescued nearly 100 Rohingya refugees, including dozens of children, stranded at sea on a rickety boat for weeks. Around the time of this incident, the ASEAN met virtually for their annual summit. With Myanmar as a member state, the ASEAN neither put out any formal statement about the crisis at sea nor the ongoing situation in Rakhine state and repatriation of over a million Rohingyas from Bangladesh, a country that is even not a member of the ASEAN. As a result, the ASEAN is now faced with wide criticisms for its poor handling of the crisis by a meread hoc committee helping Myanmar in the failed repatriation of the Rohingyas from Bangladesh in 2018 and 2019. 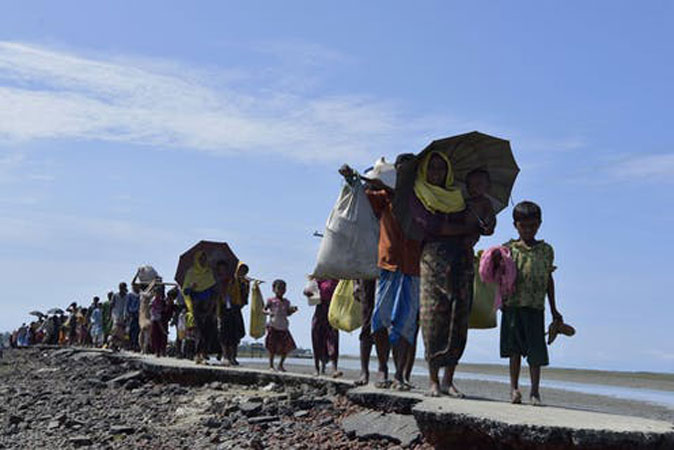 Since the military crackdown in Myanmar in 2017, the refugee crisis was regularly raised in the ASEAN meeting without any action, based on the so-called principle of “non-interference” in internal matters, and thus effectively putting the “Rohingya issue under the rug”, according to one commentator. Myanmar is on record consistently dismissing any criticisms of its treatment of ethnic minorities, including the Rohingya genocide, that has brought huge international pressure on the country – for instance, taking Myanmar and its generals before the International Court of Justice (ICJ) for atrocities against the Rohingya.

The ASEAN as a regional organization has been slow in addressing the Rohingya crisis. Its past efforts using a humanitarian approach to repatriate Rohingya refugees have failed, because the issues surrounding the Rohingya crisis are human rights issues – for instance, the citizenship right rescinded by the 1982 Citizenship Law that deprives the Rohingyas of citizenship in Myanmar due to lack of documentation and the arbitrary and largely discriminatory implementation of the law that effectively excludes most of the Rohingyas even from naturalized citizenship. As a result, according some estimates, over 3 million Rohingyas left Myanmar in the last 30 years due to systematic persecution and successive violence in 1992, 2015, 2016 and 2017; unfortunately, the plight of those inside Myanmar in detention camps as well as refugees in countries such as Bangladesh, Malaysia, India, Pakistan, Indonesia and Saudi Arabia are not over yet.

In view of the above narrative, there are two important questions to ask. First, how to prevent the so-called “boat people” from making the precarious journeys? Second, how to ensure voluntary, safe and dignified return of the Rohingyas to Rakhine state? The two questions are connected to the root cause of the Rohingya crisis and perhaps cannot be separated. The persecution and violence against the Rohingyas in Rakhine must stop. The United Nations (UN) and the European Union have expressed deep concerns for recent escalation of violence in Rakhine state; the UN says that Myanmar military may be committing new war crimes. It also called to respect international law and reiterated the need for a ceasefire due to the ongoing Covid pandemic.

The new clearance operations echo atrocities committed in 2017 against the Rohingyas and a reminder of the risks of ongoing impunity. The Myanmar military conducted the operations despite ICJ’s standing order for emergency measures to prevent genocides against the Rohingyas. This clearly demonstrates that Myanmar military has not changed and will likely continue such coordinated genocidal attacks if the world does not demand accountability. The UN and the international community must put an end to the crimes against humanity.

In a recent phone conversation with Bangladesh Foreign Minister Abdul Momen, the US Secretary of State Michael Pompeo renewed commitments to “support the voluntary, safe, dignified, and sustainable return of Rohingya refugees to Myanmar.” In order to make this happen, the Secretary Pompeo should declare the attacks on the Rohingya as genocide and crimes against humanity, take all necessary actions to hold Myanmar accountable, and work through the UN a repatriation program for the Rohingyas to their homeland with the presence of UN forces on the ground. Any measures short of this will likely shroud the Rohingya repatriation in uncertainty.