Violent confrontations have been occurring between Indian and Chinese troops along the Line of Actual Control (LAC) in the Galwan Valley. The standoff has been going on for over a month now and many experts now believe that this has all the telltale signs of becoming a new geopolitical flashpoint in the region. The two nuclear states going to war would be a disaster for the region as well as the world. Hence, the international community and the UN have been advising them to demonstrate restraint.

The route of the China-Pakistan Economic Corridor (CPEC) and Central Asia are close to the Galwan Valley. This area is also very near to the Aksai Chin Plateau, which is a territory under Chinese control but claimed by India. Happymon Jacob, a professor at Jawaharlal Nehru University has stated, “Ladakh and eastern Ladakh is crucial for China’s access to Central Asia and CPEC project with Pakistan in which they have invested billions of dollars…China is worried about it [India’s border military infrastructure] because you have a situation where China has lots of interests in that particular region.”

This conflict has instigated demands for a boycott of Chinese products within India. This could be a precursor to a weakening of trade relations. If the relations between these two behemoths worsen at a time when the world is already struggling with a Coronavirus pandemic and an economic recession, it would disrupt the already fragile stability of the South Asian region.

The Indian government is failing to perform on economic fronts; hence it has taken to a policy of appeasement regarding the xenophobes and extremists within

Further weakening India’s ‘Neighborhood First’ policy is the fact that it is also engaged in border disputes with Pakistan and Nepal. Historically, India and Nepal have enjoyed the reputation of the ‘world’s closest neighbours’, as these two countries are amongst the few in Asia that actually have open borders. However, the latter has protested over a new border road that it claims to traverse Nepalese territory. Nepal was also unhappy with the new maps that India had released following its decision to divide occupied Jammu and Kashmir into Union Territories. In reaction to this, Nepal deployed its police forces to that area, summoned the Indian high commissioner to Nepal and set in motion a Constitutional amendment that would formalize and legitimize its claims over the territory.

Nepal also redrew the border between the two countries and issued a new map that included the disputed territories within its boundary. India’s Foreign Ministry responded by declaring, “This artificial enlargement of claims is not based on historical fact or evidence and (is) violative of our current understanding to hold talks on outstanding boundary issues.” 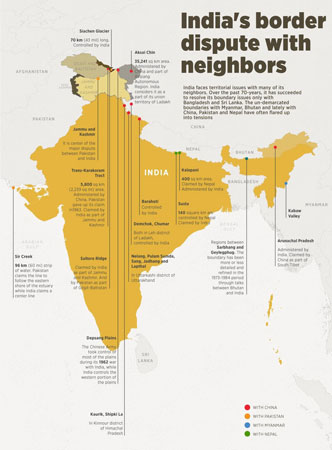 In the last 70 years, India has only succeeded in settling its border disputes with Bangladesh and Sri Lanka. Its boundaries with China, Pakistan, Nepal, Myanmar, and Bhutan have seen many skirmishes and unrest. Furthermore, Bangladesh also has recently been unhappy with its dominant neighbour, specifically since many of the BJP leaders have been terming Bangladeshi immigrants in India as ‘termites’. It is a policy failure on India’s part that arguably the largest power in the region, China, is set against India but additionally some of its small friendlier neighbours are also having issues with Indian foreign policy.

Considering the Covid-19 pandemic affecting the world right now and how badly India has been hit, it would do well to not foster border disputes with its neighbors. It needs to be focusing on helping the poverty stricken and the minorities within its borders. A study by the University of Pennsylvania, the University of Chicago and the Mumbai-based Centre for Monitoring the Indian Economy (CMIE) concluded that about 84 per cent of Indian households were suffering from a decline in income due to the pandemic.

The Indian government is failing to perform on economic fronts; hence it has taken to a policy of appeasement regarding the xenophobes and extremists within. Arundhati Roy declared, “While Modi has delivered on Hindu nationalism, he has stumbled badly on the free-market front. Through a series of blunders, he has brought India’s economy to its knees.” The present day India has become a battlefield between Hindus and Muslims. Even with the Covid-19 crisis, many of the segments of society have blamed Muslims and termed it a conspiracy. Dr. Moeed Pirzada stated, “Ram Rath Yatra, Mandal Commission, Ram Janma Bhoni movement, Attack on Babri Mosque, Demolition of Babri Mosque, Bombay riots, Nuclear Explosions of 1997, Kargil Conflict, Attack on Indian Parliament, Mobilization against Pakistan, Gujrat Pogroms, Mumbai terrorism…was skillfully utilized in redefining Indian narrative and politics moving it ever closer to the realization of a Hindu Rashtra which now exists in reality though it still needs a legal and constitutional cover.”

India’s border disputes have the potential to create ripples in the geopolitical atmosphere of the region; with wide spread consequences for all the countries within. In India’s view, the growing Chinese influence and power in the South Asian region has become deeply concerning. China considers Pakistan an economic partner and supports it in disputes against India; it has an increasing sphere of influence within Sri Lanka, Bangladesh and Nepal. If nothing else, India’s cartographic problems will definitely have a deep economic impact on India and the region.

The writer is an associate research analyst