Founded around 400 years back in 1617 by Doudpota rulers, and once called Paris of Sindh, the historic city of Shikarpur has produced many prominent and well-known humanitarians and philanthropists. They made enormous efforts and spent a substantial fortune for the welfare and betterment of human beings. A great majority of them were Hindus. Rao Bahadur Udhaw Das, a renowned polite and kind sugar trader was one of them.

Udhaw Das was born at Tara Chand’s house in Shikarpur in 1870. He was a trader who turned philanthropist when his mother became seriously sick and died due to the lack of proper medical treatment. Das was completely traumatised by the death of his mother. In Shikarpur, at that time, there was a single dispensary, which was established in 1857 and was first known as a Victoria dispensary. Then, it was called “Dhong Wari Hospital.” It had been providing the people with free-of-cost medical treatment but it was not capable of sufficiently catering to the needs of people. The situation stimulated him to do something in this regard. He decided to establish a hospital to provide free medical treatment to the people.

In 1908, Shikarpur Municipal Committee (SMC) had written a letter to the British government to establish a hospital in the city to provide healthcare services to the people. Udhaw Das came in contact with SMC and the government to ensure financial support in the establishment of a hospital. SMC had purchased a piece of land for Rs 23000 from Pir Sirhandi and also donated Rs 25000 while Udhaw Das contributed Rs 100,000 for the construction of the building, a huge amount at that time. Viewing sincere and committed efforts of Udhaw Das, some well-off Muslims were inspired to donate a sufficient amount of money. However, the contribution of Hindus was far more than those of the Muslims. 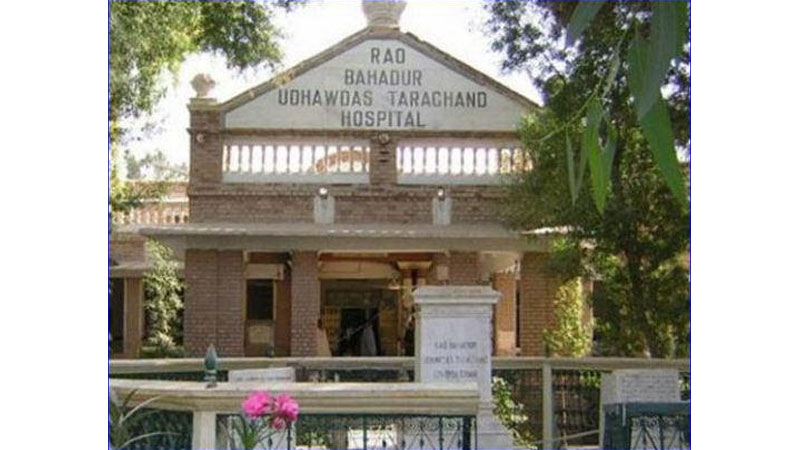 On April 30, 1933, the construction of the hospital was started after H T Soorly, the collector of Sukkur district, cut the ribbon. At the time, Shikarpur was a tehsil of Sukkur district. In 1937, Sir Lancelot, governor of Sindh, inaugurated the hospital with an elaborate opening ceremony. The hospital provided treatment, medicines, food, fruit and milk free of cost to people. The British government had honoured him with the title of “Rao Bahadur” in recognition of his service for establishing the hospital.

Udhaw Das made all possible endeavours and sacrificed everything to keep the hospital running as he cherished it like a temple. To collect funds, he had gone to Bombay, where he underwent severe difficulties and troubles as the whole Indian sub-continent was entangled in the politics of partition. Because of his persistent efforts, Udhaw Das had become seriously ill there. He was admitted at Sir Hari Kishan Hospital in Bombay for medical treatment, where he died on January 17, 1943, at the age of 73. After his death, the hospital was named Rao Bahadur Udhaw Das Tara Chand (RBUT) hospital.

To honour him, a statue of the Rao Bahadur was made and placed at the main gate of the hospital. As the problem of its security had risen due to communal violence in the late 1980s, it was shifted to the Sindh University’s Sindhology Department. Udhaw Das’s son Hari Lal had taken over the administrative control of the hospital after the demise of his father. Rao Bahadur’s family had migrated to India following the partition and Shikarpur’s municipal committee started to look after the hospital.

Udhaw Das personified lowliness and unassumingness. He inscribed his name on the steps of the hospital’s main entrance so that people crossing his name would read and remember him. Even today, his inscribed name can be seen clearly. The people, who visit the hospital, keep treading on Das’ name. 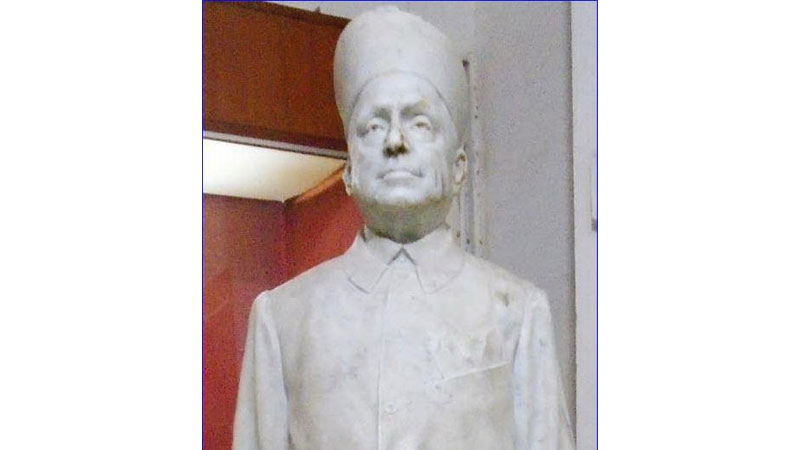 Currently, the RBUT hospital is under the administrative control of the health department government of Sindh and is a district head-quarter hospital. Unfortunately, Udhaw Das’ most cherished hospital faces a host of problems. It faces a lack of specialist doctors and an acute shortage of medicines, equipment and other inevitable medical facilities. Psychiatrists, Neuro-Physicians and Urologists, paediatricians and orthopedists have never been posted in it. Sometimes the hospital remains without a general surgeon for two to three years. Because of this lamentable situation prevailing in the hospital, even patients with minor illnesses and injuries are referred to Larkana, Sukkur and Karachi hospitals.

Although the Sindh health department allocates millions of rupees for the hospital annually, yet the poor patients are not provided with free medicines or even disposable syringes, canola and drip sets etc. Five years back in 2015, a deadly incident of suicide bombing had occurred at Imam-Bargah mosque in city Shikarpur, in which about 80 people had died and many injured. The injured people were brought to this hospital. Due to the lack of specialists and medicines, the injured could not be treated well and swiftly, which resulted in deaths of many of them.

In 2017, an NGO, Save the Children, had established Kangroo Mother Care (KMC) and stabilisation centre in the RBUT hospital for the better treatment of malnourished, premature and other children. The people of Shikarpur have not been benefiting from the facility as neonatologists, paediatricians and neonatal nurse specialists have yet not been posted there.

Udhaw Das’s hospital is in a desperate need to revive its past magnificence and spirit of the welfare of people. To provide healthcare service to the people, it should be staffed with the specialists and provided with the latest technology.