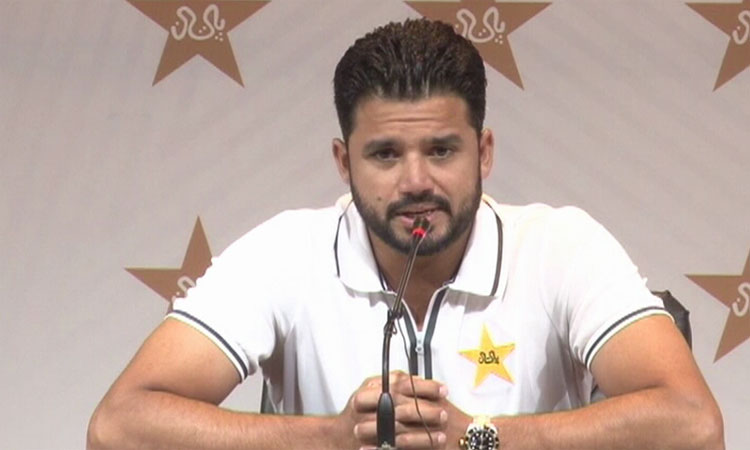 LAHORE: A 20-player Pakistan cricket squad, along with 11 member support staff, left for Manchester through a chartered flight here on Sunday morning despite novel coronavirus (Covid-19) pandemic. Upon arrival in Manchester, the squad will be transported to Worcestershire where they will undergo the England and Wales Cricket Board testing before completing their 14-day isolation period, during which they will be allowed to train and practice. The side will move to Derbyshire on July 13. Due to the outbreak of Covid-19 pandemic that has affected many parts of the globe including Pakistan and England, Pakistan left for England five weeks before the start of the Test series Before departure to England, Pakistan Test skipper Azahr Ali showed optimism of performing well during the tour of England. “On our way to another historic Pakistan tour to England. It’s always great to play in England and I look forward to get on this journey with our talented bunch of players. Fans, as always we would be in need of you prayers, love and unconditional support,” said Azahr. According to the tentative schedule, the first Test will be played on August 5 in Manchester. Pakistan will play the remaining two games in Southampton, starting on August 13 and 21 respectively. Pakistan will also play three Twenty20 internationals in Southampton on August 29, 31 and September 2.

Azhar hoped the upcoming tour of England would progress smoothly and his men would do their best to repeat the fine performances the country produced on their last two tours to England. “All the players are excited and confident for the England tour. Though a tour to England has always been challenging our performances there on the last two tours (in 2016 and 2018) are encouraging and we will try to repeat those,” Azhar told reporters during an online media talk. In 2016, Pakistan led by Misbahul Haq drew 2-2 in a four-Test series against England in their own backyard. And then Sarfaraz Ahmad-captained Pakistan drew a two-match rubber in England 1-1 in 2018.

Azhar, a veteran of 78 Tests, and his team upon reaching England will complete a 14-day quarantine and then undergo camp training before the opening Test. The PCB could not hold the training camp in Pakistan because of the rising number of coronavirus cases across the country during June. Azhar said he and his team-mates made a pact during lockdown to keep their fitness intact so that the moment cricket could resume they would all be ready. The Pakistanis haven’t played any competitive cricket since the Pakistan Super League was halted due to the Covid-19 pandemic in March earlier this year. However, with a tour of England on the horizon, some players have been working out at makeshift home gyms while those based in Lahore have been using the Qadar Academy and the head coach Misbah private net facility.

Right-handed Azhar, who has been struggling to regain batting form and to prove himself a vibrant Test captain, said though England and Pakistan teams would face off in empty stadiums, their fans would be enjoying the contests on their TV sets. “Pakistan will definitely miss the support of their own fans in England, as it is unfortunate that the matches are being held without spectators. The world sports has to operate under such circumstances for some more time. Hopefully it will end soon,” the 35-year-old Azhar said. Azhar, who regained Test captaincy in place of struggling Sarfaraz Ahmad last year, has so far led Pakistan in six Test matches, losing three and winning two of them — both at home against a lowly Bangladesh and an under-strength Sri Lanka — while one Test ended as draw.

“The prevailing conditions in England will guide us in making the strategy for the matches, as weather has had a positive impact on playing conditions that vary during the months of English summer,” said the Pakistan captain. While acknowledging that the host team had some experienced batsmen and bowlers in their ranks, Azhar said Pakistan’s pace attack was skillful and “the way youngster Shaheen Shah Afridi has improved plus Naseem Shah and Mohammad Abbas are performing, they can create problems for any team”. Azhar, who has scored 5,919 Test runs at an average of 42.58, hoped that his batsmen would be able to set totals of 300-plus, to enable his promising bowlers to do their job and win matches for Pakistan. He said Pakistan’s recent Test wins and losses were important for the team in moving forward in the direction.