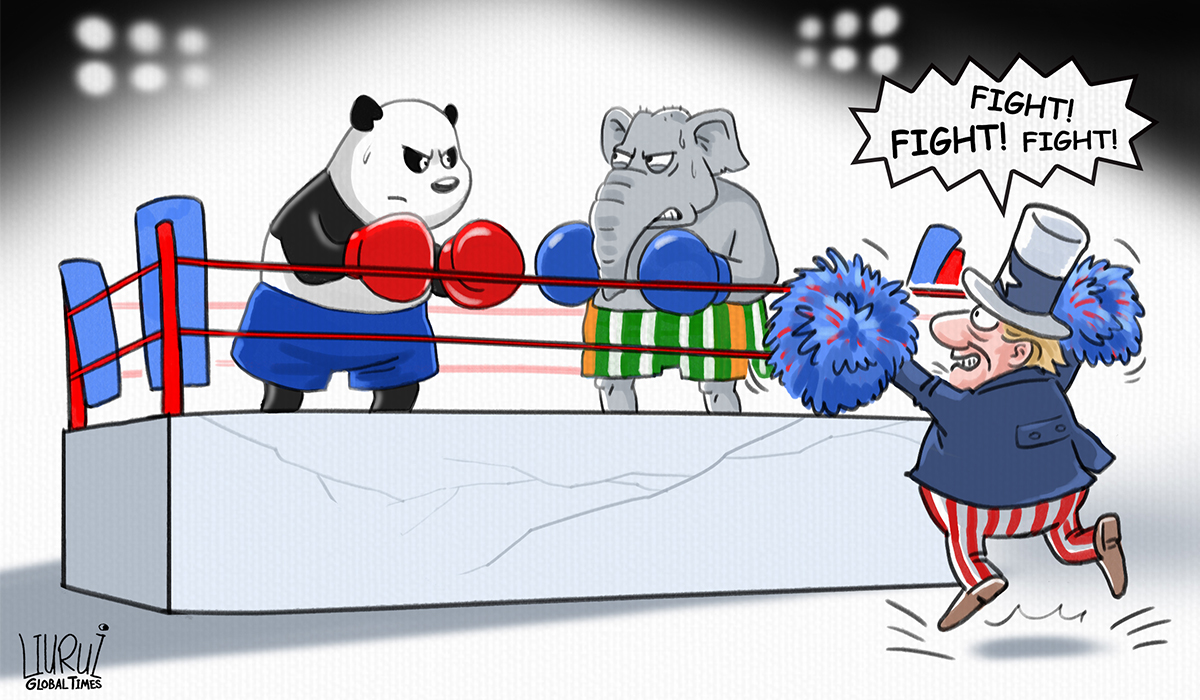 The trilateral foreign ministers’ video meeting including China, Russia and India, expected to take place on Tuesday, is anticipated to cool down recent China-India border tensions, while Indian media has given rolling coverage of India mobilizing its armed forces towards the frontline on its border in Ladakh. Chinese experts said Indian side boasting about their country having made dual preparations for military and diplomacy with China blindly optimistic, because they refuse to acknowledge the gap between India’s weaponry, deployment and equipment and those of China and India’s initial border provocations have squeezed its bargaining room in talks with China.Indian military also reportedly would give Indian troop deployed at border the freedom to use firearms under “extraordinary circumstances”, which seriously adds to the mistrust between the two sides.

Russian Foreign Minister Sergei Lavrov will host the Russia-India-China trilateral foreign ministers’ video meeting on Tuesday, India Express reported on Monday. Although the Chinese side has not confirmed the information yet, Zhao Lijian, spokesperson of the Chinese Foreign Ministry told a press conference on Thursday that the three sides are communicating regarding arrangements for the video meeting.

If the meeting is held as reported, it will be the first face-to-face talks known to the public between China and India’s foreign ministers after the deadly border clash between two troops. If senior military officials from China and India can sit down for talks in Moscow on the sidelines of the Victory Day parade on June 24, it would be a good opportunity to deescalating tensions, experts said.

Being close to both India and China, it is good for Russia to act as a bridge to promote talks between China and India on border issues, Liu Zongyi, secretary-general of the Research Center for China-South Asia Cooperation at the Shanghai Institutes for International Studies, told the Global Times on Monday.

But Russia would not involve itself too much as China and India expressed that they have various channels for military and diplomacy and the capability to solve disputes, Liu said.

Indian Defense Minister Rajnath Singh reportedly headed to Russia on Monday to attend the Victory Day Parade on June 24, Indian media reported. Information on Chinese participants has yet to be disclosed.

Against the backdrop of possible talks between senior officials, India has been reportedly mobilizing its armed forces, including its army, navy and air force, towards the frontline on its border in Ladakh, Indian media reported in the past few days. Chinese analysts said that nationalists and hardliners in India are stoking anti-China sentiment and instigating a war with China despite gap of military capability between the two sides.

As Indian infantry, artillery and engineer units are being moved to Ladakh from normally stationed locations, the present amount of troops stationed in the border region has doubled, Indian news outlet The Tribune reported on Saturday.

The Chinese military did not reveal the number of troops it has deployed in the high-altitude border region, but the figure is not expected to be any less than India’s.

Indian media reports said that the Indian Air Force deployed US-made C-17, Russian-made Il-76 and An-32 transport aircraft to airlift troops and materials from various places into Ladakh, but observers explained this is because the roads leading up to the border are in a poor condition and land transportation isn’t efficient.

In comparison, thousands of Chinese paratroopers from Central China’s Hubei Province recently made moves to Northwest China’s high-altitude region in only several hours via road, railway and civilian airliners, with no military cargo planes involved. The Chinese Air Force’s strategic transport capability has already been demonstrated during the fight against COVID-19, in which domestically developed Y-20 military cargo planes sent troops and supplies across China and to many places around the world.

According to Indian reports, India has also been using US-made CH-47 Chinook transport helicopters to transport howitzers to the frontline, while also using AH-64 Apache attack helicopters for anti-tank missions. Russian-made T-72 and T-90 tanks are believed to be India’s main armored forces.

Chinese military experts said these weapons and equipment are no match for their Chinese counterparts like the PCL-181 and PLZ-05 self-propelled howitzers, Z-10 attack helicopters, and Type 15 and Type 99A tanks, as the capabilities of Chinese weaponry in terms of firepower, mobility, level of informationization and tactics are far superior, and more so in high-altitude regions.

The Indian Navy has reportedly dispatched US-made P-8I maritime patrol aircraft to conduct aerial reconnaissance mission, a move Chinese experts said highlighted India’s lack of reconnaissance aircraft and surveillance satellite to an extend it needs to use an aircraft designed for maritime use, and its capability is bound to be restrained on land.

While these aircraft are popular products on the international market, they are no match for China’s domestically developed J-10C and J-16 fighter jets, which are equipped with powerful AESA radar systems and PL-15 beyond-visual-range air-to-air missiles. Not to mention, Chinese military’s J-20 stealth fighter jets, which has a generational advantage over Indian aircraft, is a gap that cannot be fulfilled by any means, Chinese analysts said.

Indian troops use weapons made from all over the world, which means a high logistical support cost and incompatibility between systems. India will find the maintenance and repairing of these weapons difficult in the battlefield, and the incompatibility means that many of these weapons cannot be used together or share information, and they would have to fight only loosely together in which friendly fire can become possible, a Chinese military expert who asked not to be named told the Global Times on Monday.

The Chinese troops mainly use domestically developed weapons and equipment, and they are trained for maximum efficiency in an integrated system of information sharing, which is a huge advantage in modern warfare, the expert said.

Indian observers often say that today’s India is no longer the country of 1962, and that it has developed militarily. The same goes for China, and as a matter of fact, the power gap has grown larger. For instance, China’s total military expenditure is more than three times than that of India’s in 2019, according to the Stockholm International Peace Research Institute. India cannot win a war against China, but Indian nationalists do not believe so, analysts said.

Despite the strength gap militarily, China has made full preparation for any scenarios and would swiftly adjust its policies towards India, Qian Feng, director of the research department at the National Strategy Institute at Tsinghua University in Beijing, told the Global Times.

Qian said that Indian Prime Minister Narendra Modi’s remarks on Friday that China did not “intruded” into the Indian border, actually admitted that it is Indian troop that provoked the deadly clash.