What is the color of life? Can you look at life as two distinct colors of Black and White?

Life is a mixture of both. Hence, White lives matter only when Black lives matter and vice versa. On May 25, 2020, around 8:20 am, a black man, George Floyd, yelled in pain, “I can’t breathe” as a white Minneapolis police officer pinned him down with his knee for straight eight minutes and forty-six seconds until Floyd couldn’t breathe anymore. He died of suffocation and since then there is an outrage from different community members and leaders from all over the world demanding justice for blacks. 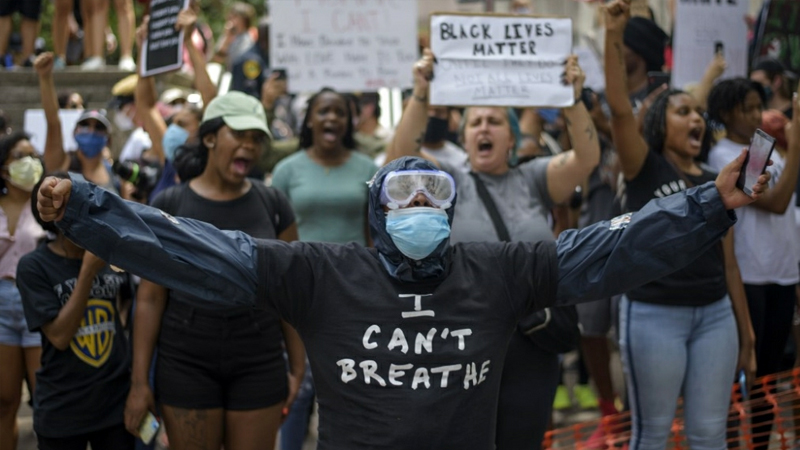 For eight minutes and forty-six seconds, we all saw in horror on our screens how life went out from Floyd’s eyes. Why? Is it because the color of life was black?

The death of Floyd is the price we paid for not confronting racism. Ironically, when the death of Floyd first broke out the Minneapolis Police Department stated it as: “Man Dies After Medical Incident During Police Interaction”. That medical incident was actually the horrific merciless act of manslaughter by the white police officer, Derek Chauvin. Thousands of people of every color and demographic are now protesting across the streets of USA and many other countries against this brutal act of racism and bigotry.

However, the significant question that arises from this debacle is why ending racism still a debate?

The binary logic of imperialism derives its existence from western socio-political thought. It enables and conditions the people to see everything in terms of binary opposition that breeds a relationship of supremacy. It establishes and regulates the relationship between colonizer and colonized; the dominant and dominated; the center and margin; the civilized and primitive; and the white and black-a contemptuous hierarchical dichotomy that nurtures violence.

The concept of race is perhaps the most calamitous binary system invented and disseminated by imperialism. This systematic racism against the yellow, brown and black is the strategy of those who want to assert their power by establishing binaries of white and non-white. It is this imperialistic racism that claimed Floyd’s life.

But racism is not only America’s most traumatic issue. It is rather a global problem meriting wider attention. The psychological force of the racist idea of “blackness” is so integrated in our minds that it has now achieved the status of objective reality in our lives and in people’s minds. This develops the social pressure of self-construction and self-image transmitted from generation to generation and consequently, gives birth to the “idea of blackness” being inferior not only in institutionalized practices but also in the psychological behavior of whites and blacks.

For eight minutes and forty-six seconds, we all saw in horror on our screens how life went out from Floyd’s eyes. Why? Is it because the color of life was black?

The United States is not the only country with this kind of racism. In fact, such racist practices were also witnessed during the apartheid movement in Africa, especially petty apartheid whereby racial segregation was practiced in daily lives.

Almost all public facilities including restaurants, toilets, beaches, buses, swimming pools, railway cars, etc.were divided into two categories of “whites-only” and “non-whites”. The underlying motive behind petty apartheid was to make the people of black race feel too inferior to be able to use even the same toilet facilities as whites. The white supremacy of people like Derek Chauvin reflects the same ho-humracism and logic of power.

‘Race’ simply would not exist if the underlying desire for hierarchical classification established by racism is eradicated. A life free of racial prejudice is what thousands of protestors are now demanding.

Because this is not just about George Floyd now, this is about Breonna Taylor who was mercilessly killed in her own home, this is about Trayvon Martin who was shot because he was an unarmed black kid, this is about Eric Garner who was choked to death by NYPD officers, this is about the systematic racism and discrimination against the blacks who have faced it for hundreds of years.

Unfortunately, instead of healing long festering wounds, the President of the United States has added fuel to the racial fire with his reckless tweet: “….when the looting starts, the shooting starts”, referring to the unrest of 1967. Evidently, centuries old racism is still alive even in the hearts of America’s political leaders and widening the gulf between people of different communities.

We all weep for those who have been made a target for having a skin color other than white. There is absolutely no room for racism in a civilized world.

So, if we don’t ever again want to go through those eight minutes and forty-six seconds of excruciating racial pain, we all must stand hand in hand and fight this system of injustice with the promise of not being prejudiced or biased by skin color which God chose for us. Our world will be stuck unless we change the system and until then there will be no rest and peace in this world.

The writer is a freelance columnist. She can be reached at javnisar@yahoo.com