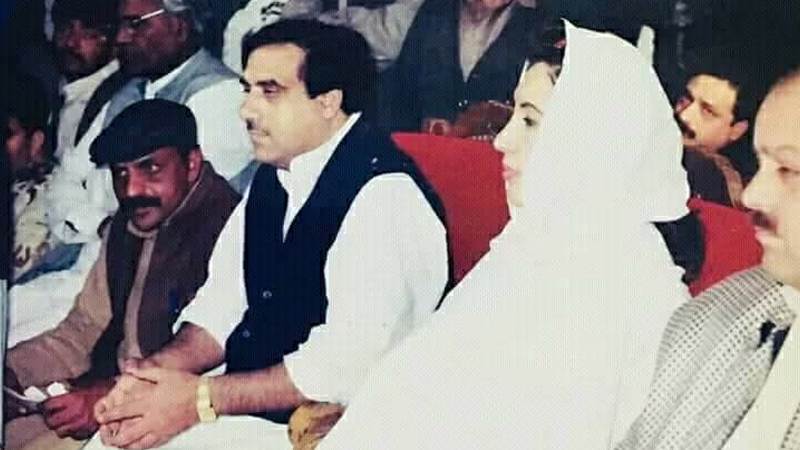 It’s her 66th birthday and she is so much missed by everyone especially the die hard worker of PPP. People got to know her importance when she left the world and I remember the last birthday was celebrated by the worker of PPP in Dubai which was organized by my father. The association of my father Dr Jehangir Bader and our family with Bhutto family goes long back more than fifty-five years, even before my birth. This is a relation of generation to generation, a relation of respect, trust, sincerity and honor. My father has an association with the leadership with three generation of Bhutto’s and served the party leadership, ten years with Zulfikar Ali Bhutto, thirty years with Shaheed Rani Benazir Bhutto and almost ten years with Chairman Bilawal and Asif Zardari.

I remember one midnight my mother woke me to go somewhere with my father. I got up and went in the car my father was driving and my mother was sitting in the front and I was sitting at the back with my cousin brothers Mubashir Jameel and Shahid Iqbal. Everyone was very excited and I was listening to everyone but could not understand where are we going in the middle of midnight. After twenty minutes’ drive we were close to Minar-e-Pakistan and saw thousands of people gathered there celebrating for some reason. My father drove the car towards no go area where the security people saw him and open the barrier and car moved on. There he asked us to come out and see this the stage, which was under construction, where Bibi will come tomorrow and address the public. I went around the stage it was huge and saw hundreds of people working on different tasks. We stayed there for little time and then came back home. I recall that thousands of workers were coming on vans, trucks, buses to our house and going towards the airport to receive Bibi on April 10th, 1986.

This was a historic day for any political leader in this history of mankind for having such a huge reception more than three million people received her. It was a difficult decision for her to decide to come back but she took the risk and came back. She had no idea what will happen. Two months back before coming to Pakistan when she was conducting meeting with senior party leaders for taking the decision for going back. It was difficult state of affairs and in her mind she was confused as all the party leaders were suggesting her different advices. Some were saying don’t go back and some were saying go quietly and have no reception. Upon the idea of returning to Pakistan she spoke to the CEC meeting, some of the excerpts from her speech is

“We had put ourselves on the line by announcing our intentions to return. The whole world would be watching. How many people do you think will meet us in Lahore? I asked Jehangir Bader, President of the Punjab PPP, who was flying back just ahead of us, ‘five lac’ he said. That’s much too high a number, I cautioned Jehangir Bader but there will be at least five lac he protested. You haven’t even left London and we have reports that people are already streaming into Lahore but we cannot be sure, I told him. If the press ask you, say that we expect one lac not five lac. That way if the crowd is estimated at four lac seventy thousand, no one can say it was smaller than expected”. My father told me about the conversation he had with her when she made up her mind for coming back. It was all about truth. She fully trusted my father and thirty years of association with her of my father where he was tested, trialed and scarified many times. My father asked her that on her arrival at Lahore airport who would receive her first. She replied “You”. He asked her who would be in the truck with you and would deliver speech before you, she again replied “you”.

Finally he argued that in case of any fatal attack on her who would be possibly be killed with her. She replied “you”. On such a response from her my father spoke at once and explained to her that he had family and children and he foresee the likelihood of such a serious attack on her life he would not be insisting her to return to Pakistan by endangering his own life. Such an attack would have been equally risky for him as well. On hearing this argument she was satisfied and promptly gave her consent to start the preparation to receive her at Lahore airport on her return to Pakistan. It was solely the effort of my father to convince her to go back to Pakistan which made history.

I met her first time few days after she arrived in the residence of Syed Faisal Saleh Hayat where she was sitting and chatting with ladies of PPP family including my mother and Azra Kharal were also there. I had pleasure of meeting her many times in our house on breakfast, lunch and dinner meetings also on the celebration function of her engagement. I went with my family on her jalsas and jaloos in different cities of Punjab. After several years I had good meeting with her in 2004 in Dubai, 2006 in London on the event of chartered of democracy, again few times in Dubai, upon her arrival in Karachi, on her first visit to Lahore in Nov 2007 after exile and had the pleasure of enjoying her truth and confidence and learning about her leadership qualities.

She had also mentioned me in her press conference in Lahore and talked about my participation in one of the rally, where I met her on truck pulled up by my father running beside the truck, in her speech on the book launching of “How to be a Leader” in Dubai. The last time I see her off with my father and Qasim Zia at the Lahore airport where we spent about an hour together and I could not imagine that was my last meeting with her. Her assassination was big loss to the world, our country, our people, to her immediate family but the loss to the PPP family.

The writer is a litigation, corporate and human rights lawyer, a political activist, and has worked as vice chairman of SAARC Young Entrepreneur Forum since 2010; he is also the life member of the SAARC Chamber of Commerce (SCCI)