India under Modi has been vocal in its Islamophobic tantrums. With the brutality against Muslims on the rise in India post-CAA protests, and the eleventh month on into the curfew in Indian occupied Kashmir, Muslims are being subjected to violence as a reason for the coronavirus spread in India. This fear of COVID-19 having ties with Islamophobia has provoked incidents of assault against them. If that weren’t enough already, a tweet by BJP MP Tejasvi Surya went viral which badly hurt even India’s friendly Arab countries. The screenshot of this tweet is making rounds on the social media earning strong condemnation from the Arab states and citizens. The tweet carries highly objectionable remarks on the sexuality of women of Arab countries and is being taken as “insulting and humiliating” as prominent citizens of Arab nations, including government officials, diplomats, businessmen and social media activists, especially Arab women, are taking to task the Indian government and the ruling BJP, demanding expulsion of Hindu workers from the Middle East. 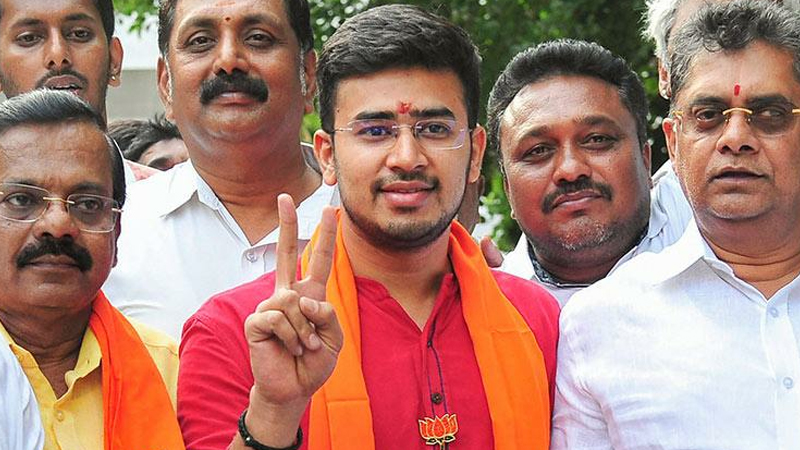 Various notable Arabs have not only criticized the hate tweet by the Indian MP but also demanded New Delhi for not only cancelling his membership but calling back Indian workers from the Gulf region. Amongst the first one to object is Nora Al Ghurair, a prominent Arab businesswoman, who has now also become vocal over the ill treatment of Muslims across India. In her response, she pitied the upbringing of the BJP MP Surya which has taught him to disrespect women. She warned him never to come to Arab lands as he won’t be welcome there.

Princess Hend Al Qassimi, a member of Sharjah’s royal family, said “the scorn and ridicule will not go unnoticed”. This is not the first time the Gulf nations have voiced against the Indian propaganda; recently a number of Indians working in the Middle East caught in hate speech and posting Islamophobic content on social media have been sacked. Princess Hend Al Qassimi also warned in her tweets that “any such Islamophobic behavior and content posting will not be tolerated and the culprit will be deported”. Another, prominent lawyer Mona Alarbash tweets: “We demand urgent and immediate accountability from [the Indian] Parliament and government. We, the Arab Muslim women, are generational educators and directors of global competencies”. She said, “Anyone that is openly racist and discriminatory in the UAE will be fined and made to leave”.

The majority of Indians working in the Gulf countries are Hindus and India has been enjoying smooth ties with these nations until recently. With the rising surge in violence against Muslims, the unending Kashmir siege and the atrocious dominance of Hindutva ideology, India is already facing seclusion due to the state sponsored human rights violations. The derogatory remark about Arab women was intended to dub “the oppressive and tyrannical Islamic reign in the Middle East” clearly indicating the prevailing Islamophobic notion of ultra-extremist Hindus. However, this is not the first remark of its kind by MP Tejasvi Surya. Back in 2014 he tweeted about “dreading” the day the Women’s Reservation Bill became a reality. He tweeted “With the exception of Women’s Reservation in Parliament, Modi Govt agenda is inspiring. Dread d day when women’s reservations becomes a reality”. Facing criticism from the Arab world, the saner Indians felt embarrassed at the misogynist and sexist comment by Surya. Congress spokesperson Sanjay Jha criticized the BJP government, saying: “Today, India stands embarrassed, humiliated.”

With the rising surge in violence against Muslims, the unending Kashmir siege and the atrocious dominance of Hindutva ideology, India is already facing seclusion due to the state sponsored human rights violations

The humiliation is grave enough as India has already topped as “the world’s most dangerous country for women”, according to a poll of global experts. India’s ranking is due to the high risk of sexual violence against women. Indian government data shows that the reported cases of crimes against women in India rose by 83% between 2007 and 2016, when there were four cases of rape reported every hour. India has revealed absolute disregard and insolence for women. International women tourists have been warned by their countries of refraining from travelling to India alone. Rape has been used as a weapon of war by the Indian security forces in Kashmir. Mass rape incidents by security forces in IOK have been recorded and reported. For hundreds of years, women in Indian subcontinent have been treated as inferior beings; they are toiling hard to acquire respect and standing in society.

The Organization of Islamic Conference (OIC) has also taken a serious note of the plight of Muslims and urged New Delhi to stop violence and discriminations against them. In a tweet, the OIC official said: “The OIC-IPHRC urges the Indian Government to take urgent steps to stop the growing tide of Islamophobia in India and protect the rights of its persecuted Muslim minority as per its obligations under international human rights law.” But despite these growing concerns by the world community and the large-scale protests by human rights activists, India has failed to cease female infanticide, rape, marital violence, sexual assault and harassment. The tweet by MP Surya is not a detached impression, rather it highlights the misogynist culture dominating in India where women are fighting for their place in society and for earning due respect for being a mother, a wife, a sister and a daughter.

So far, the Modi government has not taken any substantial action against BJP MP Tejasvi Surya; however, the Arabs do not seem to let this insult go. Will it affect India’s ties with the Gulf nations in future? That remains to be seen. Prime Minister Narendra Modi, who is already being compared with Hitler and Nazi Germany by the world community as well as international media, for the state sponsored genocide of Muslims and oppression against the minorities, is now being targeted as for supporting the Hindutva philosophy and sheltering misogynist ideology.

Narendra Modi seems to be either unable or unwilling to take any action against its MP advocating their non-concern to the gravity of the matter and how much this tirade against the Arab women has hurt not only the Gulf nations but also disgusted men and women all around the world. Clearly, despite driving India on to a sexual liberation and immensely objectifying women in their media, the lane to instilling respect for women is a long road to success for India.

The writer is a Rawalpindi-based freelance columnist and social activist